Eagles Flyers Phillies Sixers About Us Write For Us
Ghost strikes twice, Flyers down Lightning
Flyers-Lightning: By the Numbers 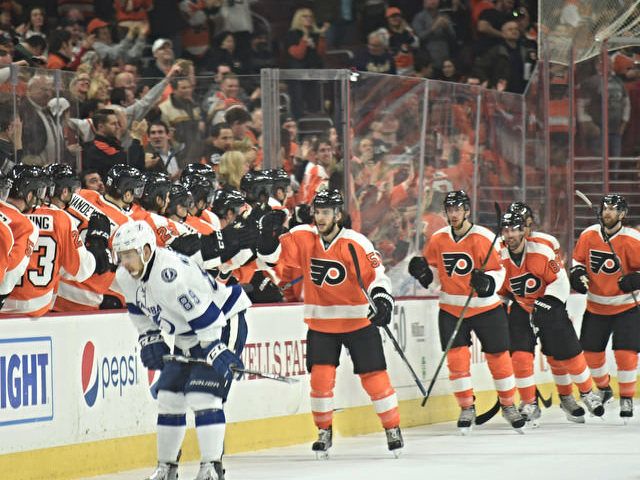 When you look across the board at the scoresheet, the big names stand out. Giroux, Simmonds, Schenn, Gostisbehere.

The four players the Flyers have seemingly relied on the most this season brought their best on Monday night. And the one who has delivered more times than most rookies usually do stole the show again.

Monday's game was as big a test as the Flyers have faced in several weeks. The Tampa Bay Lightning came in with a nine-game winning streak, four lines of scoring depth and really unfathomable records when they get the edge. The Flyers overcame it all and passed with flying colors.

"We played a good game," head coach Dave Hakstol said. "We had contributions from everybody in the lineup, and those contributions were consistent from start to finish. I thought Gostisbehere was a good part of a good team effort tonight."

"First period I think we were playing the right way," Claude Giroux said. We had our chances and it wasn’t going in. I think that’s the best game we’ve had out of not getting frustrated, staying with it, and believing if we keep playing like that we’ll get our chances. They’re very a good team, but we played a good game."

"It’s huge, just to play with a team like that," Shayne Gostisbehere said. "They are a Cup team for sure. They’re a playoff team. Just the way we carried the play tonight, it’s pretty good."

It's no secret Gostisbehere has had a flare for the dramatic and his power-play goal to put the Flyers ahead in the third was as loud as the roaring crowd after the puck beat Andrei Vasilevskiy. But Gostisbehere's first goal was possible due to the continued hard work of Sean Couturier's line with Sam Gagner and Michael Raffl.

The Flyers second period was arguably their best of the season -- 22 shots, tons of pressure, great neutral zone presences and forechecking. The only thing missing was a goal. Thanks to a hard-working and determined shift by this line, Gostisbehere proved to be the beneficiary. In the right place at the right time, Gostisbehere pounced on a chance.

"We were just moving. We were moving our feet. We were aggressive and we caught them a little flat-footed that period and we were able just to hold that momentum through the 20 minutes," Hakstol said. "Sometimes you go through a period like that and you can’t find a way to get one, and maybe a little frustration comes into play but there was none of that. Guys were just confident and just ready to go out there for their next shift."

"We weren’t frustrated. We knew we were playing really good hockey," Gostisbehere said. "We had them in the palm of our hand. It’s just showing our team. We’re sticking with it. Keep shooting and good things will happen."

In the moments after Gostisbehere's go-ahead goal, the Flyers did not take the foot off the gas. Giroux played as well as he has all season, and finished off a tremendous shift of his own with a shot that deflected off of Brayden Schenn, then Steven Stamkos and in.

When the game got tight after Tampa Bay cut the lead to one, again, the Flyers buckled down and played smart and determined hockey to get them the two points they so desperately needed, which they secured with Wayne Simmonds' empty-net tally. In this game, they truly deserved the end result and the points.

Sure, the power play wasn't at its best, hold for Gostisbehere's goal, and the Flyers had their moments where the Lightning were able to turn things around and apply pressure, but those ebbs and flows happen in a game.

Overall, holding a team as offensively potent as the Lightning are to just 18 shots is a tremendous defensive performance on any night. This is one that the Flyers can hang their hat on for a while.

"I think it is one of our best 60-minute efforts," Schenn said. "After two periods there, we were all over them. In the third, they kind of gained a little momentum, but we didn’t really panic. We stuck to our game plan and we played a good solid 60 minutes."

The test will only get tougher from here. First, the Flyers get three days to see how the rest of the standings shift. By the time they take the ice again on Friday, Detroit will play twice and the Penguins will play once. The margin may not be the two points it is now, but it will certainly be close.

The second part of this equation is a tough game in Tampa coming up on Friday. This was not the Lightning's best game, losing puck battles, turnovers and just overall domination from the Flyers at times. Tampa will play again on Tuesday before getting two days as well to rest up. It should be a determined bunch for the Lightning coming to play on Friday.

"It was a real good team effort tonight, and the guys should enjoy that for a few minutes," Hakstol said. "It’s a good win, we’ll put it in the books, enjoy it for a few minutes, and then move onto the next task and that’s what it is for our group."

"They’ll be coming out hard we’re aware of that," Giroux said. "They are a very good team, especially at home. It’s  going to be a big game for us, and we have to make sure we prepare.

"There’s a lot of games left. We played those teams in front of us, but we’ve been doing a good job at looking at the big picture and we want to keep going like that."

But on this night, as the Flyers were looking to see just where they stood, they delivered with a performance that may go down as their best of the season. It featured the top line, but the star of the show again was a Ghost.

"I didn’t expect any of this to happen. Just taking everything in stride and staying within yourself," Gostisbehere said. "It’s been a fun ride. I am learning more and more every day, no matter what. I am a sponge. I am going to keep learning and hopefully getting better."

A. The Core is Set and we just need to build around it. The Core is Doing what is Expected... Who is the Core?

The rest of the Guys are all Eligible to be traded.

B. the rest of the Players are NOT CORE and need to be moved as we are not a Playoff Winning Team. Oh sure there is a Slim Chance we could make the playoffs but,... Then What?.....

We will probably be a first round bounce out. if we make the Playoffs we will probably play The Washington Capitals, who are a SOLID Consistent Winning Team. If we want to win the First Round, we will have to be much more consistent than them. Now the Overall Lifetime record against Capitals does favor the FLYERS. You know the expression, "Some teams just seem to have another teams Number." However, The History of the FLYERS and the Capitals is just that.... Its History.... This is a Different FLYERS and a Different Capitals Team.

However,,... My Prediction is,.... The FLYERS will be about 1 to 3 points shy of making the PLAYOFFS. I Think we will Just Miss the Final Cut.

But thats just my Opinion

and I am just a Fan.