Eagles Flyers Phillies Sixers About Us Write For Us
Gostisbehere ties it late, but Panthers win in shootout
Phantoms drop 4th straight in loss to Hartford 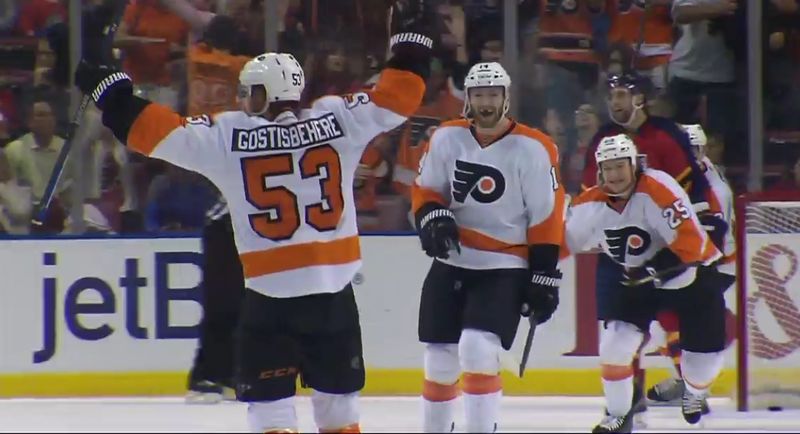 The Flyers last game on the road before the weekend in Florida was a Tuesday night game where the Flyers played extremely well and ended up on the wrong end of a 3-1 loss to the Carolina Hurricanes. On that night, there was no silver lining or moral victories for a team that had limboed between winning and losing for two weeks.

In the eight games since then, the Flyers have failed to record a point only once and been on the losing end only twice. The second of those games came on Saturday in a shootout to the Florida Panthers, but the point they earned and the way they earned it was much more of a moral victory than any other loss they have taken all season.

"We needed at least three out of four on this trip to stay in it," Ryan White said. "The boys battled hard tonight to get the extra point at the end."

"Of course we want four," Shayne Gostisbehere said, "but to get three on that road trip, back-to-back nights, I think we're definitely happy with that."

First off, when it comes to shootouts, Steve Mason feels your pain. He again used Saturday night's postgame interview to vocalize his despise of shootouts.

Love 'em, hate 'em or otherwise, it still doesn't stop pucks in the skills competition that is used to finish games. But for all of the Flyers struggles in the shootout, the seven points they have lost this year with their seven shootout losses, the Flyers have commanded the overtimes that led to the demise later.

The Flyers on Saturday took a playoff team to the brink and likely would have ended things if two things were on their side.

For one, time is no a friendly thing in overtime. Those five minutes fly off the board. The more teams adjust to the 3-on-3 format, the more cautious some teams play in an effort to get games to the shootout. The Panthers, who were 6-3 in shootouts this season, probably felt comfortable playing for the shootout. That doesn't take away the fact that they had to dodge a huge bullet of their own, killing a penalty.

Still, take the shootout away, and you'll find a team that has been stronger in the late stages of games than most of their opponents.

The second is the power play that the Panthers had to defend. At 4-on-3, that power play was missing one vital weapon.

There has been really one game in the six prior to Saturday where Jake Voracek has been out of the lineup and the Flyers could clearly and definitively say they missed his presence. The first was the team's 4-0 loss to Edmonton, where the Flyers lacked the speed and strength to keep up with the Oilers young gun forwards. The second was Saturday night, when the top power play never got things going.

The Flyers kept Claude Giroux, Wayne Simmonds and Gostisbehere on the ice for the full two minutes along with Mark Streit, playing in Voracek's usual spot. If Voracek were on the ice for that same two-minute period, or less, there probably is no shootout to speak of.

"If you would have told me we were going to get three points this weekend, I think we would have taken it," Giroux said. "We were in a situation to be able to get two points. At the end there, two-minute 4-on-3, we'll take responsibility for that one. We need to get it done. That's a really big point we need to get."

Voracek could return as soon as Tuesday, which would be just in time for the stretch run of the season with some of their most crucial games coming.

Still, to have to take a pause from the comforts of home, where they went 5-1-0 on the recent six-game homestand, and get three points on a Florida trip, which has really always troubled the Flyers, is a huge success at this time of year. At the very least, it allowed the Flyers to keep pace with the teams they are chasing as they prepare for the head-to-head matchups that await.

"Our guys battled hard. No quit and kept pushing right through to get the fourth goal and tie it up," head coach Dave Hakstol said. "It's tough to lose in a shootout but we came down on back-to-back night and we got three out of four points. We move forward."

Whomever Had the Original Thought to Include the Shootout in the NHL ought to be Whipped and chained and Waterboarded!