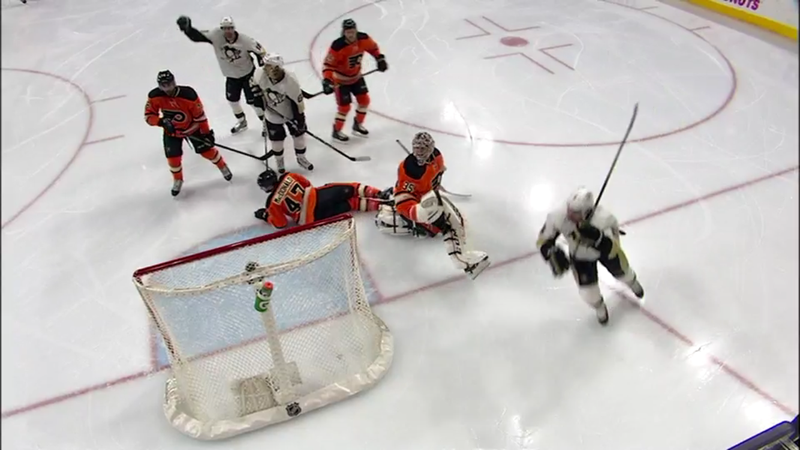 There was meaning to this game for both sides. Pittsburgh was looking to further establish a place in the playoffs. The Flyers were looking to get the edge back in the wildcard race — a win would put them back into the final spot over the Red Wings.

The Flyers flat out failed to show up.

That made for a huge setback for the Flyers, who dropped their first game in regulation in over two weeks with a 4-1 loss to the Penguins.

"Tough to explain right now," Mark Streit said. "We were really excited for this game. It was a huge game obviously. Just didn’t play our game."

"We definitely let a game go, which is a frustrating feeling for everybody," Steve Mason said. "We’ve been playing some really good hockey lately, but this afternoon wasn’t our best game."

For all the hype coming in, the Flyers very quickly watched that wither away. To be fair, both teams went through the first period with tentative play. Pittsburgh managed 11 shots, mainly with the help of two power play, but there was no real dominant effort one way or the other.

There were chances though. Twice, the Flyers had 2-on-1 chances to get the lead. On the first, Giroux laced a pass to Brayden Schenn who did have a wide open net and missed wide. Sam Gagner waited too long to make the pass across to Michael Raffl and that sent a chance by the wayside.

The shift that followed the goal was the turning point.

The Flyers got pinned in their own zone, Pierre-Edouard Bellemare tripped up a Penguin and with a delayed call, the Penguins got the puck to a wide open Trevor Daley for the goal. The Flyers led for 1:01.

From there, it was a skating clinic by the Penguins. They won all the battles, dominated control and did everything but score until Carl Hagelin was the beneficiary of a Ryan White turnover with 3:04 left in the second. Nick Bonino did all of the table-setting, assisting on both Daley's goal and Hagelin's goal.

Just 1:29 later, Chris Kunitz got a fortuitous bounce off the end boards to make it a 3-1 Penguins lead. Game. Set. Match.

"They played a good game. I am not going to go through details," Giroux said. "It looks like we couldn’t get any offense going, we had our chances. It is frustrating but we have 13 games left so let’s not worry about this one too much and be ready for the the next one."

"They played a good hockey game. It was a day where we couldn’t find any energy and we just couldn’t get ourselves going in the right direction," head coach Dave Hakstol said. "Obviously, it comes at a bad time and against the wrong team, but that’s what it is."

The Penguins dominated the neutral zone from there. The Flyers never managed more than seven shots in a period, the third, finishing with a season-low on 17 shots on goal.

The Flyers also had 17 giveaways, showing the lack of puck control they had.

For the first time in a long time, you saw the Flyers let frustration set in and fail to overcome it. This is a team that has focused so much on how they stay within the game plan and battle to the finish.

"We circled this game a long time ago. For us not to have the result we are looking for is definitely frustrating," Giroux said. "But we got to do a good job of putting this behind us and be ready for the next one.

"This group, it’s a group of workers and we just couldn’t find it today," Hakstol said. "Like I said, that’s disappointing for all of us, but at the same time, flip the page. We’re fighting for something here and we’ve got to turn our focus towards getting back at it here in two days."

The Flyers never found their skating legs and never mounted any sort of pressure on Fleury and the Penguins. Mason had a solid day in goal, making 31 saves on 34 shots and really keeping the Flyers in the game for much of the second period before everything unraveled in the final three minutes. Otherwise, every other Flyer was outplayed. Every single one.

So Pittsburgh gets the upper hand and now charges ahead in the standings by six points on the Flyers.

The Flyers now also have to wait and see if the Red Wings remain within reach. The margin is still one, but the Red Wings play in Florida on Saturday night, which could widen the margin to three points.

In the past month, the Flyers really haven't had to deal with adversity. So now the challenge for the Flyers becomes trying to overcome a clear setback starting with another contending team in the New York Islanders on Monday.

"It’s going to be a tough road trip," Mason said. "There’s going to be some tough travel involved so we got to make sure we take care of ourselves. It would be great to start it off with a win in Brooklyn."

"It’s a group that we absolutely believe in, in each other inside of that locker room. It’s a group that has battled hard for each other day in and day out," Hakstol said. "They have got nothing to prove to each other at this point in the year other than now having a short memory, flipping the page and getting right back at it on Monday night."