Pederson: ‘Sam Bradford is the No. 1 quarterback’ 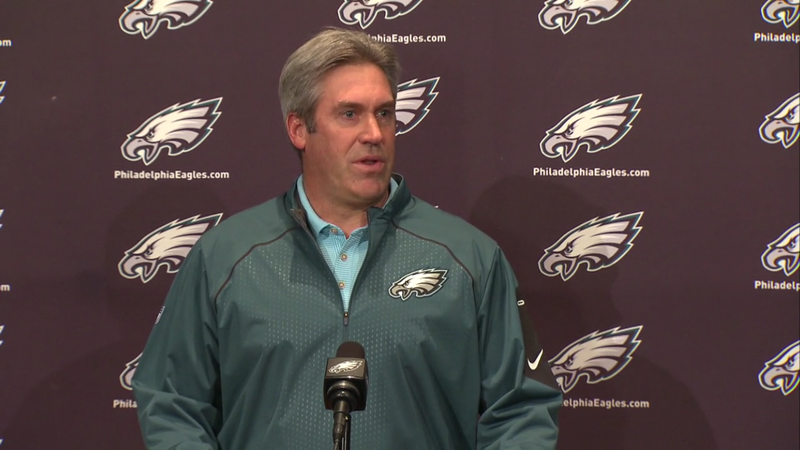 When the Eagles signed Sam Bradford back on March 1, it was supposed to be the definitive vote of confidence moving forward. Bradford was the Eagles quarterback. With a new two-year deal in place, worth $36 million and $26 million guaranteed, it was done.

Until Wednesday when, despite the Bradford deal, the Eagles made a push and signed former Chiefs backup quarterback Chase Daniel to a three-year, $21 million deal. That set the rumors swirling again: was Bradford really the Eagles choice or was there hidden meaning in the signing of Daniel?

Doug Pederson opened his media availability on Thursday with the answer.

"Sam Bradford is the No. 1. Chase Daniel is the No. 2," Pederson said. "We're working on the No. 3. We've really given ourselves a great opportunity at this position."

Is there any chance Bradford could still be traded, as rumors suggested?

"Sam's our No.1. We're not entertaining any offers."

So why make the deal with Daniel and why at the cost? The cost may have come down to securing the quarterback that Pederson wanted to add for the security of the position. Any quarterback in the league is at risk of getting injured. Add in Bradford's injury history and you better have a solid second-string quarterback waiting. That was the mindset the Eagles took as they worked on adding Daniel.

"I feel it's important to have two quality quarterbacks," Pederson said. "With the nature of the game and the style of defenses we see day in and day out, I don't ever want to put myself in a position where you don't have two solid quarterbacks. It was very important to me to get Sam signed and then find a No.2. Chase was that guy."

Pederson also established that the announcement of Bradford as the No. 1 and Daniel as the No. 2 comes now to define the situation now, so that the focus can shift to working on the offensive schemes and preparing for the season.

"I felt like that was the best going forward by saying that. It eliminates any distraction going forward and now we get to go out and play ball," Pederson said. "It's clearly defined right now.

"Nobody makes the roster in April. We're going to continue to improve our roster. The quarterback position is not exempt from [competition]. You have to create opportunities or your guys to compete with one another and you're going to put the best 11 on the field."

It seems that the signing of Daniel will end Mark Sanchez' time with the Eagles. For now, Sanchez still has a roster place. But with the Eagles establishing the top two spots at the position, it's hard to imagine Sanchez being happy with anything less than a backup role.

"He's still on the roster," Pederson said. "He could be the No. 3 but right now we're evaluating that position."

Of course, the Eagles addressed far more than the quarterback position on Day 1 of free agency. Along with Daniel, who was introduced to the media, the Eagles also introduced cornerback Ron Brooks and safety Rodney McLeod.

"We signed our current guys and then we went out and found guys that can be solid starters and/or backups on this roster," Pederson said. "I'm excited about that and looking forward to the opportunity to work with these guys."