Eagles Flyers Phillies Sixers About Us Write For Us
Flyers-Panthers: Postgame Perspective
This Week in Flyers History: Week ending March 13 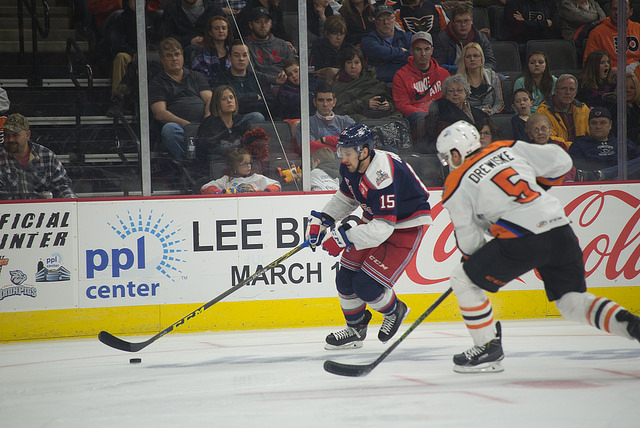 The day started with some minor roster shuffling for the Lehigh Valley Phantoms. Anthony Stolarz was needed as the Flyers emergency backup, leaving Jason LaBarbera to start in goal for the first time since Feb. 12.

The Phantoms provided some early offense, but couldn't sustain it as a 2-0 lead turned into a 4-2 loss to the Hartford Wolf Pack on Saturday afternoon from XL Center.

The Phantoms would open the scoring at 9:48 of the first as Chris Conner finished on a nice backhand move on a breakaway. It was Conner's 13th goal of the season and assists went to Tim Brent and Taylor Leier.

Captain Colin McDonald would pad the Phantoms lead with just over three minutes remaining in the first. Cole Bardreau picked up a loose puck in the neutral zone off a turnover and after carrying in and drawing the defenseman, threaded a perfect pass to the slot for McDonald, who finished on his 12th goal of the season.

Through 20 minutes, the Phantoms had a two-goal lead despite a 14-10 disadvantage in shots.

Hartford would rally back in the second. It started with Tyler Brown's goal at 10:05. A long lead pass from Brady Skjei connected with Brown and he roared in and scored his second goal of the season to cut the Phantoms lead to one.

With just over two minutes remaining in the second, Jayson Megna struck for a power-play goal, collecting the rebound on a Mat Bodie shot, to tie the game. Hartford had a 33-18 lead in shots through two.

Hartford kept the pressure coming in the third and struck at the six-minute mark for the go-ahead goal. A point shot by Chris Summers was deflected in front by Marek Hrivik for his eighth goal of the season.

Bodie put the icing on the cake with a shorthanded goal at 10:14, his sixth of the season.

The Wolf Pack finished with 47 shots on LaBarbera, with the Phantoms netminder making an impressive 43 saves. Hartford goalie Jeff Malcolm made 28 saves in the win.

The Phantoms return to the ice on Wednesday when they travel to Rochester to take on the Americans. The opening faceoff is set for 7:05 p.m.