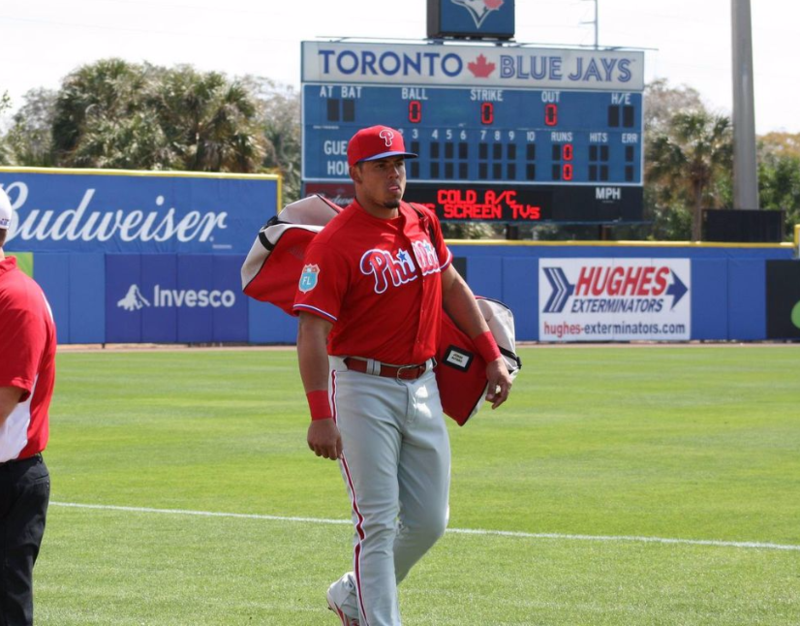 The Philadelphia Phillies announced that they optioned catching prospects Jorge Alfaro and Andrew Knapp this morning, with Knapp heading to minor league camp and Alfaro specifically being optioned to Double-A Reading.

On the same day that Alfaro was optioned, manager Pete Mackanin paid him a tremendous compliment.

Pete Mackanin on Jorge Alfaro, who was optioned to the minors today: "He's got the best arm I've seen -- maybe ever."

Most scouting reports on Alfaro rave about his both his power potential and his arm. His arm was on display numerous times in his brief stint with the major league club this spring, though there were a couple of occasions where he still seemed to be figuring out how to use his strong arm, specifically when throwing to third base. Still, it's evident that his throwing ability will be one of his strengths at the major league level.

What isn't necessarily evident is how Alfaro will pan out as a catcher overall. The same scouting reports that praise his arm strength aren't as high on the rest of his skills behind the plate. In theory, Alfaro could move to first-base if he doesn't pan out behind the plate, though his power wouldn't be as above-average for that position and it would render his strong arm all-but useless. Alfaro could also move to the outfield, potentially.

Either way, Mackanin's quote is interesting. Jake Thompson and Nick Williams are considered the two top prospects that the Phillies acquired from the Texas Rangers in the Cole Hamels trade last summer, but Alfaro is the wild-card. He's got tremendous upside both at the plate and with his arm, and if he can become even average in the rest of the aspects of catching, he has a chance to be a long-term cog for the Phillies, and make them the clear winners of that trade.