Rock Bottom: Only way is up for Phantoms following blowout loss 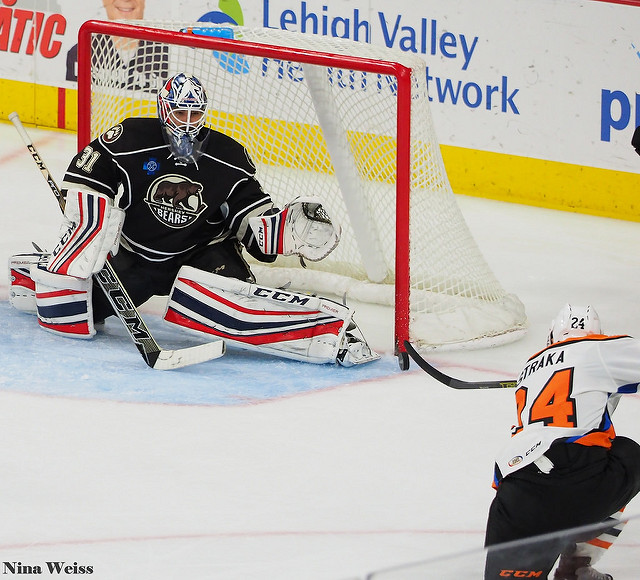 The Lehigh Valley Phantoms suffered their worst home loss in franchise history on Wednesday night at PPL Center in an 8-0 shutout loss at the hands of the rival Hershey Bears.

Chris Bourque — two goals, one assist — and Nathan Walker — one goal, two assists — led the way with three points each for the Bears. Dan Ellis recorded his 23rd win and fourth shutout of the season with a 21-save performance.

Lehigh Valley had several quality chances in the first period, but were unable to make any of them count. Chris Conner, on more than one occasion, snuck behind the Bears defense and used his speed to create scoring chances. Taylor Leier made some plays in the opening period as well, but to no avail.

Hershey took a 3-0 lead into the middle frame and while the Phantoms did their best to keep the Bears at bay, things unraveled late in the period to the tune of four goals against in a span of 4:48 of play — including two goals 19 seconds apart.

With the Phantoms all but mathematically eliminated from postseason contention, keeping their collective composure and attempting to get out of the rut they are in these final three and a half weeks of the season will be intriguing to watch as their season winds down. There are several players on the roster who are looking to leave a lasting impression before heading into the off-season.

Head coach Scott Gordon: "Obviously the chances were generated [in the first period], but the amount of time we spent in the defensive zone – a lot of it stemmed from turnovers in our zone. To their credit they do a good job of being hard to check in defensive zone. They move & support well and [that led to] a lot of missed coverage."

Colin McDonald: "Nothing really went right. It kind of snowballed. You try to get yourself out of it and seems like you can't do anything right. There's really no other way to get out of this. You just have to forget about it & work that much harder. If you think you're working hard, you have to raise it another level."

With Anthony Stolarz recalled by Philadelphia and Jason LaBarbera injured, the Phantoms will roll on with a duo in net from their ECHL affiliate in Reading — Martin Ouellette and Connor Knapp.