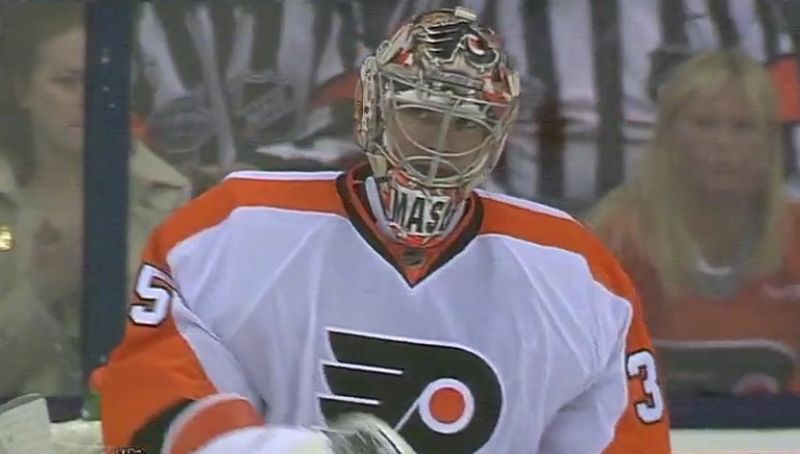 Hours later, the memory of what happened on Tuesday night in Columbus remains a bitter end to a night where the Flyers almost escaped with two points.

With a two-goal lead and under 90 seconds to play, it was the Flyers to lose. Somehow, they found a way, the sixth time this season the Flyers have surrendered the tying or game-winning goal in the final minute of regulation.

There was one Flyer that didn't lose that game. Steve Mason was working on back-to-back wins and he deserved as much.

Even if the Flyers as a whole got the fate they deserved on Tuesday night, Mason proved that he is more than ready for the task ahead. With Michal Neuvirth out for the rest of the regular season, Mason has to shoulder the workload. Facing the first of four remaining back-to-backs, Mason carried his team to one win, then shouldered about as much as any goaltender could before it all came crashing down.

It was certainly impressive enough to vanquish any doubts that may be left in the netminder. As good as Neuvirth was this season, this is Mason's team to carry, and he showed he can handle the workload coming.

Mason was on track for two of his more impressive wins this season. After stopping 23 of 24 shots in Brooklyn on Monday night, he made 41 saves on 41 shots in the first 18:56, one night later. The 42nd shot found its way in.

After somehow managing to track two more tip-in attempts in the closing seconds, Cam Atkinson lifted the third, the 45th shot of the game for Columbus, over Mason. Game tied, just 8.9 seconds away from victory.

Mason then made eight more saves in overtime and another three in the shootout. If you're keeping score at home, that's 77 saves on 81 shots, a save percentage of .951.

But that's the result you can get when you rest on your goaltender's performance, even when ahead by two goals in the final 1:04. Take no lead for granted, hopefully that's what the rest of the Flyers got out of that.

You could sense the dejection for Mason and the urgency of what happens when you don't bail out a goalie in Claude Giroux's voice after the game.

"It's frustrating. It wasn't our best game, but we were able to get a couple of goals," Giroux said, before taking a pause. "That was Mase's game."

Ryan White, who put the Flyers ahead by two with 8:32 to play, acknowledged Mason's play similarly, as the only reason the Flyers were even in position for two points.

"I hate to say it, but they deserved it," White said. "They outplayed us most of the night. I think what's most disappointing is Mase. Hell of a game tonight and gave ourselves a chance to win and it's a tough loss for sure, but no, I don't think we deserved better than what we got, I'll tell you that."

So Mason's career-high 51 saves and the effort that went with it go to waste. But that shouldn't change what it means for Mason.

For the entire game, even in the dreaded shootout, you saw a confident goaltender ready for anything. He's really been on that roll since his first start back from injury on March 5.

That game was a 19-save shutout. He's started eight of nine games for the Flyers since then, going 5-1-2 in that time. He's finished a game with a save percentage below .900 just twice. He's faced 29 shots or more in four of the last five games.

The Flyers certainly trust in their goaltender, maybe a little too much. They leaned on him on back-to-back nights and almost survived. That's the harsh lesson they take away from that.

"We gotta learn from this, and when you have a 2-0 lead you have to find a way to hold that lead," Giroux said. "At the end of the day, we gotta worry about ourselves and if we play like that, even if we make the playoffs, we'll be out soon. We need to find a way to play better because it's not good enough."

But Mason, as his has been over this still hot stretch for the Flyers, has been more than good enough. On Tuesday, he was the only reason the Flyers even got a point at all.

It was the points that only mildly salvaged the night, still a night lost, but not at first glance in the standings. The Flyers currently hold a playoff spot. They owe their starting goaltender for that.