Will another prospect like Gostisbehere emerge from NCAA Tournament for Flyers? 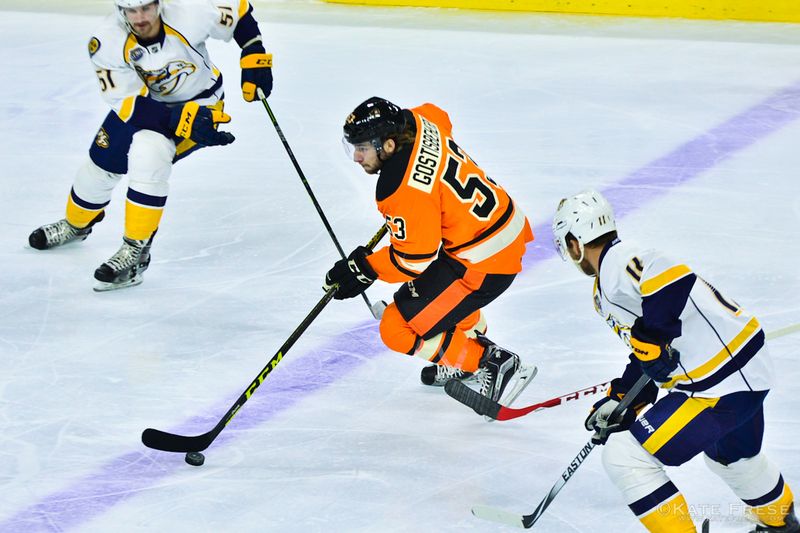 One of the finer recent moments for Philadelphia Flyers fans came when current rookie sensation Shayne Gostisbehere absolutely dominated the Minnesota Golden Gophers in the 2014 National Championship game. Gostisbehere’s performance, which happened to take place at the Wells Fargo Center, gave everyone an indication of what was coming in the future.

With the NCAA Tournament starting today, Flyers fans may be wondering if they have another collegiate prospect ready to emerge like Gostisbehere two years ago.

The organization has a few collegiate prospects floating around especially defensemen like the University of Connecticut’s David Drake, Clarkson University’s Terrance Amorosa, Bowling Green State University’s Mark Friedman and the recently signed Reece Willcox of Cornell University. However, not one of those player’s schools made the final bracket.

Meanwhile, goaltending prospect Matej Tomek’s team, the University of North Dakota Fighting Hawks, made the tourney but don’t expect the Flyers’ youngster to get any time over starting goalie Cam Johnson.

However, there are two prospects to watch out for today and both are having quietly solid seasons for their universities.

At 5:30 p.m. the Michigan University Wolverines will face off against the University of Notre Dame Fighting Irish on ESPNU. The Wolverines have quite a few prospects on their roster from the nation’s leading scorer Kyle Connor, who belongs to the Winnipeg Jets, to Tyler Motte and J.T. Compher, who are a part of the Chicago Blackhawks and Colorado Avalanche respectively.

But Flyers fans will want to pay attention to Cooper Marody, the freshman third line center for the Wolverines and 158th overall pick by Philadelphia in the 2015 draft.

Marody had a tremendous start to the 2015-16 campaign. He scored seven goals and produced 12 points in Michigan’s first 10 games. But as the season wore on, he missed a month with mononucleosis. Since returning from the illness he’s scored twice and added eight helpers in nine games.

The Fighting Irish will look to focus most of their defensive efforts on the likes of Connor, Motte and Compher. This may give Marody more room to regain his early season scoring touch and something for the Philly faithful to watch.

Later on Friday night at 8, the Boston College Eagles with take on the Harvard University Crimson on ESPNU. Harvard’s starting goaltender, Merrick Madsen, is one of the Flyers more promising goaltending prospects. Hockey’s Future says he "has the physical attributes and competitive nature to be a successful goalie." He has proven that in his first season as the starter for the Crimson. He boasts the 12th best goals against average and one of the top save percentages in the nation.

But he didn’t fare particularly well in the ECAC championship against the fifth best offense in the country, the Quinnipiac University Bobcats. This opening round matchup will see Madsen tested by the fourth best offense so it’ll only get more difficult from here on out for the sophomore.

Depending on the outcomes, fans may be able to see more of Madsen and Marody on Saturday in their respective regional finals. However, for the curious fan, there are plenty of undrafted or uncommitted players to scout in the other games.

The top-ranked team in the nation, Quinnipiac, typically recruits undrafted players in the hopes of better team building. Therefore, there’s a good deal of talent on their roster to examine in their Saturday afternoon contest against Rochester Institute of Technology on ESPNU.

Forward Sam Anas is nursing an injury suffered in the ECAC title game against Harvard. If he can suit up, fans can check out one of the top scorers in the nation. He’s tied for seventh in goals (23) and ninth in points (48) in 39 games. 10 of those tallies have come on the power play. He’s on the small side (listed as 5’8"), but the Flyers could use some more scoring depth at forward within the organization.

If the team also wants to bolster their goaltending corps, they’ll want to take a good hard look at the Bobcats’ Michael Garteig.

Garteig is possibly the best goaltender to walk through the Hamden, Ct. school. Even though the Flyers have Madsen working on his game just an hour and a half east of the Quinnipiac netminder, Garteig is a senior and will able to fill in at the professional level immediately. Something the Flyers sorely need right now with Michal Neuvirth and Phantoms goalie Jason LaBarbera both injured.

If you have defensive prospects on the brain then consider scouting out Ethan Prow, the senior defenseman for St. Cloud State University. The Sauk Rapids, Mn. native is the only defenseman to make the Top 10 for the Hobey Baker award. He leads all blueliners in the nation with 37 points including six of his eight goals coming on the power play. Prow’s Huskies take on the Ferris State Bulldogs on Saturday at 3 p.m. on ESPNews.

So while you wait for the Flyers and Arizona Coyotes to get going on their late Saturday night affair, consider scouting out this year’s NCAA tournament. While a Shayne Gostisbehere may not emerge from this year's pack, it’s a golden opportunity to see how the team’s kids are doing and who else might be a good fit for the franchise.