The Phillies Open 2016 in a Much Better Place 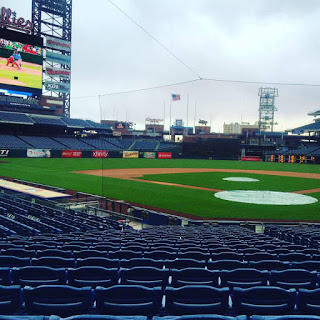 The Phillies are a better baseball team than they were a year ago, or even when they left town last October. No one should mistake them for their 2011 version, or even their 2005 version, but this team is in a considerably better place. Gone are all of the heroes of 2008 except for Ryan Howard and Carlos Ruiz, both of whom will be gone a year from now. The Manager, General Manager, and Team President are different than a year ago, and seem to represent a more analytical, proactive approach to rebuilding this team. This team is younger, seems to have more depth, and is carrying less dead weight.

A year ago, the Phillies rotation had Aaron Harang, David Buchanan, Jerome Williams, and Sean O'Sullivan in it. While Jeremy Hellickson is not an upgrade on Cole Hamels, Aaron Nola, Charlie Morton, Jerad Eickhoff, and Vince Velasquez seem like four solid upgrades on last year's Opening Day rotation. Maikel Franco is likely to get almost all of the reps at third base this year, which should represent a substantial upgrade. Ryan Howard is now in a platoon with Darin Ruf, one that should substantially help both players' stats. Chase Utley got off to a really rough start last season due to health, and Cesar Hernandez should start this season in a substantially better place. Less at-bats should be wasted on aging and declining players this season. As is typically the case in rebuilds, year two will be much more efficient in getting potential pieces of the future a good look. Couple that with a start where they will see both Cincinnati and San Diego early, two NL teams they are at least on par with, and the Phillies could get out to a nice start that gives you hope.

Temper that hope now, obviously. The Phillies would have to catch a lot of breaks to even be an 81-81 team at the end of this season. The major injury to Aaron Altherr made an already thin outfield into a potentially major liability in 2016, taking a rather exciting young player away and putting a question mark into place on a team that already has a really uninspiring overall offense. The Phillies opened last season with Papelbon, Giles, and even Diekman in place in their bullpen, and the first two had dominant seasons for the Phillies for the majority of the season. This year, the Phillies open the season with no closer, and no defined set-up man really. Given the fragile and narrow pathway for success for this team, the fact that they aren't likely to be good at holding one run leads means that the Phillies will find contending to be close to impossible. While their starting pitching staff is much better than last year's, and their line-up has some potential for improvement, their overall improvement in the standings is likely to be hampered by a bullpen that has serious holes, a line-up that is not balanced end-to-end, and team defense and fundamentals that will sometimes lack. While I expect the Phillies to be better, I still see a 67 to 72 win team that finishes with a top ten pick in the 2017 draft.

None of this is to say that 2016 will be a lost season. The continued development on the Major League level of Maikel Franco, Odubel Herrera, and even Cesar Hernandez and Freddy Galvis should be fascinating to watch. The continual development of pitchers Aaron Nola, Jerad Eickhoff, and Vince Velasquez should also be worth the watchful eye of Phillies fans everywhere. Expectations should be tempered though. If you expect Franco to be Mike Schmidt, Herrera to be Lenny Dykstra, or Hernandez to Chase Utley in 2016, you are not giving them room to grow and make mistakes. It is possible, if not probable that Nola and Eickhoff will see some regression from 2015 in 2016, as the league adapts to them after their first look. We don't know what Velasquez is yet, a top end starter, a back end starter, or even a reliever. Finally, do not sit here in April and think that the names Crawford, Quinn, Williams, Knapp, Alfaro, or any other prospect will be here in a few weeks to save the day for the 2016 team- those guys are all likely to be a little while yet. The goal is to get all of the young talents on the MLB team through a full, healthy, productive season, where we see improvement towards these players being pieces on a contending team.

On the days when it's too much to bare another game of a sub-.500 team on CSN, take a ride to Allentown, Reading, Lakewood, or Williamsport, and behold the talents of the top-ten system the Phillies have built over the course of the trades of the last year. Go watch Crawford, Quinn, Cozens, Brown, and Alfaro in Reading, or come watch Williams, Knapp, Stassi, and Joseph slug the ball in the Lehigh Valley. The development of Appel, Thompson, and Eflin in Lehigh Valley could be pivotal to how fast this Major League club contends again, and it will go on less than 90 minutes from Philadelphia. Names like Pinto and Kilome could end up as major discussion topics within this organization by the end of this Summer, as could the debate over which prospects emerge as the starting catcher and first baseman of the future by the end of the year. Unlike a year ago at this time, the Phillies no longer have a bottom feeding minor league system, but now are amongst baseball's leaders in top-100 prospects and potential premium talents. As I said, on the days that the big league club is too awful for your eyes, we now have a system worth watching and dreaming about.

Today is about the big league club though, and I will say something I would not have said a year ago- go ahead and dream. If we're talking about Dalier Hinojosa's 35th save in mid-September, or Maikel Franco's 35th homer, or Odubel Herrera's batting title chances, or whether or not Nola, Eickhoff, or Velasquez can post a sub-3.00 season ERA, my comment about 81 wins being a pipe dream could end up looking way off. Generally, things do not break that perfectly for a baseball team, and the 2016 Phillies should not be the exception. I am old enough to fondly remember how every positive prediction turned out right about the 1993 Phillies, and what it felt like as a ten year old to sit there on an October night and take in my first World Series game. It's not probable. It's possible in our wildest dreams though this year, and that's worth hoping for on Opening Day.

This is becoming a bit old for Philadelphia sports fans, but I'm starting out the 2016 season trusting the process that Andy MacPhail, Matt Klentak, and Pete Mackanin have put into place. I can see the direction, and I feel like some of the ground towards improvement has already been made up. We're going to see better starting pitching, several young stars develop in the majors, a better minor league system, and hopefully several in-season promotions. We are moving in the right direction with our Phillies. This Phillies team should be much more fun to follow than their 2015 version was.