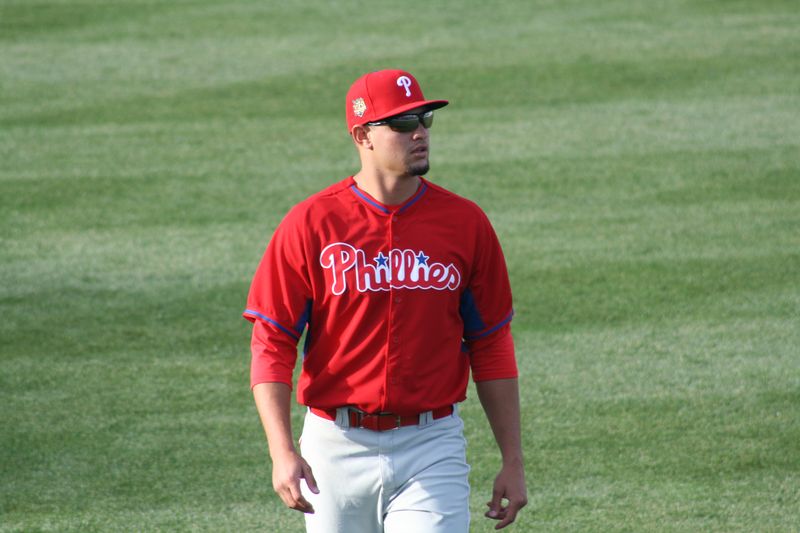 Do you see Dylan Cozens making a move up to the bigs? He is putting up solid numbers.
~Bryan

One name that has caught the attention of fans at AA Reading is Dylan Cozens, right fielder.   It is not much of a stretch to say that so far in 2016, Cozens has been the Eastern League offensive MVP, belting a league-leading 14 home runs and driving in 42 runs in 49 games with the Fightin' Phils. Cozens is ranked the Phillies' 22nd best prospect on MLB Pipeline, a testament to the depth of prospects that the Phillies have.   However, Cozens is not likely an immediate option.

Cozens turns 22 years old tomorrow.  While that is not an unprecedented age, the Phillies probably will let Cozens work his way up the Phillies system before giving him a promotion to the Major Leagues.  Cozens spent most of 2015 with the Clearwater Threshers and then concluded the year in AA Reading with 11 games.  Cozens has been in the Phillies system since they drafted him out of high school in 2012.

A promotion to AAA Lehigh Valley would be more likely than a call-up to the Major Leagues.  I think that Cozens will have to show he can hit AAA pitching first.  The competition in AAA includes a lot of former Major League pitchers who tend to bounce back and forth between the Majors and AAA.  If he can hit that type of pitching, maybe the Phillies would consider calling him up.

The MLB Draft begins June 9, and after that, we may see some movement in the system.   Some players that are currently down in Clearwater with the Gulf Coast League will go to Williamsport, and maybe a few go to Lakewood, creating a domino effect that pushes some to Clearwater and then some to Reading and Lehigh Valley.

Darin Ruf has multi-hit games in the last three of four games for Lehigh Valley.  When will he get a chance again?
~Brandon

Unfortunately for Darin Ruf, he has had many chances before and that may keep the Phillies from considering if all things go according to plan.  The plan for Ruf to get the most at bats was at first base, but now Tommy Joseph will be getting any opportunities against left-handed pitching (as well as opportunities against right-handed pitching as well).  There are only a few scenarios I see that it would take to get Darin Ruf back to the Major Leagues.

Ruf is beginning to show some power once again at AAA Lehigh Valley.   In 13 games, Ruf has five home runs and 13 runs batted in.  However, the whole picture is a .255 batting average.  After going seven for his last 16 at bats, Ruf increased his average from .171 to his current .255.  Ruf probably will have to sustain those numbers longer to show that he is worth a call-up.

With the Phillies welcoming back Cody Asche perhaps as soon as this current home stand, there is no obvious subtraction on the Phillies roster to necessitate a Ruf promotion.   The Phillies seem poised to keep Ryan Howard on the roster for the duration of the season (sans another team taking him off of their hands, which is unlikely) and the obvious offensive subtraction, Emmanuel Burriss, likely will give way to Asche for a roster spot.

The only way Ruf comes back with Joseph in the fold is in the outfield.  While David Lough and Peter Bourjos are not hitting the cover off of the ball, I think that they are not so terrible that Ruf would get another shot at their expense.  Both Lough and Bourjos are out of minor league options.

Perhaps Bourjos would make sense to be traded to the Tampa Bay Rays to help fill in for the injured Kevin Kiermaier while That Ball's Outta Here suggests a trade to the Orioles.  Bourjos is a useful defensive piece for somebody in center field and could go.

If someone gets hurt in the outfield, the Phillies may have little choice but to call up Ruf, already on the 40-man roster.

But, Ruf had his shot and is likely buried for now.

Who will be the player on this team that gets traded first?
~Robert

A week ago many Phillies fans were clamoring for trades to improve the Phillies team.  But, after a sweep by the Chicago Cubs and losing two of three to the Detroit Tigers, fans have been reminded that 2016 for the Phillies is a rebuilding year.  And with that in mind, the Phillies have the opportunity to make their already deep system of prospects even deeper with some moves during the season.   The Phillies have a few veteran pieces that could help some contending teams.  Here are a few.

Jeanmar Gomez.  Gomez is a steady arm in the bullpen.  While he is not a lock-down, 100-mile-per-hour closer, Gomez rarely blows up with multi-run outings in the games that he gives up runs.  While a contending team might not want Gomez as their closer, the Phillies using him as a closer really increases his value.  Plus, the acquiring team will have Gomez under control for 2017, too.  As we saw last season, bullpens cost some teams their playoff spot and they placed high values on closers this offseason as we saw with trades of Ken Giles and Craig Kimbrel.

Andres Blanco.  It is hard to believe that Blanco has been with the Phillies organization since 2012.  Besides showing veteran leadership to the Phillies' Latin players, the Venezuelan utility man can play shortstop, third base, second base and even some first base.   The Phillies might find what he brings as a mentor more valuable than what they could get in return, though.

Andrew Bailey.  Bailey could be traded by the Phillies at the deadline as well to a team looking for a veteran arm.  Since joining the Phillies, Bailey is 2-0 with a 2.77 earned run average.  Bailey has been a tremendous set-up man for the Phillies, which could make him attractive to other teams.   The Phillies may be inclined to give Bailey the closer's role if Gomez is graded, as injury concerns may not entice teams to give the Phillies much for Bailey.

Peter Bourjos.  Bourjos has value for his defense, which might help a team with a suspect outfield defense.  Like the Phillies replaced Pat Burrell in left field almost daily during their championship run, Bourjos could have value to a team in that manner.  The return will be very little, but if Cody Asche returns to health and Aaron Altherr's return seems promising, the Phillies can easily spare Bourjos.

To answer the question as to who would be "first" is a difficult proposition.  The Phillies have just over two months until the trade deadline (which this year is Monday, August 1).  By then, teams will have a clearer idea about what they need and the Phillies will likely do what they can to maximize value.  When time is running out when the deadline approaches, the Phillies will make the trades that make the most sense as the trade offers come in.  So, any of the above may be the first ones moving on.