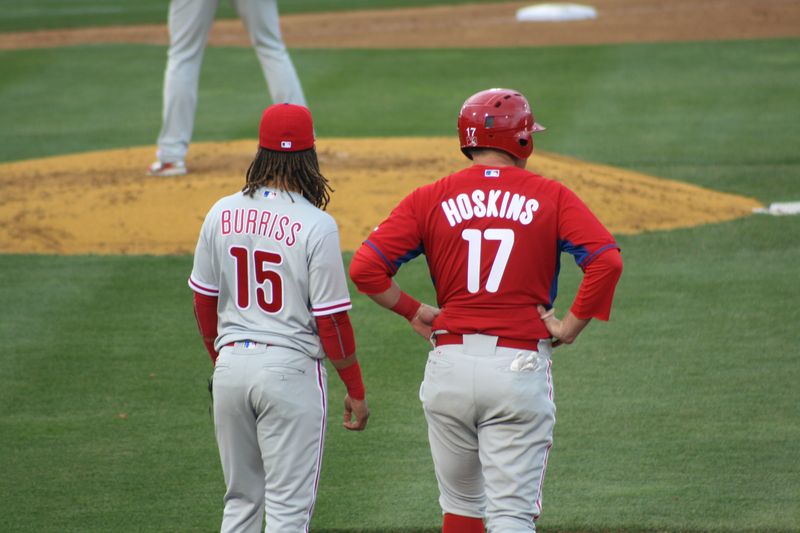 It's time once again for the weekly Phillies mailbag.  We answer your questions and talk about them Tuesday afternoon on The Sports Bash With Mike Gill on 97.3 ESPN Atlantic City.  You can listen online at 973espn.com.

The Phillies have been amazing the last few weeks.  Can the Phillies sustain this hot start?
~Michael

Indeed, the Phillies have been one of baseball's biggest surprises.  In fact, ESPN released their most recent power rankings and the Phillies moved from 25 to 16.  But whether or not this streak is sustainable is the big question.  Some of the numbers suggest that it is not.

In the early going, the Phillies have been outscored by opponents 98-82, a differential of -16.  Couple that with a small sample size of just 25 games, and we might have to wait to see the greater picture after more games.  Sports Illustrated used the Pythagorean winning percentage tool to show how they compared with some of the bottom teams in baseball:

Given their subpar run differential, the Phillies are an MLB-high 4.4 wins above their .422 Pythagorean winning percentage (their projected record based upon runs scored and runs allowed). That .422 mark outranks only the Padres (.378), Brewers (.349), Reds and Braves (both at .300)—three of the NL's four other teams who are in one phase of a rebuilding program or another (San Diego is in more of a post-roster shakeup hangover), with the Rockies (12–12 with a .478 Pythagorean winning percentage) the other such team off to a better-than-expected start.

However, the biggest losses the Phillies have had included one 11-1 loss to the Mets, accounting for 10 of the 16 runs, and back-to-back games against the Nationals in which the Phillies lost 9-1 and 8-1.   In those three games, Vince Velasquez, Aaron Nola, and Jeremy Hellickson had uncharacteristically rough games.   Those three games alone account for the run differential and then some.

While I would not put the Phillies as bad as the Pythagorean winning percentage or overreact to think that they are going to sustain a .600 winning percentage all season, I think it's fair to say the Phillies are not going to be as bad as some made them out to be in the beginning of the season.   The Phillies probably will still trade assets that are not part of the long-term solution in July, while young players will continue to develop.  That development will include some rough patches.

Could the Phillies acquire a bat at the trade deadline if they are still winning?
~Matt

While it might be tempting to acquire veteran assets to help the team move along, I think the Phillies will keep the rebuilding course and be more likely to sell than buy.  That does not necessarily mean that the team is conceding if they make some moves.   The Phillies could trade some of their veteran pieces as others are coming up from the minor leagues.

I think back to the Oakland Athletics team in 1999 when the Athletics traded pitcher Kenny Rogers despite having a winning season.  They finished seven games out of the Wild Card, but under today's system would have been the second Wild Card recipient.  The A's continued along their rebuilding path and by 2001 had a 102-win season with their new core that included Miguel Tejada and the pitching trio of Mark Mulder, Tim Hudson, and Barry Zito firmly in place.

If the Phillies trade the likes of Jeremy Hellickson or Jeanmar Gomez for even more prospects in return, the team can replace Hellickson on the Major League roster with Mark Appel, Jake Thompson, or Zach Eflin and Gomez in the closer role with Hector Neris or another young arm.  Even making those swaps, the Phillies could still be competitive.

But, trading some of their big prospects might not be helpful to the bigger picture.  If the Phillies want to trade for a veteran outfielder that does not cost them anything other than eating salary, they might consider that.  It may just make more sense to use what they already have.

How big a prospect is Rhys Hoskins? Is he the first baseman of the future?
~Len

As of when I am writing this Monday evening, Reading Fightin' Phils first baseman Rhys Hoskins has now hit in 19 straight games.  It is enough that he is drawing plenty of attention.   In the MLB Phillies Pipeline, Hoskins is rated the Phillies' 20th-best prospect.  Thus, Hoskins has not been on many fans' radar up until now.

Hoskins' batting average appears to be rather low at .256, but Hoskins started the season 1 for 17.  Since then, he is batting .308 and showing no signs of slowing down.  Hoskins has hit five home runs and has collected 17 runs batted in 21 games played.

Hoskins probably will get a long look at first base in Reading for the whole season and we will see where he goes from there.  It is premature to call Hoskins the first baseman of the future, but the Phillies have no obvious candidate for the position as of right now.

Brock Stassi was Eastern League MVP in 2015, but due to his age often is not included among prospects.  Tommy Joseph may get a look as well, as Ryan Howard's time in the organization comes to an end this season.  The Phillies may end up with Andrew Knapp or Jorge Alfaro at first base if both work out.

For once, the Phillies have plenty of depth in their minor league system.  The Phillies will wait and let the best rise to the top, and hopefully the Phillies will have to make some tough decisions down the line because too many of them are deemed Major League players.