The Phillies Future is Really Not Too Far Away 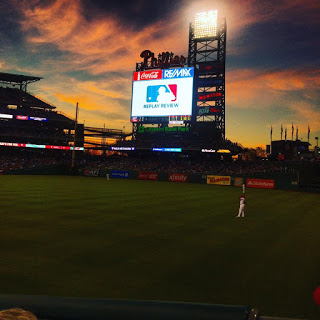 The 2008 parade down Broad Street might not feel so long ago, but if you go to Citizens Bank Park for a game right now, the only reminders of that team you may see on the field are Chooch and Ryan Howard. Around them is an assembled cast of characters that were supposed to be really terrible, but have managed to stay over .500 much further into the season than any of us expect. Even so, only Maikel Franco and Odubel Herrera are virtual locks for the future, and the Phillies line-up is carrying around several complete eye-sores. As you watch Howard, Peter Bourjos, and a few others take up plate appearances, you can't help but ask yourself how much of the current product has a future in Philadelphia.

With that in mind, I invite you to take a ride up the Northeast Extension to Allentown and take in a ball game. If you haven't seen a full line-up there, take a ride down 222 to "Baseballtown" and Reading should be able to fill in the holes. The Phillies upper-minor league affiliates are stock full of the line-up and rotations of the future, and many of them are just a few months away from arrival.

First Base
There is a very real chance that Ryan Howard's true heir apparent is already in uniform with him, thanks to the promotion of Tommy Joseph. While it is too early to tell if the former top prospect is ready to stick, he has held his own in Philadelphia so far, after tearing up the AAA ranks. If that's the case, then there's no need to read on. Just in case though, it is worth noting that the Phillies have other advanced options to watch.

Brock Stassi has struggled offensively in AAA this year, but last year's breakout in Reading is still fresh on many minds. He still has some time to turn it around and get back into the picture. More likely than Stassi though is Rhys Hoskins, currently the starter in Reading, who is starting to heat up this past week. Hoskins has had good power in the lower minors, and could hit his way into the picture. Beyond these options, either Jorge Alfaro or Andrew Knapp could end up moving here.

Second Base
The most likely outcome here is that the short-term future second baseman is already on the big league roster. Obviously Cesar Hernandez played well enough last year to see Chase Utley out of town, but he has yet to clinch up this job long-term. His double-play partner, Freddy Galvis may end up as an option here, and does have a better glove. The problem for Freddy though is that his bat has become a real negative this year, probably giving Cesar the edge to keep this spot. The real threat to Cesar comes from Odubel Herrera, who could be moved back to his natural position if a top prospect outfielder performs up to par. Herrera is probably the solution of the next couple years, unless the Phillies choose to go out and find help at this position on the market.

In the system, this position is a little lighter. Angelo Mora and Jesmuel Valentin in Reading could be options, but that's unlikely. Scott Kingery in Clearwater is the next legitimate option to play his way to the bigs at this position in our system. Malquin Canelo could make the switch from shortstop in the future too, but the Clearwater player has hit an offensive snag at that level.

Shortstop
Sometime later this Summer, J.P. Crawford may arrive in Philadelphia. If I had to bet, it will be in September. His arrival last week in AAA simply put the clock on for when the prized prospect will be a Phillie.

Third Base
Despite some struggles offensively, Maikel Franco is firmly entrenched here. He is a building block of the future.

The Outfield
The only guys in the current outfield with much of a chance at a future are Odubel Herrera and Tyler Goeddel. Waiting nearby in the wings is Nick Williams, who is currently in AAA and holding his own. Dylan Cozens is another corner outfield option, mashing through the AA level this year with prodigious power. Roman Quinn appears to be heating up, and has the inside track on being a center fielder of the future type of player. Expect Williams up this season, perhaps even soon. Expect Quinn and Cozens to be considered in September.

Catcher
In my estimation, Jorge Alfaro is the favorite to win this spot, however Andrew Knapp certainly hasn't lost his road here yet. The best question to ask here really is if you want to have Alfaro's potentially big-time bat behind the plate. Either way, I think you will see one or both in the majors by next season.

The Rotation
Vince Velasquez, Aaron Nola, and Jerad Eickhoff have all showed more than enough in the majors to warrant a future. Zach Eflin, Jake Thompson, and Mark Appel are all throwing very well in AAA. Alec Asher has thrown well between AA and AAA, while Ben Lively has dominated in AA. Still others in the Reading rotation, like Ricardo Pinto, have a ton of promise for the future.

Next season, the Phillies could fill out a rotation of five rather easily with in-house options. They have more than enough options and talent to make it work.

The Bullpen
I expect the Phillies won't hold onto Jeanmar Gomez, which is sad, but closers have their best value when being traded from teams that aren't going to the playoffs. Hector Neris, Elvis Araujo, and others in this current bullpen could be a part of the future plans. This is the least important part though, as relievers can be found amongst minor league starters and the free agent market.

The Outlook-
I'm on the record before the season saying the Phillies will go 67-95. They have played a lot better than that, and probably should beat that- I'd re-peg them at 75 wins right now. I do not expect them to break .500 at the end of the season yet though, or make a run at the playoffs. Let's hope i'm wrong. Even if they do hit a snag this season and end up out of the chase, there's good reason for the Phillies front office to believe the 2017 team will closely resemble the future team they want to put on the field. In other words, there's reason for them to put a few dollars into the 2017 team to try and contend for the playoffs. While the Nationals and Mets are still good, the Phillies have played them well so far this season, and can certainly expect to hang in the future.