Eagles Flyers Phillies Sixers About Us Write For Us
Previous month:
May 2016
Next month:
July 2016

Phoenix, AZ — The game went ten innings and was almost four hours long. There were twelve relief pitchers used between both teams and a combined seventeen runs scored. Luckily, the Philadelphia Phillies (35-45) came out on the winning end of a grueling match-up versus the Arizona Diamondbacks (36-45). With today's win, the Phils completed a three game sweep of the D-backs. It also happens to be the first sweep of the D-backs in their home park since 2006.

The Phillies offense came to life during this series in Arizona. Over the course of the three games, they accumulated 44 hits and 21 runs. However, it was the complete opposite of when the Diamondbacks game to Philly a little over a week ago. During that four game series at home, the Phillies only had 20 hits and 5 runs. Maybe a change of scenery helped spark the Phils' struggling offense, maybe not. Whatever the case, the team needs to carry it back to Citizens Bank Park when the reigning World Series champion Kansas City Royals come to town this weekend.

With free agency rapidly approaching, the upstart Sixers have reported interest in several perimeter players, and another one can be added to the list.

According to an informed source, the Sixers are interested in unrestricted shooting guard Courtney Lee, who played for the Grizzlies and then the Hornets last season. Lee is not the team’s top target at shooting guard– that may be Portland’s Allan Crabbe – but more of a backup plan, according to the source.

Although Lee, 30, is substantially older (in NBA terms) than the young members of the Sixers nucleus, he checks boxes in three key areas that the organization is interested in: he’s a veteran with NBA Finals experience, he can space the floor with his shooting, and he is a proven perimeter defender.

Skillset-wise, Lee is exactly the type of player that the Sixers should target, but his age and desire for a final [large] payday may minimize the likelihood of him signing with the Sixers.

The Sixers desire to add perimeter talent through is evident. In a stark contrast from the past few summers, the Sixers are poised for an extremely busy free agency period.

Free agency doesn't officially open until noon on Friday, but at 4 p.m. on Wednesday, the powder keg exploded big time with three major moves, including a trade for the ages, dropping at almost the same time. 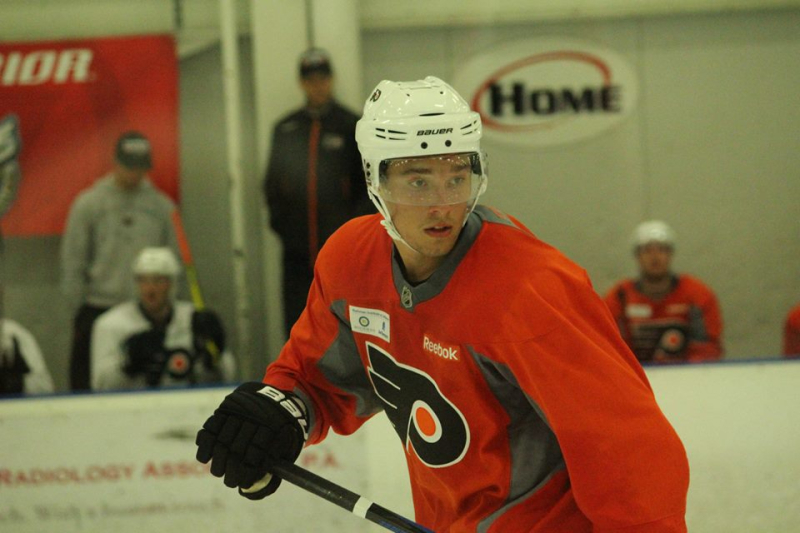 The first chance to see some of the Flyers newest draft picks will come in just a couple of weeks.

The Flyers announced their annual development schedule on Wednesday and the 34 participants.

PHILADELPHIA — After a shockingly strong start to the season, the last month or so has been rough for the Phillies. However, with a win last night against the Diamondbacks, the Phillies secured their first series victory since taking two of three against the Marlins from May 16-18. A win today would result in the first series sweep for Philadelphia since their series against Cleveland from April 29-May 1.

Mark Appel had surgery today to remove a bone spur from his right elbow. His season is over. Expected to be ready for spring training.

Gelb went into further detail in in article, saying that Appel was injured while attempting to begin throwing again while working his way back from the disabled list.

Appel, who was the No. 1 overall pick in the 2013 MLB Draft, was acquired by the Phillies from the Houston Astros in the Ken Giles trade. Appel was viewed as the second-best player that the Phillies acquired in that trade, behind Vince Velasquez.

In eight starts with the Triple A Lehigh Valley IronPigs this season, Appel was 3-3 with a 4.46 ERA. It would be interesting to know exactly when Appel started to feel discomfort in his elbow in 2016, considering he had an ERA of 1.64 after his first four starts. In parts of four seasons in the minor leagues, Appel has an ERA of 5.04.

It also will be interesting to see if Appel, who is 24, is invited to Major League Spring Training next season like he was in 2016 and whether he's given a serious chance to be in the starting rotation at some point in 2017. 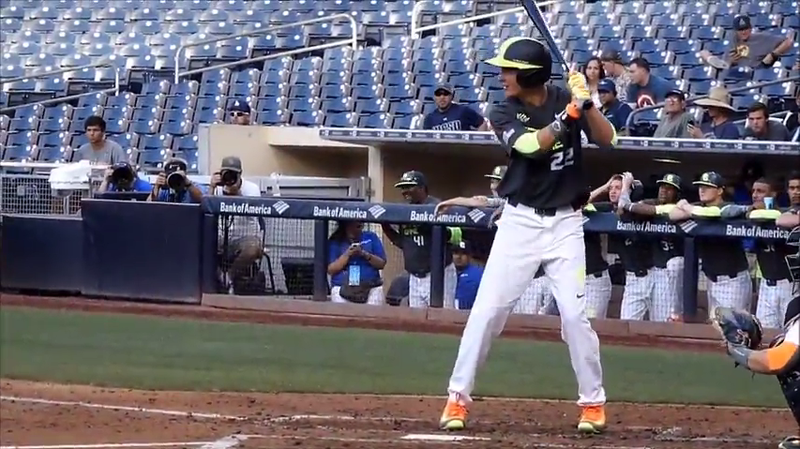 Philadelphia Phillies first round draft pick, Mickey Moniak, made his professional debut on Wednesday with the Gulf Coast League Phillies. In four at-bats, he hit an RBI-single, grounded out and had two strikeouts.

No. 1 pick Mickey Moniak made pro debut today with GCL Phillies. His first hit was an RBI single in the 7th. He's 1 for 4.

The Philadelphia 76ers will continue to look for shooting depth following the draft, whether it be via trade or free agency, but they have decided to also bring back a familiar face to the mix in Hollis Thompson. CSNPhilly.com reports that the Sixers have exercised Thompson's team option, which is worth a little over $1 million.

Thompson has played three seasons with the Sixers after going undrafted out of Georgetown in 2012. This past season, Thompson averaged 9.8 points and 3.5 rebounds per game. He shot 38 percent from three-point range.

Report: Dario Saric plans to work out deal, fulfill promise he made with Sixers

It's been three weeks since Bryan Colangelo and Brett Brown visited Dario Saric in Istanbul to determine his intentions for the 2016-17 season. No one really got an indication of whether or not Saric would commit to coming to Philadelphia or not, despite both parties agreeing it would be a good time to "make the jump".

"I think, at age 22, he's ready to make that jump. He's been playing professional basketball for a while, Coach Brown and I both expressed to him, and I think he understands that this would be a good time for him to come over for a lot of different reasons".

“I wasn’t pessimistic, I wasn’t optimistic," Colangelo said at the time. "I was somewhat neutral as to whether or not I felt he would be coming over and I still feel that way."[CSNphilly.com]

Comcast Sportsnet Philadelphia reports that a Croatian news site recently spoke to Saric and through translation by Twitter user @CroSports_,  Saric indicated that he plans to work on a deal with the Sixers after his current qualifying tournament.

Everything is leading in that direction. I'm waiting for this tournament (Olympic qualifying) to end so that I can sit down and work out a deal, then head over to the USA to sign.

"I have one more year with Efes (Turkish basketball team Anadolu Efes) and [head coach Velimir] Perasovic wants me to stay, but I gave [the Sixers] my word. My word means more than a paper.”

Saric has until July 17 to let Anadolu Efes know what his decision is. Later on Wednesday, ESPN's Marc Stein confirmed reports, saying that something could happen this month.

Dario Saric told reporters in Europe he's headed to the Sixers; one source says his reps and Philly are working to make it happen this month

Over the past two seasons, the Philadelphia Eagles black-on-black jerseys have become a sign that the team is playing a meaningful prime-time game. Though the jerseys may not age well, in 2016, the jerseys unquestionably fall under the category of "fresh," and when coupled with the fact that they are always worn in important games, it's easy to see why the jerseys are so popular. That's exactly why the Eagles shouldn't wear the jerseys during the 2016 season.

Between Thanksgiving 2009 and Week 13 of the 2013 season, the Eagles didn't wear their black alternate jerseys. The jersey didn't cease being nice during that time, but it appears that the Eagles implored an interesting strategy. For more than three and a half seasons, the team didn't wear what most consider to be their nicest jersey. When they brought it back, rather than just wearing the jersey, they turned it into an event, dubbing the Sunday two days after Black Friday "#BlackSunday."

"Black Sunday" was so popular that when the Eagles hosted the New York Giants on Sunday Night Football during Week 6 of the 2014 season, they spent the entire week promoting #BlackSunday. The difference this time was the Eagles spent that week not only promoting the black jerseys, but promoting an all-black uniform that featured black pants as well. Adding the pants was a simple touch in theory, but the team did such a good job marketing the event that they won a 2015 American Advertising ADDY Award.

The problem since then is that the Eagles have overexposed the black-on-black jerseys, wearing them on three separate occasions. The jerseys haven't become less liked, but the effect that they have in the week leading up to the game they worn in seems to have been minimized.

Realistically, the Eagles may compete for a bad NFC East in 2016, but they aren't a team that has a chance to seriously compete in the playoffs. 2016 is also the first year of Doug Pederson's tenure and will likely feature the Eagles using one of Sam Bradford of Chase Daniel at quarterback the entire season, not Carson Wentz, who they ultimately hope will be their franchise quarterback.

If the Eagles wait a season or two for the next time to wear their black-on-black jerseys, they may be able to recreate the marketing effect that they had in 2014, while also wearing the jerseys in a time when Carson Wentz, they hope, is starting to show flashes of being the team's franchise quarterback.