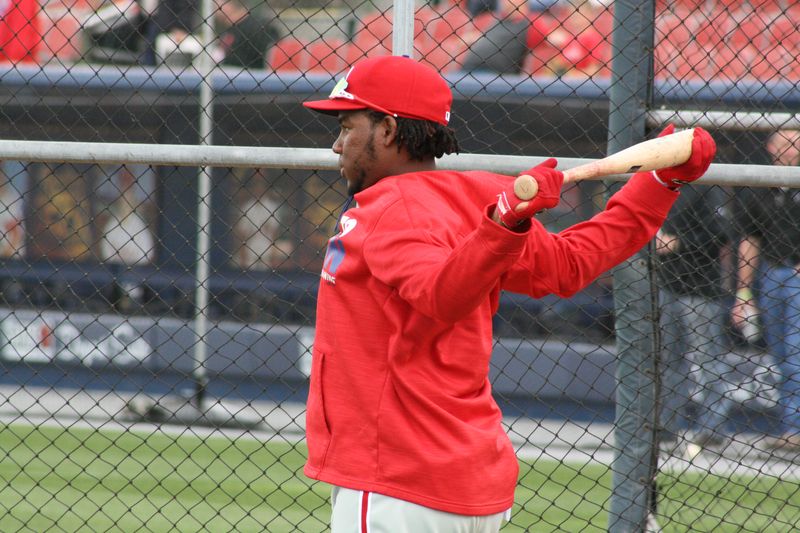 Maikel Franco has had a relatively quiet 2016, despite bigger expectations (Frank Klose/Philliedelphia)

Should we be concerned about Maikel Franco? He was struggling and now he is out with an injury.  Who could replace him if he goes on the disabled list?
~Jose

Some felt that Phillies third baseman Maikel Franco was destined for a 30 home run, 100 RBI season.   Franco currently has 11 home runs and has driven in 33 runs.  That's enough for a pace of 28 home runs and 85 runs batted in.  That is not too shabby.

But, there are some concerns with Franco's low batting average.  Through 226 at bats, Franco is batting just .252.   The good news is that his June numbers include three home runs, five runs batted in, and a .278 batting average.  That is certainly an improvement over May, when Franco batted just .230 with three home runs and 14 runs batted in for the entire month.  His struggles contributed certainly to the hot Phillies start cooling down.

The injury does not seem like much to worry about.  Franco actually homered on Sunday after the rundown play that led to a sprain of his knee.  The Phillies felt it was more important to rest Franco than to put him out on the field less than 100 percent.  That is the wise thing to do for a team whose greater picture in 2016 is to continue to develop players for the future.

Andres Blanco batted third and played third base in Franco's absence.  Blanco will likely get another start or two if the injury is still thought of as minor and might miss just a few days.  If the injury involves a disabled list stint for Blanco, then the team might see Cody Asche get some time at third base again.   Last season when Franco finished the year on the disabled list Asche slid back to third base.  That would allow some of the young outfielders such as Tyler Goeddel to get some more time.   Jimmy Paredes can also play third base, but his defense is considered sub-par and he would probably not play too many games there.

As for Franco's struggles, they were somewhat to be expected.  After his rookie campaign of 2015, pitchers went into games with scouting reports against Franco.  They knew just what pitches he would struggle with, and he saw plenty of them, as is customary for any player's sophomore season.  Franco seems to be making adjustments back, which explains him getting better after a rough month of May.

How long until the Phillies will see prospect Mickey Moniak?  Do you think it was the right pick?
~Tim

While Keith Law said on the Sports Bash last week that he had outfielder Corey Ray as his top pick, the Phillies did "fine" by selecting outfielder Mickey Moniak.  While that does not sound like a ringing endorsement, it is not really a sharp criticism either.  Let's face it, the draft can be a crap shoot at times.

The Phillies seemed comfortable with Moniak's asking price (they likely discussed that ahead of time) and that may have been a factor that helped them make a decision.  Phillies former president Pat Gillick scouted him heavily and they are comfortable with the player.  If that means that the Phillies now have money to sign Cole Stobbe, who fell beyond where many had him destined to sign, the team may end up with three solid assets in the system.

Just how high their ceiling is remains to be seen.  All the Phillies (and every other team) can do is look for tools and roll the dice on them.  The Phillies did indeed do their due diligence and seem pleased with their choices.

The good news is that the Phillies have plenty of other prospects moving through the system right now that they will want to look at between now and then.  Having depth at different levels is not necessarily a bad thing.

When will some of the offense at Reading make it up to Philadelphia?
~Michael

The offensive production at Double-A Reading has been pretty incredible.  Catcher Jorge Alfaro is second in the Eastern League in batting average.  The two leaders in home runs are outfielder Dylan Cozens with 19, followed closely by Rhys Hoskins with 16 home runs.  Cozens and Hoskins are second and third in the league in runs batted in, respectively.  Cozens leads the league with a .952 OPS while Hoskins ranks sixth.   Before getting too excited about this offensive production, Phillies fans can look to Triple-A Lehigh Valley.

After being promoted from Double-A Reading, Phillies top prospect J.P. Crawford is batting just .165 at his new level.  2015 Eastern League most valuable player Brock Stassi struggled in the early going at Lehigh Valley.  After a recent hot streak, Stassi has increased his batting average to .265.  Andrew Knapp has a current 10-game hitting streak and is now batting .267.  In other words: success at one level does not translate to instant success at another.

The Phillies will have some new talent heading into the system once the 2016 MLB draft picks get signed.  That will have a domino effect and some players may advance in the Phillies system.   In terms of Hoskins, Alfaro, and Hoskins, expect them to get a look at Triple-A before being considered for a Major League call-up.  That will be the case, even if the Major League club continues to struggle.