Eagles Flyers Phillies Sixers About Us Write For Us
Previous month:
June 2016
Next month:
August 2016

Atlanta, GA - The Philadelphia Phillies and Atlanta Braves square-off in game three of their four-game series at Turner Field in Atlanta tonight. The Phils took the first game, 7-5, on Thursday thanks to home runs from Maikel Franco, Tommy Joseph and Aaron Altherr. On Friday, Braves rookie Tyrell Jenkins stymied the Phillies bats, leading Atlanta to a 2-1 win. After the first two games of the series, both teams hold a .240 batting average on the season.

This evening's game comes two days before the Major League Baseball non-waiver trade deadline on August 1. In addition to tonight's Phillies starter, Jeremy Hellickson, garnering interest from multiple teams, talks have reportedly heated up in the last few days between the Phillies and Rangers regarding 24-year-old right-hander Vince Velasquez.

Opposing Jeremy Hellickson tonight will be Julio Teheran, who has a strong career track record against the Phillies and is also the center of some Braves trade rumors. First pitch is set for 7:10 p.m.

The Eagles announced on Saturday that former safety Brian Dawkins is joining the teams scouting department.

Dawkins is the recipient of the NFL’s Nunn-Wooten Scouting Fellowship, a new initiative in the league meant to introduce former players into NFL scouting. Following the announcement, the Eagles' legend was in attendance as the team strapped on full pads for the first time this summer.

Eagles starting quarterback Sam Bradford looked sharp in 11-on-11 team drills this morning. On one play, Bradford faked a handoff to Darren Sproles from the shotgun, dropped back two steps, then floated a perfect pass 40-yards down the middle of the field to Nelson Agholor, who was running a “double-move” route. 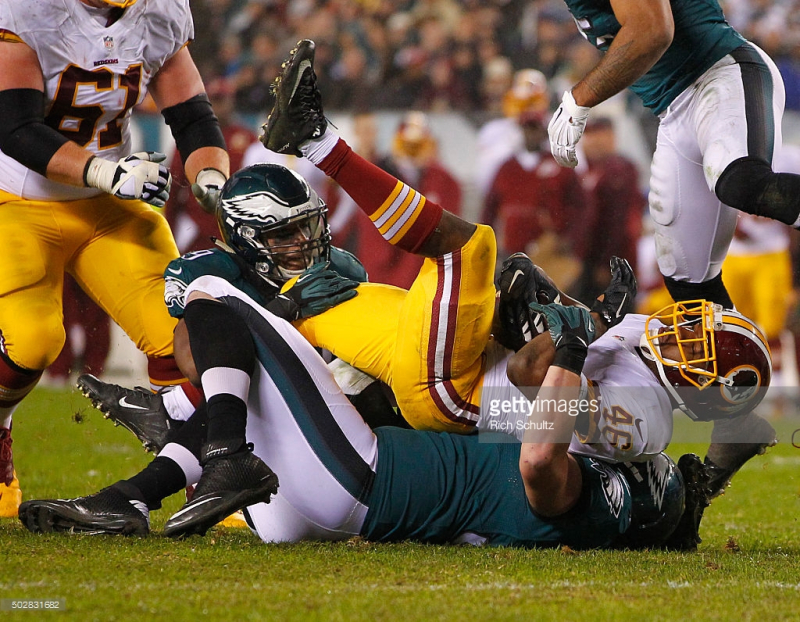 When Eagles coach Jim Schwartz met with the media for the second time this training camp on Saturday, the defensive coordinator emphasized the importance of his defenders playing as a unit.

“I told our guys the other night with the Olympics coming up, the record for the 400 meters is like 43-seconds or something. The record for 4x100, same distance, is like 36-seconds. The idea there is teamwork can trump individual play. I think if were doing our job with training camp, if our players are responding well in the scheme, if we have a scheme that matches the players, we’ll see the sum should be greater than the individual parts.”

Jim Schwartz formerly served as Buffalo Bills defensive coordinator where he coached Eagles cornerback Leodis McKelvin. On Saturday, reporters asked Schwartz why the 11th overall pick in the 2008 NFL draft took a few years before becoming an upper-echelon defensive back.

“It took him a little while to get started. I thought he really came into his own before I got to Buffalo in 2012. The year I was there he was playing at a pro bowl level, I thought, until he broke his leg or ankle in the Miami game. Whatever happened before that I can’t speak to… He’s responded well here, he’s a veteran player. It’s nice having guys like Leodis, guys like Nolan Carroll, guys like Malcolm Jenkins, guys like Rodney McLeod.”

Schwartz was also asked to describe the character of first-year Eagles linebacker Nigel Bradham, as well as what he brings on the field.

“I think you’re gonna like the way he plays football. He’s a tough physical player, he plays fast. He’s a guy that had a little bit of injuries last year, wasn’t able to finish the year but he fits what we’re doing.  He’s a professional, he’s young, it’s hard to call him a vet but I guess he is a vet. [It’s] good to have him here.

Brian Dawkins, who is joining the Eagles scouting department, answered a few questions about his new position with the Eagles on Saturday morning.

“I’m looking forward to seeing if this is something that will lead to something even bigger.”

It wouldn’t be a surprise to see Dawkins promoted through the ranks of the Eagles organization in the coming years.

It was February 2009 when Eagles fans watched as Brian Dawkins, the legendary safety dubbed Weapon X, departed from the only team he ever knew in Philadelphia to sign with the Denver Broncos.

Since that day, it has been about finding the closest thing to Dawkins at the safety position. There was no replacement.

Dawkins returns to the Eagles, however, in a new role that may help find the closest thing. Dawkins has joined the Eagles scouting department, the team announced Saturday.

The Eagles were among the more unpredictable teams in the NFL last season. After losing to Tampa Bay and Detroit by a combined 59 points last November, the Birds rallied the following week to defeat Tom Brady and the New England Patriots 35-28 in Foxborough.

As unforeseeable as NFL seasons often are, here’s a look at Philadelphia’s five toughest matchups.

As Philadelphia Phillies fans have become accustomed to in 2016, starter Vince Velasquez threw six innings in Friday evening's loss to the Atlanta Braves, giving the team a chance to win the game by only allowing two runs. He also gave potential trade suitors a chance to watch him.

According to Jim Salisbury of Comcast SportsNet Philadelphia, one of the many teams that had scouts at the game this evening was the Texas Rangers, who Salisbury notes are more than just doing their due-diligence:

A major league source told CSNPhilly.com that the Phillies and Texas Rangers are “pretty deep” in trade discussions involving Velasquez.

This isn't the first time that Velasquez has been connected to the Rangers. Earlier this evening, Ken Rosenthal of FOX Sports reported that the Rangers were 'all over' the 24-year-old, but downplayed the chances of a trade actually happening. This followed up a report from his colleague Jon Morosi earlier this week that first noted the interest of the American League West leaders.

Earlier today, I took a look back at what seemed like a strange visit from top Phillies' scout Charley Kerfeld to watch the Rangers take on the New York Yankees late last month. In hindsight, the visit may have been the Phillies' first public look at what a trade for Velasquez could potentially look like. It's worth noting that at that time Jurickson Profar was with the team, while Joey Gallo was in the minor leagues.

Velasquez, who is under team control through the 2021 season, is 8-2 with a 3.34 ERA and a 2.0 WAR (per Fangraphs) in 2016. Various reports have suggested that the Phillies weren't thrilled with his trade physical last winter when they acquired him as part of the Ken Giles trade with the Houston Astros.

ATLANTA—Vince Velasquez was able to work out of trouble several times during Friday's night's Phillies-Braves contest, but so was Atlanta starter Tyrell Jenkins.

Jenkins stranded seven runners over six innings, including three in the fourth after the Phils loaded the bases. In the third, Atlanta countered the Phillies' lone run with two of its own en route to a narrow 2–1 win, evening this series at one game apiece.

As the August 1 non-waiver trade deadline looms for teams around Major League Baseball, the Phillies have had their phones ringing constantly for players such as Jeremy Hellickson and Jeanmar Gomez.

However, as time passes, Vince Velasquez has popped up on the radar of one team in particular: the Texas Rangers.

According to a tweet by FOX Sports' Ken Rosenthal, the "Rangers are 'all over' Vince Velasquez." The notion that Velasquez could possibly become a Ranger has been spreading the past couple days, but it all sounded like an unlikely rumor. How could the Phillies pass up on a future ace in their young rotation?

Sources: #Rangers “all over” #Phillies’ Velasquez, scouting him and doing extensive background work. Deal unlikely, however.

In Sports Talk Philly writer Brandon Apter's article on Monday, he mentioned that preliminary remarks by the Rangers were made about their interest in the 24-year-old pitcher, but the price would obviously be high from the Phillies standpoint.

When the Phillies told the Marlins that in order for them to trade for Hellickson, Miami would have to offer up a top-five prospect in their organization. It's almost certain that they would ask the same of Texas, adding the fact that Velasquez is obviously a much bigger asset to the future of the team.

Further noted, the Phillies sent a scout to the Rangers-Yankees matchup on June 28 to look at possible players on the Texas side, as stated in Tim Kelly's article Thursday night.

While this sounded like they would be looking at prospects in exchange for Hellickson and Gomez, it almost makes people wonder if the Phillies would be keeping prospects such as Joey Gallo, Lewis Brinson, Nomar Mazara, and even second-baseman Jurickson Profar in mind if they were asked about Velasquez.

According to Rosenthal, a deal seems unlikely at current time, but if the price is right, and the Rangers do in fact continue to research Velasquez, a possible trade during the waiver period after the deadline might not be out of the question.

Time will tell, but it already seems like the Phillies will have their work cut out for them over the next three days.

It's a bit of a late start tonight as the Braves are holing their alumni weekend ceremonies tonight. Tyrell Jenkins, who the Braves acquired when they dealt Jayson Heyward to the Cardianls, makes his fourth big league start tonight. Jenkins has pitched to some poor results so far but in his defense, his last outing at Coors Field (seven runs through 3.1 innings) went the way a lot of young pitchers starts there go.

Going for the Phillies is Vince Velasquez who is coming off his worst start since his trip to the DL where he pitched a no decision in Pittsburgh last Sunday. Velasquez did make a start at Turner in May, allowing four over six and striking out five. He'll obviously look for better results against one of the lessor lineups in the league but as we saw last night, they can give anyone a headache.

Similar lineup to last night except that Cameron Rupp is catching tonight. Makes sense as the Phillies plated seven runs last night and considering Jenkins' 6.17 ERA, they may have a good shot at plating a few more this evening.

Legion of Doom to reunite at NHL Legends Classic

As if Eric Lindros getting inducted into the Hockey Hall of Fame wasn't great-enough news,  it managed to get even better.

Mikael Renberg will head to Toronto to play alongside Lindros and John LeClair in the Legends Classic, reuniting one of the most prolific scoring lines in franchise history. The Legion of Doom will take the ice with Team Lindros against Team Salming, comprised of Toronto Maple Leafs legends.