Eagles Flyers Phillies Sixers About Us Write For Us
Ruben Amaro would 'love' another shot at being general manager
Phillies rumors: Tigers scout Hellickson, club's asking price for Velasquez revealed

ATLANTA —  In what could be his final start with the Philadelphia Phillies (48-58) ahead of the August 1 non-waiver trade deadline, right-hander Jeremy Hellickson earned his eighth victory of the season in opposition of the MLB-worst Atlanta Braves (36-68) Saturday evening at Turner Field.

The game's first run came via a one-out single in the top of the second by catcher Cameron Rupp, scoring first baseman Ryan Howard from second following his leadoff double.

The Phillies maintained their 1-0 lead until the bottom of the third. After striking out opposing pitcher RHP Julio Teheran to start the frame, Hellickson allowed four singles and two runs over his next five batters faced. The two RBI singles came from right fielder Nick Markakis and third baseman Adonis Garcia, their 52nd and 33rd RBIs of the season, respectively.

Hellickson would help his own cause in the top of the fifth. After Rupp singled to left, securing his 17th multi-hit game of the season, and left fielder Cody Asche singled to right, Hellickson doubled down the left field line to bring both runners home and regain the lead, 3-2. It was his first career double out of 98 plate appearances and 78 at-bats.

One inning later with the bases loaded, shortstop Freddy Galvis hit a two-RBI single to center, increasing the Phillies' lead to 5-2. The Braves added a run the next half-inning, decreasing their deficit to two runs via a RBI single by catcher Anthony Recker.

In the top of the eighth, the Phillies scored four insurance runs to grab a 9-3 lead. All four runs were scored without a single hit in the inning, with walks by pinch hitters Tyler Goeddel and Taylor Featherston, second baseman Cesar Hernandez and center fielder Odubel Herrera and a hit-by-pitch of right fielder Aaron Altherr. Herrera and Altherr's at-bats both occurred with the bases loaded, thus securing their 37th and third RBIs respectively for the season. The other two runs came home after third baseman Maikel Franco reached safely on an error by Garcia.

The Braves scored two runs in the bottom of the eighth against RHP Severino Gonzalez. RHP Jeanmar Gomez threw a scoreless ninth on 18 pitches, capturing the Phillies' 48th victory.

The Phillies sent all 9 batters to the plate in T8 and none of them got a hit. It's the first time Philly has done that since July 17, 1992

Phillies RHP Jerad Eickhoff — who has lost three consecutive decisions — will take the mound Sunday afternoon in the series finale. It will be the Phillies' fourth-to-last contest at Turner Field, a venue in which they are 82-87 all-time. Eickhoff is 2-1 with a 1.73 ERA and 18 strikeouts over four career starts (26 IP) against the Braves. (Time: 1:35 p.m.; TV: CSN; Radio: SportsRadio 94 WIP). 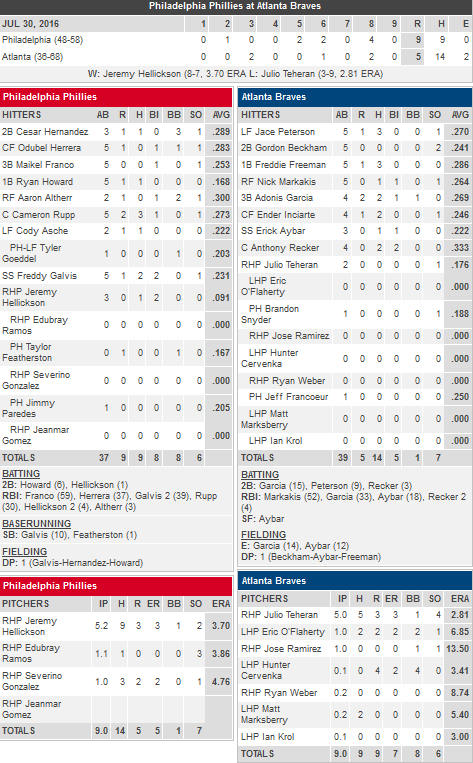