Eagles Flyers Phillies Sixers About Us Write For Us
Previous month:
July 2016
Next month:
September 2016 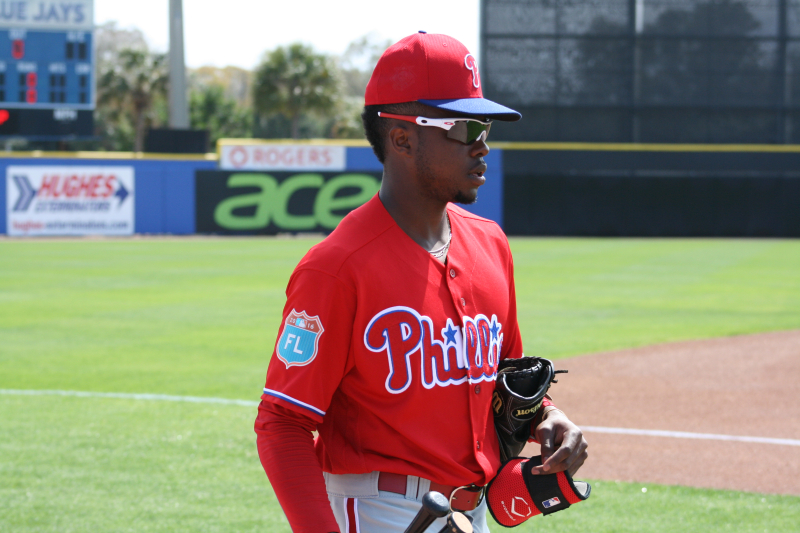 When Phillies prospect Roman Quinn took a pickoff throw to the head on Saturday night, some feared that Quinn's season may be over.  Assigned to Double-A Reading, the Phillies placed Quinn on the seven-day disabled list with a concussion shortly thereafter.  On Wednesday, the Phillies got some good news about their center field prospect.

Jim Salisbury of CSN Philly reports that Quinn could return to the Reading Fightin' Phils:

The Fightin' Phils season ends on Monday with a 1:00 p.m. game in Trenton.

After the posteason, the Phillies may consider Quinn for a September call-up.  Already on the 40-man roster, Quinn would be an easy name to call upon.  Other prospects including J.P. Crawford and Nick Williams must be added to the 40-man roster first, which could mean that they may not have such an opportunity.

PHILADELPHIA — The Philadelphia Phillies (60-72) will look to avoid being swept for the seventh time this season, as well snap their eight-game losing streak to the division-leading Washington Nationals (77-55) as southpaws Adam Morgan and Gio Gonzalez face off Wednesday evening at Citizens Bank Park.

In their franchise record-tying eight straight defeats to the Nationals — five being at home — the Phillies have been respectively outscored and outhit 45-18 and 73-43.

Morgan has lost 11 of his last 12 decisions, while Gonzalez, a former Phillies prospect, has won five of his last six en route to a 3.20 ERA over 50 2/3 innings dating back to July 10 at Citi Field.

One of the biggest question marks concerning the Philadelphia Eagles is new head coach Doug Pederson.

Pederson enters the season as one of the biggest unknowns in the entire league as far head coaches are concerned. But throughout the preseason, followers of the team have been able to get a taste of what the new coach will bring to the table for the 2016 season and beyond.

There have been questions about how qualified Pederson is to serve as a head coach. While he has plenty of experience working in the NFL as both a player and assistant coach, there is still doubt surrounding him.

As offensive coordinator in Kansas City, it has never been made clear about how much say and control that Pederson had over the offense of the Chiefs. Andy Reid has always had his fingerprints all over his offenses throughout his career, rarely (if ever), surrendering playcalling duties to his assistant coaches.

Pederson now has full control over the offense in Philadelphia, and while the preseason game plans are always vanilla and not very elaborate, there have been some encouraging signs from the new head coach.

PHILADELPHIA — Behind eight strong innings on the mound by RHP Max Scherzer, the Washington Nationals (77-55) delivered the Philadelphia Phillies (60-72) their 23rd series defeat of the season Tuesday evening at Citizens Bank Park.

The Phillies' only produced runs against the 2013 American League Cy Young Award winner came with one out in the bottom of the seventh, as first baseman Ryan Howard launched his 20th home run of the season to left field, a two-run blast that pulled the Phillies within one.

In accomplishing such feat, Howard joins Hall of Fame third baseman Mike Schmidt (14) as the only players in franchise history to have 10 or more such seasons. The blast also put Howard into a three-way tie with Norm Cash and Jeff Kent for 73rd place on the all-time home runs list with 377.

The team failed to complete a late-inning comeback, however, with seven of their final eight batters failing to reach base. Nationals closer Mark Melancon successfully recorded his 37th save of the season in the ninth, which is third-best in the National League trailing only  Jeurys Familia (42) and Kenley Jansen (39) of the New York Mets and Los Angeles Dodgers, respectively.

The defeat secured the Phillies their eighth straight loss to the Nationals, which ties a franchise record previous set four times, the last being June 2, 1989 to July 5, 1989.

Jeremiah Trotter, Merrill Reese to be Inducted into Eagles Hall of Fame

The Eagles will add two new members to their Hall of Fame during the 2016 season.

Broadcaster Merrill Reese and former linebacker Jeremiah Trotter will be inducted into the Eagles Hall of Fame on Monday, Nov. 28 at halftime of the Eagles game against the Packers.

PHILADELPHIA — The Philadelphia Phillies (60-71) have a tough task in facing Max Scherzer of the Washington Nationals (76-55). The four-time All-Star has baffled Phillies hitters since joining the Nationals last year, going 5-0 with a diminutive 1.94 ERA over seven starts. The only Phillie with good numbers in a significantly number of at-bats against Scherzer is Odubel Herrera, who has .316 average with a double and five walks. Pitching for the Phillies is righty Jerad Eickhoff, who is taking on the Nats for the first time this season and just the second time in his career.

The Phillies have lost their last seven games versus the Nationals, dating back to May 30 of this year. This ties the Phils' longest losing streak against the Nats since they were relocated to Washington D.C. prior to 2005. During the current seven game losing streak, the Phillies have been outscored 42-16. The offense has a big hurdle to overcome in Scherzer, but only time will tell whether the bats will perk up or not. 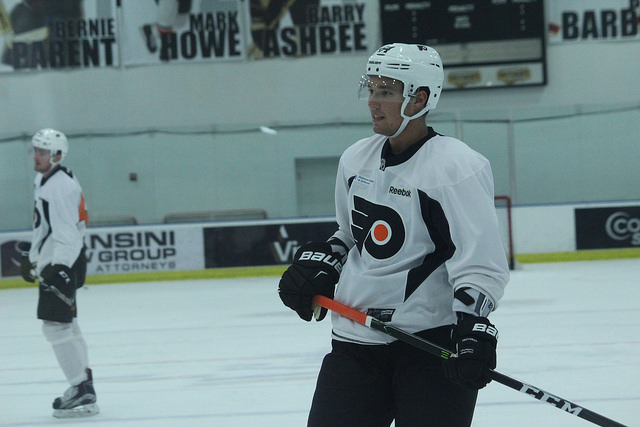 The Flyers will start rookie camp in mid-September as they begin preparations for the 2016-17 season. To close out rookie camp, on Sept. 21, they will meet with another team's top prospects in an exhibition match.

The Flyers and Islanders will face off at Northwell Health Ice Center in East Meadow, NY at 6 p.m. on Wednesday, Sept. 21 for a prospects game. 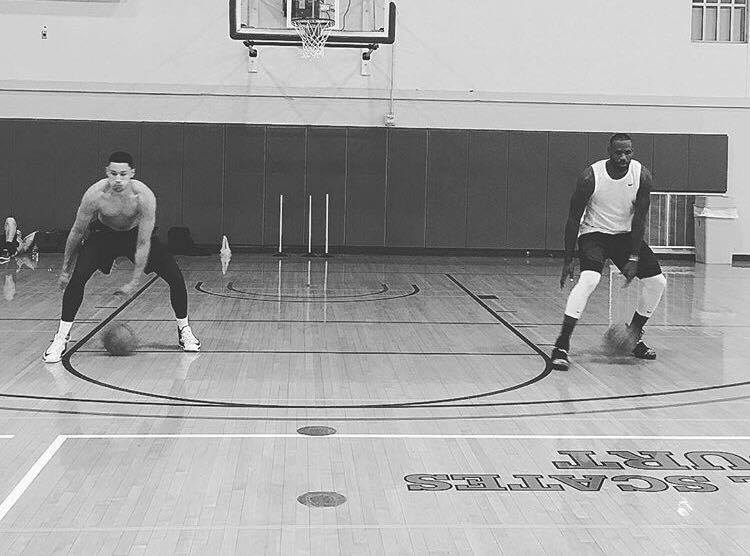 The Philadelphia 76ers begin their preseason schedule on October 4 against Boston with training camp at Stetson University set to begin the week prior. Each player on the roster, and around the NBA, have their own personal workout regimen's and strategies to get themselves ready for a season and No. 1 overall pick Ben Simmons is no different.

After a short trip to Austrailia a little over a week ago, Simmons has arrived back in the states. He participated in the Sixers Beach Bash this past weekend, where Joel Embiid was seen rejecting a young boy with an emphatic block on the court in Avalon, New Jersey.

This week, Simmons looks to be working out with NBA World Champion and 2015-16 NBA Finals Most Valuable Player, LeBron James.

Simmons and James have been friends prior to the draft and the newest centerpiece of the Philadelphia 76ers doesn't have an issue calling James if he ever needs advice.

In six Summer League games with the Sixers in July, Simmons averaged 10.8 points, 7.7 rebounds and 5.5 assists on 32.2 percent shooting.

Thompson, 22, went 11-5 at the Triple A level in 2016, while posting a 2.50 ERA and striking out 87 in 129.2 innings. While he won't get to reap the rewards, Thompson has been a major part of the 2016 IronPigs season, with the club's 80 wins second best in the entire league and currently good enough for the Wild Card lead.

Since being promoted to the big leagues in early Aug., Thompson has struggled. Despite allowing only two runs over seven innings in last night's loss to the Washington Nationals, Thompson has a 1-4 record and a 7.86 ERA to show after his first five starts with the Phillies.

The Dallas, Texas native was acquired from the Texas Rangers in July of 2015 as part of the Cole Hamels trade.

Tebow in the cage. Judge for yourself. You tell me if that swing gets past AA. pic.twitter.com/7Ij0pfK5cv

LOS ANGELES — The Philadelphia Phillies and roughly two dozen other Major League Baseball teams are in attendance, along with more than 50 credentialed media members, at former National Football League quarterback Tim Tebow's showcase at the University of Southern California's Dedeaux Field on Tuesday.

"We're seeing some special assistants. We're seeing some amateur scouting directors here from teams. These are not just low-level scouts in many cases. These are people with a lot of influence in these respective organizations," said MLB Network's Jon Morosi in conversation with Chris Russo of "High Heat".

"This is not just something where they are going through the motions. They are sending people here with a lot of 'juice' in the industry to make decisions. I think there may be scouts here pleasantly surprised by what Tim Tebow can do."