Eagles Flyers Phillies Sixers About Us Write For Us
Around the NFL: Bridge over troubled water
Flyers Unveil 50th Anniversary Season Jerseys 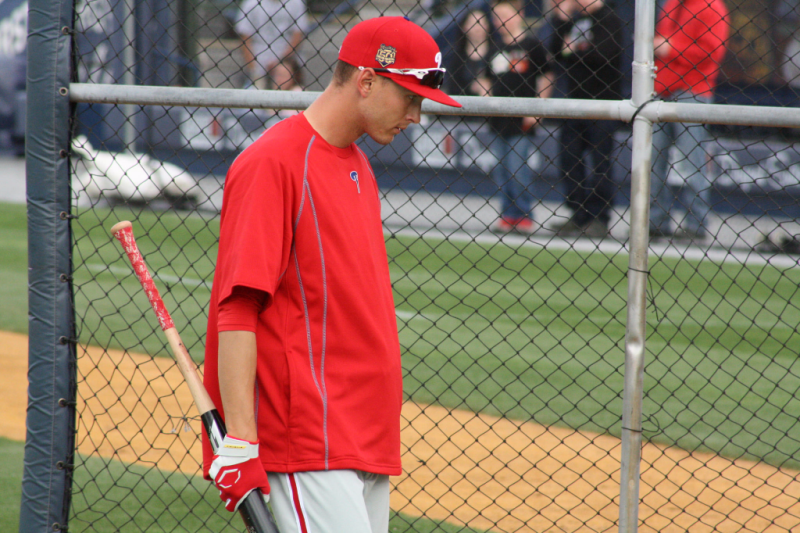 With September just a day away, rosters are set to expand across Major League Baseball and the Philadelphia Phillies will use the time to evaluate some of their young talent already on the roster along with some from the minor leagues once their seasons end.

Phillies skipper Pete Mackanin met with reporters prior to Tuesday's 3-2 loss to the Nationals and spoke about a number of things, including some of his plans for September. He talked about what he wanted to do at first base, but the puzzling comments came when the outfield was brought into the picture. With Odubel Herrera and Aaron Altherr the outfield regulars heading into the final month of the season, that leaves a corner outfield spot for a trio of players. Out of Jimmy Paredes, Peter Bourjos and Tyler Goeddel, it would make most sense to give Goeddel playing time, right? He needs Major League at-bats and showed promise while playing regularly between May 5 and June 1, slashing .297/.350/.500. Mackanin deemed Paredes as an extra player, but he was in the lineup for the fourth straight game on Tuesday. As for Goeddel, the Phillies skipper doesn't really see why he needs to play him.

“I’ve seen enough of Goeddel to know – we’ve kept him (on the roster) this long and we’re going to keep him (as a Rule 5 pick) and we’ll see where we go next year with him,” Mackanin said. “I don’t see a need to play him, especially after he hasn’t played so much. What’s the point?” [PhillyVoice.com]

With Paredes and Bourjos not in the picture for the Phillies next season, it would make the most logical sense to play Goeddel to see where he fits moving forward, even though he's likely going to start the year in Triple-A. The Rule-5 pick has shown signs of potential not only at the plate with regular playing time, but with a few outfield assists as well. Top prospect Nick Williams could also get a look, but he's struggling in Triple-A, hitting .195 with 18 strikeouts over his last 10 games.

First base was also a hot topic on Tuesday, with Tommy Joseph set to get the majority of playing time in September. When he came up, he split time with Ryan Howard before overtaking the veteran at first base by the middle of June. From May 22 to June 22, Joseph started 24 of the 30 games, but Howard began to show progress in his limited at-bats, earning his way back into the lineup more. Last night against Washington, Howard started for the 12th time in the last 20 games and hit his 20th home run of the season. Mackanin will go from splitting time to Joseph playing nearly every day, hoping to get one last good look at the 25-year-old this season on a regular basis.

“I think it makes sense to see Joseph as much as possible,” Mackanin said, adding that it was his decision, and not an edict from management. “I don’t want to happen to him to happen to (Darin) Ruf, where he didn’t have opportunities to get him at-bats.” [PhillyVoice.com]