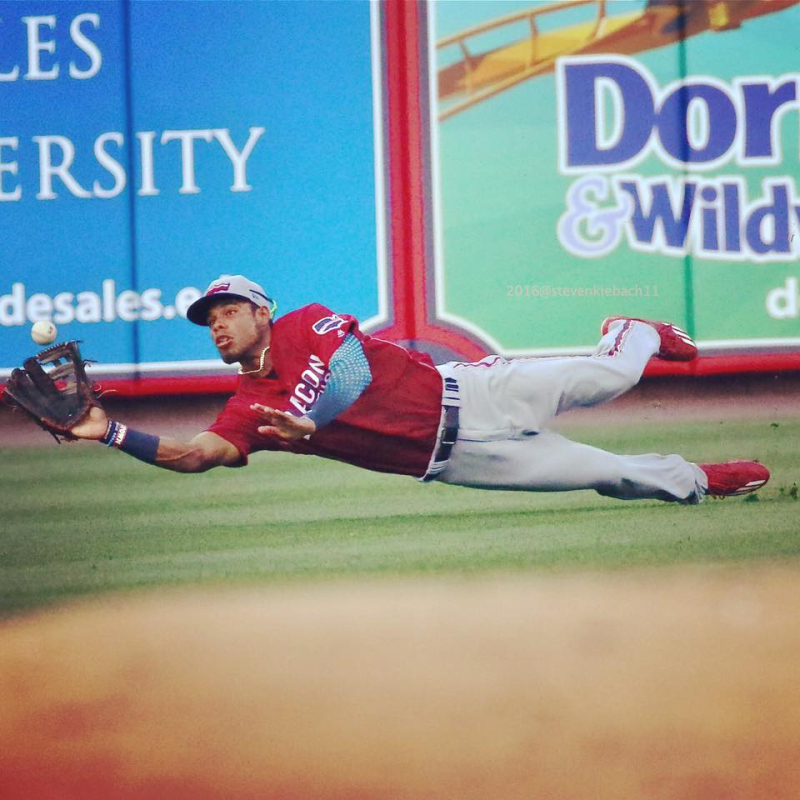 The Philadelphia Phillies decided to challenge some of their top prospects at upper levels this year, promoting them to Triple A and putting them against older competition. One could have expected the Lehigh Valley IronPigs to struggle, especially considering they are in easily the most difficult division in the International League. That has not happened though, and as the summer winds down, the IronPigs are 74-51, good enough for the second best record in both the International League and the North division, just 3.5 games back of their rivals, Scranton/Wilkes-Barre. Many of the Phillies very best prospects have been in Lehigh Valley this year, from J.P. Crawford, Nick Williams and Andrew Knapp highlighting the offensive side, while Jake Thompson, Zach Eflin and Ben Lively have highlighted the pitching. All of this talent has the IronPigs up 5.5 games up in the Wild Card hunt.

The tough part of Triple A baseball is that guys that excel at this level often end up being promoted to Philadelphia. That was the case for Tommy Joseph, who started off on a white-hot .347/.370/.611/.981 clip, hitting 6 home runs in his first 99 plate appearances. Unfortunately for the IronPigs, but great for Phillies fans, guys who hit like this often end up leaving Allentown.

Fortunately, Joseph's exit did not leave the Pigs void of prospect fire power. Nick Williams has had a nice, if unspectacular season, posting a slash line of .268/.298/.439/.736 season, while hitting 12 home runs and posting 46 extra-base hits.

While Williams walk rate could use a spike, the same cannot be said for the top prospect of all, J.P. Crawford. Crawford, who has posted a .253/.342/.327/.669 line, which is not impressive on the surface, when considered against his age and relative amount of plate appearances in the lower minors, is fairly impressive. Crawford has a fairly impressive 36 walks against 45 strikeouts at this stage.

Two prospects who are a bit more advanced, Andrew Knapp and Brock Stassi, have held their own at this level this year. Knapp, an All-Star for the International League, has posted a .261/.323/.377/.700 line, with seven home runs and 26 extra-base hits. The important thing though for Knapp this year was working on his receiving skills behind the plate, and he has caught many of the pitchers now pitching in Philadelphia, and developed along with them. Stassi, in a very important season for his potential future, has impressed with his plate discipline, posting a .262/.365/.435/.800 line, with 10 home runs and 34 extra-base hits. Perhaps more impressive about Stassi is his excellent defensive skills at first base.

Ben Lively has been very solid for the Pigs, posting 100.2 innings since his promotion, while going 8-5, with a 3.49 ERA. Nick Pivetta has recently joined him at the Triple A level, and has a 1.64 ERA for his first 11 innings. The Pigs have been largely anchored by David Buchanan, their one constant this season in the rotation, who is 8-8 with a 4.05 ERA over 142.1 innings.

As can be expected, the bullpen is a constant shuttling act with the big club. Luis Garcia, Edubray Ramos, Severino Gonzalez, Colton Murray, Michael Mariot, Frank Herrmann, Dalier Hinojosa, Elvis Araujo, and James Russell have all spent time up and down this season. Closer Edward Mujica made the All-Star team, and was released the next day to go to Kansas City and pitch in the majors.

Stability is not something Triple A teams can expect in their pitching staffs. That is absolutely the case here.

With a 5.5 game lead in the Wild Card with 19 games to go, it would take a collapse to not reach the post-season for the second time in franchise history. Down 3.5 in the division though, the Pigs still have a shot to win the division, and playoff home field. They will play two with division leading Scranton/Wilkes-Barre next week, in Allentown, their last shot to make up ground in head-to-head games. The Pigs are home for just seven more games this season, and are being raided almost daily by the big league club, particularly for pitching. Even so, they appear to be on their way to the International League Wild Card win, and playoff baseball for some of the Phillies top prospects.