Carson Wentz, Doug Pederson and the Importance of Turnovers

A lot of praise has been heaped on to the Eagles after three games. Carson Wentz and Doug Pederson have grabbed the headlines with their performances, while Jim Schwartz's defense has dominated the opposition and captured the hearts of the entire fanbase.

But one thing hasn't garnered the attention it deserved. Through three games, the Eagles offense has yet to turn the ball over.

That would be impressive with any quarterback lining up under center, but with Wentz, a rookie, it's nothing short of incredible.

During Wentz's short time as the starter at North Dakota State, he threw just 14 interceptions in 23 career starts. His interception percentage during his college career was just 2.2 percent, which is roughly the same percentage Donovan McNabb maintained over his entire NFL career.

But now, in his rookie season, Wentz has turned into the second-coming of Nick Foles circa 2013, throwing 102 passes without one getting intercepted. However, he has relied a lot on short passes and a very efficient screen game over the past two weeks, which has given him a lot of easy reads and simple throws to make. But, that isn't a knock on Wentz's talent or performance, instead it shows a young QB, who is still trying to find his feet in the NFL, playing within his offense and consistently making smart decisions with the football.

What is truly interesting is how unprecedented this three-game streak is, at least for teams not coached by Pederson. In NFL history, there have been only two teams to start a season 3-0 while not committing a turnover, the 2016 Philadelphia Eagles and the 2013 Kansas City Chiefs, who just so happened to employ Pederson as their offensive coordinator. Under direction from head coach Andy Reid and Pederson, the Chiefs committed the fewest number of turnovers from 2013 to 2015. In addition, the Chiefs never threw more than eight interceptions in any given season.

So not only is this offense's performance historically good, it has a decent chance of sustaining its success for a long time and shouldn't be considered such a flash in the pan thing, because both Wentz and Pederson have proven in their careers that they know how to take care of the football. Granted, at some point the ball will just bounce a funny way and into a defender's arms because that's just the way football works, but it won't be happening with regularity.

But why are turnovers so important? 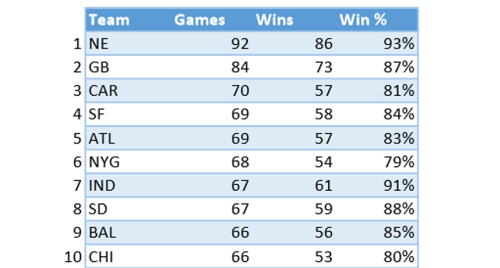 With the exception of Atlanta and San Diego, every team on that list has a Super Bowl appearance during that time span. New England obviously stands out as a team that has won 91 percent of the games they've won the turnover battle. In that same decade, the Eagles won the turnover battle 59 times (18th in the league) and won 50 of those games (14th) for a winning percentage of 85 percent (ninth).

But looking at that top-10 list again, most people would be happy to have the success these teams have endured during the past decade. Sure there were some ups and downs, but each one was a solid contender for at least a few years.

Which brings us back to Pederson, Wentz and the Eagles. Yes, they have played extremely well through their first three games, but the plus-six in the turnover margin they've recorded has played a pretty big part in those wins. Even with how impressive the Eagles have been, success in the NFL is terribly fragile. But if the offense can control the ball like they have in the first portion of this season, the Birds could be poised for a playoff berth.