Eagles Flyers Phillies Sixers Union About Us Write For Us
With Goalies Intact, Flyers Still Have Questions in Net
Injury to Simmons opens door for Saric, Holmes 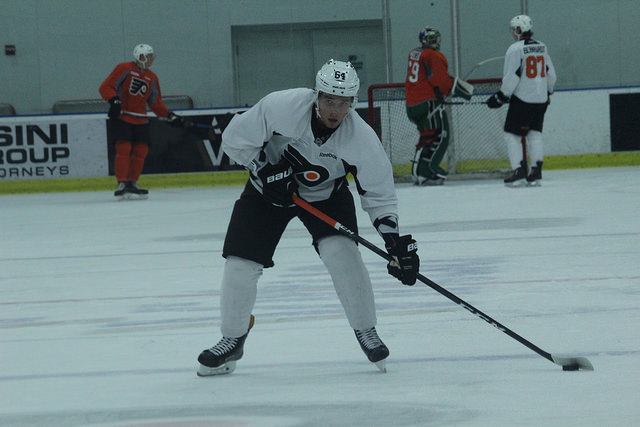 If Flyers fans really want a glimpse of the future, look no further than the team's blue line corps for Saturday night's game.

The Flyers continue the preseason with their fifth game, hosting the Boston Bruins at Wells Fargo Center. Puck drop is set for 7 p.m.

When the Flyers hit the ice, it will mark the preseason debut for four players who participated in the World Cup of Hockey, which just concluded on Thursday. Michal Neuvirth will be in goal for the Flyers with Shayne Gostisbehere, Jake Voracek and Sean Couturier returning to the lineup as well.

Couturier and Voracek have an interesting linemate for Saturday's game. After practicing together on Friday, Dave Hakstol has opted to leave Travis Konecny on a line with Voracek and Couturier, giving the 19-year-old a second straight game to play with two established NHL players. Konecny scored a goal and added an assist while playing with Brayden Schenn and Michael Raffl on Wednesday.

The Flyers defense will also feature three prospects. Ivan Provorov and Philippe Myers will play together as a pairing. Gostisbehere will be paired with Michael Del Zotto. Travis Sanheim will play alongside Andrew MacDonald.

The Flyers top line will once again feature Wayne Simmonds and Schenn with Nick Cousins now serving as the placeholder center in the absence of Claude Giroux, who will soon return from the World Cup as well. Simmonds scored twice in Tuesday's 4-0 win over the New York Islanders.

The Bruins come in off a 2-1 overtime win in Detroit on Friday night in a game that featured a lot of their young players as well. The Bruins will be without some scoring punch as Patrice Bergeron, Brad Marchand and Zdeno Chara all work their way back from World Cup action. The trio accounted for all three goals in Team Canada's deciding 2-1 win over Team Europe in the World Cup Final on Thursday.

The three biggest names in Boston's line rotations from their morning skate are newly-added veteran David Backes, forward Jimmy Hayes and forward David Pastrnak. The Bruins will also be featuring a lot of prospects on defense with Kevan Miller, Colin Miller and Joe Morrow being the only three with NHL experience.

In goal, the Bruins will use the pairing that is likely to start the season in the AHL, Zane McIntyre and Malcolm Subban.

Here is tonight's projected lines based on the morning skate:

Saturday's game will not be televised or streamed on the Flyers website, but can be heard on 97.5 The Fanatic.