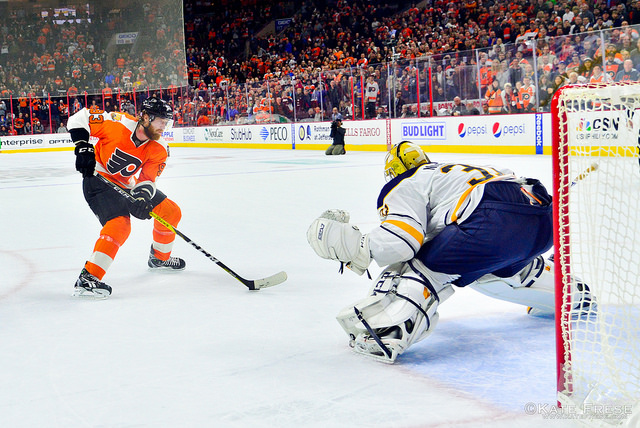 This time, the finished the job.

Three goals in the third period helped the Flyers even the score and earn one point. They managed to get the second one as well with a shootout win over the Sabres, 4-3, on Tuesday night at Wells Fargo Center.

The Flyers controlled much of the early play in the first and generated some good scoring chances that were all answered by Anders Nilsson. The Flyers outshot the Sabres, 11-8, in the first as neither team could get on the board.

In the second, the Sabres wasted no time.

At 2:06, a sharp-angle shot by Zemgus Girgensons was deflected in by Tyler Ennis to put Buffalo on the board first. Just 1:50 later, the Sabres made it 2-0 on a great individual effort by Matt Moulson just six seconds into a power play.

The 2-0 lead held up through a Flyers power play, but the Flyers generated minimal pressure and chances on Nilsson as the Sabres continued to buzz. Another power play late in the period gave them a chance to put a stranglehold on the game.

Moulson did just that with his second goal of the game, again on the power play, and that was enough to chase Neuvirth for Steve Mason. Neuvirth stopped 14 of 17 shots and was pulled early for the second straight start.

The Flyers did get on the board in the third with a memorable goal for a Flyers rookie. A point shot from Ivan Provorov was deflected by Travis Konecny and past Nilsson for his first NHL goal. The goal cut the Sabres lead to two with 15:30 to play.

The Flyers didn't get any closer until another power play with 3:20 remaining in regulation, as Jake Voracek was hit hard to the head by Dmitry Kulikov. Just 24 seconds into the power play, Claude Giroux fed Brayden Schenn for a one-timer that sailed past Nilsson to cut the lead to one.

Another Flyers power play with 2:23 to play gave the Flyers the chance to tie things up. This time, it took 28 seconds for the Flyers to score, as Mark Streit was there to lift the puck over a pileup in the crease to tie the game with 1:51 to play.

Moments later, the Flyers nearly took the lead as Wayne Simmonds hit the post. That was as close as either team would come in the final 1:51 and that forced overtime.

The Flyers had three of the four shots on goal in overtime, but could not score, forcing a shootout.

Giroux scored first for the Flyers in the second round and Mason made saves on Ryan O'Reilly and Kyle Okposo to give Voracek a chance to win it and he did with great patience to beat Nilsson.

Mason made eight saves in the final 24:17 of regulation and five minutes of overtime and two more in the shootout to pick up the win. The Flyers were 3-for-4 on the power play and fired 41 shots on goal, including 22 over the third period and overtime.

The Flyers remain home for the second game of a three-game homestand as they face the Arizona Coyotes on Thursday night. The opening face-off is set for 7 p.m.