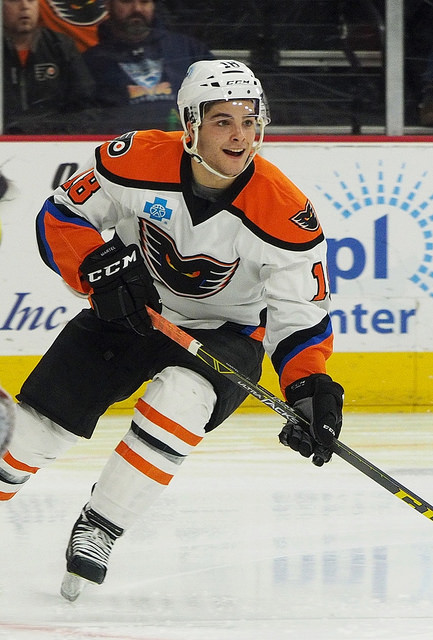 By Brent Baldwin, The Sin Bin

The Lehigh Valley Phantoms rolled into Bridgeport on Saturday night looking to build off Friday’s 5-1 win in Hartford. Defensive miscues and an opportunistic Sound Tigers power play cost them in a 5-4 loss at Webster Bank Arena.

In the first, Bridgeport controlled the early play, and it resulted in them getting the lead just past the midway point of the frame. Josh Ho-Sang found Bracken Kearns wide open in the low slot and he beat Alex Lyon for his third of the season.

1:03 later, Ho-Sang got his first professional goal when he ripped a shot from the far circle that beat Lyon. Both goals were power-play tallies.

A scary moment occurred with about four minutes left in the period when Kyle Burroughs and Danick Martel had a violent collision in the Bridgeport zone. Burroughs was assessed a five-minute major for kneeing. On the ensuing power play, the Phantoms cut the lead in half. Jordan Weal tipped a Mark Zengerle shot past Christopher Gibson.

In the second, Connor Jones collected his second of the season on the breakaway after taking a pass from his twin brother Kellen.

Weal got his second of the night less than a minute later when he took a pass from Taylor Leier and ripped a shot past Gibson.

Lehigh Valley would tie the game with just over six minutes left in the period. A Travis Sanheim point shot was deflected by Colin McDonald, who was screening Gibson. 30 seconds later, T.J. Brennan almost gave the Phantoms the lead, but he hit the post from down low.

The Phantoms threw everything they had at Gibson in the third, and he was fantastic.

It was a defensive miscue by Brennan that gave Bridgeport the lead at 6:47. Brennan tried a backhand clear near his own net, that unfortunately landed directly on the stick of Kearns, and he wristed it past Lyon.

Michael Dal Colle expanded the Sound Tigers the lead to two at 10:47. After taking a pass from Scott Mayfield, he broke in on a two-on-one with Mayfield, kept the puck and fired in on Lyon. The initial save was made, but he batted the puck out of the air for his third of the season.

McDonald deflected a Will O’Neill shot past Gibson to pull Lehigh Valley within one with 1:03 left. Scott Gordon called Lyon to the bench after that, but the Sound Tigers would rag the puck and run the clock out, moving Lehigh Valley to 2-2-1 on the season.

Up Next: The Phantoms travel to ChocolateTown, USA to face the Hershey Bears for a late Sunday afternoon face-off at 5 p.m.