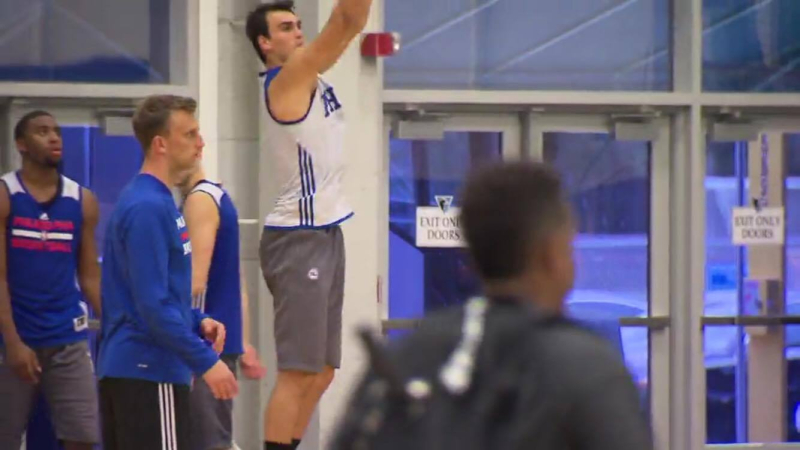 Tonight is the night Philadelphia 76ers fans have waited on for a while. Two years ago, the Sixers selected Joel Embiid third overall and traded for the rights to Dario Saric, who played overseas in Turkey for two years. Tonight, they take the court together in the Sixers preseason opener against the Boston Celtics at 7:00 p.m. at the Mullins Center on the University of Massachusetts. The game will be aired on Comcast Sportsnet and can be streamed live on the NBC Sports Live Extra app.

Tuesday night will be the first time that the Sixers take the court against another team since finishing their 2015-16 season with a 10-72 record on April 13. Although Ben Simmons' debut will have to wait, the excitement of the 2014 draft class suiting up for NBA game action is something we've been waiting for since draft night in 2014. Joel Embiid hasn't played in game action in nearly three years dating back to his last college game in March 1, 2014. After two foot surgeries and what seems like endless amounts of rehab, the 7-foot-2 native from Cameroon is eager to get out there after working so hard to get where he is today.

Sixers head coach Brett Brown mentioned after workouts on Monday that he planned to play Embiid in four and five minute bursts. Per Brian Seltzer of Sixers.com, Brown told the media after practice on Tuesday that Embiid's minutes will all be used in the first half.

“I want to watch him run a floor,” said Brown, “watch him make multiple trips up a floor, in a 76er uniform. I don’t care if it’s pre-season, regular season, whatever. For me personally, that’s something that we’ve all waited for for a while, and there’s just going to be a tremendous amount of pride with what he’s done to be able to do that.”

While we've been limited mostly to workout videos and pictures over the last year with Embiid, it's a different story for fellow 2014 draftee Dario Saric, who will also make his NBA debut this evening.  He averaged 11.8 points and 6.7 rebounds per game for his native Croatia in this year's Olympics before traveling to the states and joining the Sixers for training camp this past week at Stockton University. The Sixers acquired the rights to Saric in a 2013 draft night trade with the Magic that sent Elfrid Payton to Orlando. Brett Brown described Saric and Simmons as 6-foot-10 "do-alls" and that's exactly what Sixers fans should expect from Saric. He may not be as quick as Simmons, but he plays extremely hard, has a good jump shot and is very dedicated on the defensive side of the ball.

“It’s just a pre-season game, but for me, it’s like first NBA game,” Saric told Brian Seltzer of Sixers.com. “It doesn’t matter, [exhibition] or regular game, I’m very excited. I will play [for the] first time against NBA team. This first five, six, seven games will help me a lot to recognize what I will have during the season, what I will have during the first game. I think these six, seven games I must find my rhythm before season starts.”

As both Joel Embiid and Dario Saric make their NBA debuts, tonight will mark Sixers debuts for a handful of players, including veteran guards Jerryd Bayless and Gerald Henderson. Bayless' won't play as he's dealing with a sore left wrist, but Henderson is likely the starter tonight at shooting guard. Henderson averaged 8.7 points per game on 43.9 percent shooting last season with Portland while Bayless averaged 10.4 points and 3.1 assists per game.

With Bayless unable to go, expect newcomer Sergio Rodriguez to get the start at the point in his first NBA since the 2009-10 season. He's played the last six seasons in the Euroleague with Real Madrid. Last year, in 31 games, Rodriguez averaged 12.1 points and 6.1 assists per game. In this year's Olympics, Rodriguez was the backup guard to Ricky Rubio on Spain, but he had some impressive showing, finishing with 8.0 points and 4.8 assists in eight games. Brett Brown said we could even see Nik Stauskas play some point guard with Bayless nursing his injury.

Injuries play a factor for the Sixers once again as they open up the preseason. Dating all the way back to 2012 with Andrew Bynum, Philadelphia has dealt with more than their fair share of injuries. Nerlens Noel missed the 2013-14 season with an ACL injury, Joel Embiid missed two seasons with foot surgeries, Jahlil Okafor missed 29 games last season with a small meniscus tear and now Ben Simmons is expected to miss at least three months with a fracture in his right foot. This evening, Jahlil Okafor will not play as the team wants to get him more court time in practice before he sees game action. Jerryd Bayless has a sore wrist and has been ruled out. Undrafted rookie free agent Cat Barber did not travel with the team due to a hand/wrist injury, according to Jessica Camerato of CSNPhilly.com.

Philadelphia will have a difficult test in the Celtics, who drafted Jaylen Brown third overall and picked up Al Horford in free agency this offseason. Boston will likely start with Isiah Thomas, Avery Bradley, Jae Crowder, Amir Johnson and Al Horford. The Sixers defense will need to be on lockdown with the C's ability to score as Thomas is coming off of a 2015-16 campaign that saw him average 22 points per game with Bradley and Crowder not too far behind at 15.2 ppg and 14.2 ppg.