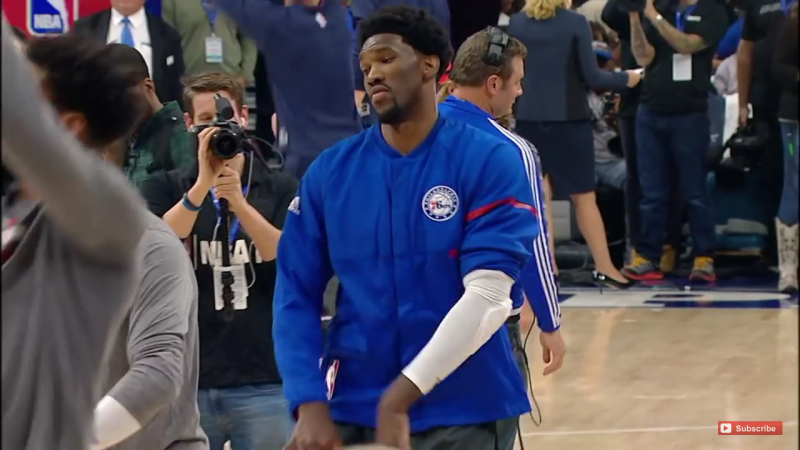 The Sixers find themselves in a matinee this afternoon at Wells Fargo Center, taking on the Atlanta Hawks for the second game of the season. It's hard to find a narrative that doesn't revolve around Joel Embiid right now and he finds himself matched up today with Dwight Howard in his first test against one of the better centers in recent years.

Howard's days as the face of a franchise seem well behind him but he made an excellent first impression on Thursday night in his Hawks debut, putting up eleven points and eighteen rebounds for his first double-double of the season. Between him and Paul Millsap who scored the team high twenty eight points, Atlanta has the makings of a team that could cause their share of headaches to the opposition. They kept it close against the Washington Wizards on Thursday night only to dominate in a 33-19 fourth quarter to win 114-99.

As for the home team, it's obvious wins still aren't going to be easy to come by. Whatever one thinks of Brett Brown's decision to be a bit more liberal with the minutes restrictions on Embiid and Jahlil Okafor, two days off and a home game seemed like an acceptable excuse. They were in the game up until the end against Oklahoma City and it was without a doubt the best Opening Night since they shocked the world and beat the Miami Heat to start the season in 2013.

While Embiid is making the Sixers a hot ticket and rightfully so, there is plenty more to watch out for. Nik Stauskas really shined off the bench on Wednesday with thirteen points after struggling pretty much all throughout last season and in the preseason. Sergio Rodriguez, who also had a pretty forgettable October until the final preseason game, made a pretty nice statement as they try to solve the point guard problem with twelve points and nine assists.

Of course there's Dario Saric who was fairly bad on Wednesday. He got plenty of looks and came up empty though there is plenty of reason to believe that he'll settle in and show some of the upside that we've seen at the Olympics and in preseason. Okafor who is still getting back into the swing of things after his season ending surgery last season should also look to be shaking some of the rust off as his minutes slowly escalate.