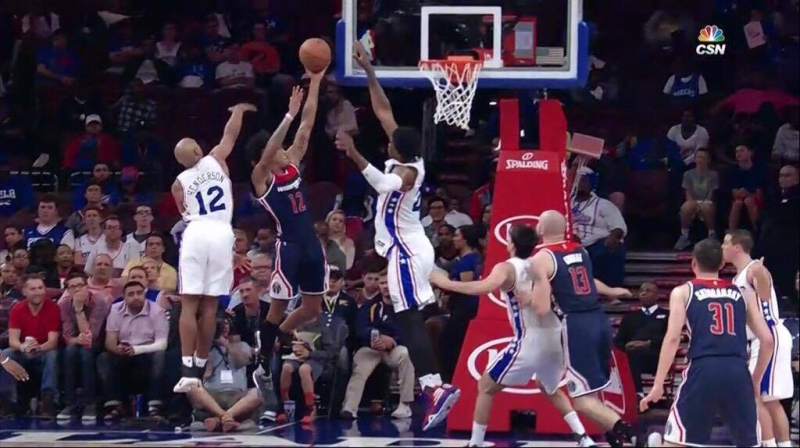 Philadelphia 76ers Opening Night is upon us. Injuries aside, we've waited 853 days since the 2014 NBA Draft to see both Joel Embiid and Dario Saric take the court in regular season action for the Sixers and tonight, that will finally become a reality. This season may still be considered a transition year, but there's no doubting that the level of excitement for Sixers basketball has risen. Tonight, Philadelphia welcomes the new-look Oklahoma City Thunder to the Wells Fargo Center to kick-off their 82-game schedule.

The Sixers preseason gave us a glimpse of the good and the bad, but getting to see Joel Embiid's game both offensively and defensively was impressive. After two years of waiting and two foot surgeries, Embiid finally made his Sixers debut in the preseason this month and didn't disappoint. He averaged 11.4 points and six rebounds per game, playing just under 15 minutes in the teams' seven games, showing progress in each contest. Needless to say, Embiid is antsy to get the opener underway.

This evening, the 7-foot-2 native of Cameroon will be on a 20-minute restriction after starting the preseason at 12. The Sixers capped off their preseason with a 113-110 over the Miami Heat with Embiid scoring 18 points while grabbing nine rebounds in his best performance in the teams' seven exhibition match-ups. Fellow center Jahlil Okafor will have a 12-minute restriction for tonight.

Dario Saric is another guy who will be making his NBA regular season debut. Unlike Embiid, we've been able to see the wide range of Saric's talents whether it be from YouTube highlight reels of his career in Turkey or in the Olympics. It goes without saying that Saric is going to be a strong all-around player. With Ben Simmons on the mend for at least three months, Saric will get the opportunity to make an even quicker transition to the NBA.

"I feel better, I've started to really feel the game," Saric said following Sixers practice on Tuesday. "I know what I can expect in a game […] it's preseason games, but now I have some experience and those games helped me a lot.

Saric mentioned that playing Russell Westbrook is a little weird, because just over the past few years, he was playing against him on Playstation and now, it's real life. He averaged 10.4 points and 4.5 rebounds during the preseason. He led the Sixers in scoring in their preseason finale against the Heat, scoring 19 points on 8-for-14 shooting to go along with seven rebounds.

In addition to Embiid and Saric, 2016 first round pick Timothe Luwawu-Cabarrot is set to make his NBA debut after being selected 24th overall by the Sixers. The native of France showed some good signs in the preseason, averaging 5.0 points and 3.6 rebounds in a reserve role. His best preseason game came in the Sixers blowout loss to the Grizzlies. He scored 13 points on 6-for-10 shooting while also tallying nine boards, five on the offensive end.

“I think, collectively, we start to build the chemistry, we are growing together, and we’re going to get better,” Luwawu-Cabarrot told Brian Seltzer of Sixers.com. “Personally, I feel great.”

On the other side of the court will be the Oklahoma City Thunder, embarking on their first season without Kevin Durant. Last season, they lost to the Warriors, 4-3, in the Western Conference Finals after building a 3-1 lead in the series. In addition to Durant's departure, the Thunder also traded Serge Ibaka to the Magic. Obviously, the focal point of Oklahoma City's offense is Russell Westbrook, who averaged 23.4 points, 10.4 assists ans 7.8 rebounds per game last season.

The Thunder went 3-4 in the preseason and their final game against Denver gave us a look at what their potential lineup could be beyond Westbrook. Starting alongside Russell in the front court will be Victor Oladipo, who came over in the Ibaka trade. Andre Roberson and Steven Adams were each consistently starting in the preseason as well. Adams provides an interesting first test for Joel Embiid as the Thunder big man is most known for his defense and energetic play. Last season for the Thunder, he averaged 8.0 points and 6.7 rebounds per game.

Oklahoma City also has some strong complimentary players off of the bench in guys like Ersan Ilyasova and Enes Kanter, who can help lead the second unit for the Thunder. Rookie Domantas Sabonis will likely be the other starter for OKC. The former Gonzaga product averaged 6.5 points per game in the preseason, playing just under 24 minutes per game.

Check out CSNPhilly's pump-up video for the season:

"March with us on a journey that's about to reveal that the best is yet to come."

Turn your sound on, full screen and get hype for tonight. pic.twitter.com/7hS3CXuoBz