Steve Mason Could Close In on Flyers History this Season

At long last, hockey season is back. Though the Flyers don't start until Friday, the long grind that is the NHL offseason has finally come to an end.

This season, of course, marks the Flyers' 50th Anniversary season, and the team will celebrate its storied history accordingly. Not only has the team unveiled commemorative sweaters, but they'll celebrate several "Heritage Nights," release a new book and meet Pittsburgh alumni for a game, among other celebrations.

One particular Flyer will have the chance to make his own stamp on the franchise as the season rolls along. Steve Mason could find himself as the third-winningest goaltender in franchise history by season's end.

Entering his fourth season as a Flyer -- and third full season -- Mason has amassed 78 wins between the pipes (yes, it certainly doesn't feel like Mason has been in Philadelphia for four years, and he certainly could have a lot more wins if he had a legitimate defense in front of him for that duration). His 78 wins sit at eighth-most in franchise history, and he had passed goaltenders such as Brian Boucher, Doug Favell and Martin Biron last season.

Current GM Ron Hextall holds the high-water mark for wins by Flyers goalies, with 240, and Bernie Parent doesn't trail far behind with 232. Both netminders are Philadelphia hockey royalty, but the list after them gets a bit eclectic. Wayne Stephenson follows with 93, then Roman Cechmanek and Bob Froese each follow with 92 to round out the top-five. The late, great Pelle Lindbergh follows with 87 (a number that, sadly, should absolutely be higher), and Pete Peeters (85) immediately precedes Mason. Simple math tells us that Mason would need 16 wins in order to take sole possession of third place on that list. 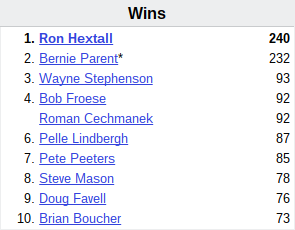 Since his first full season in goal for the Orange in Black, Mason has never finished with fewer than 18 wins (2014-15). The most wins he amassed was 33 in that first season, while he finished with 23 last year. Rounding down, that gives Mason an average of 24 wins per season, so falling in line with that average would cement him at third-place.

It should be noted that wins are not, by any means, the most efficient stat to judge goaltenders from. Any NHLer can tell you that all wins and losses are earned as a unit, particularly in a game like hockey, which is considered by many to be the ultimate team sport. Regardless, wins do help measure how long a goaltender has played for a particular franchise, and how much success (or lack thereof) the franchise experienced with him on board.

Another factor that Mason has to deal with is his injury history -- he's been relegated to less than 55 games over the past two seasons (54 and 51 games, respectively) due to various injuries. It's no surprise that lower-body injuries can be debilitating, especially in an era where goalies are expected to possess world-class athleticism and the hybrid style is ubiquitous. Even if Mason succumbs to the injury bug again this season, 16 wins wouldn't be out of his realm of possibility.

Mason will certainly be motivated by the ever-common "contract year" as well. The three-year deal he signed midway through the 2013-14 campaign will expire this summer, and at 28 years of age, he still has plenty of hockey left in the tank. Surely, he'll want the best numbers that he can get to earn another contract, and with Anthony Stolarz quickly coming up through the Flyers' prospect ranks, his long-term status with the Winged P remains cloudy for now. Even with a long-term extension, getting to No. 2 on the Flyers' all-time list is unlikely. He can get to No. 3 without much of a problem, but narrowing that wins gap between him and the esteemed Parent is a dilemma in and of itself.

When Columbus dealt the former Calder Trophy winner to the Flyers at the 2013 trade deadline, it was seen by many as a move to provide the embattled third-round pick with a change of scenery. Since then, Mason has more than exceeded most expectations in goal for a market that expects nothing but the best out of its goaltenders, and could be rewarded this year with a firm spot behind some of the most illustrious athletes to play in this town. While his status as the Flyers' long-term netminder may hang in the balance, his spot in team history will remain -- fitting for a franchise that will be reflecting on and celebrating its history this season.