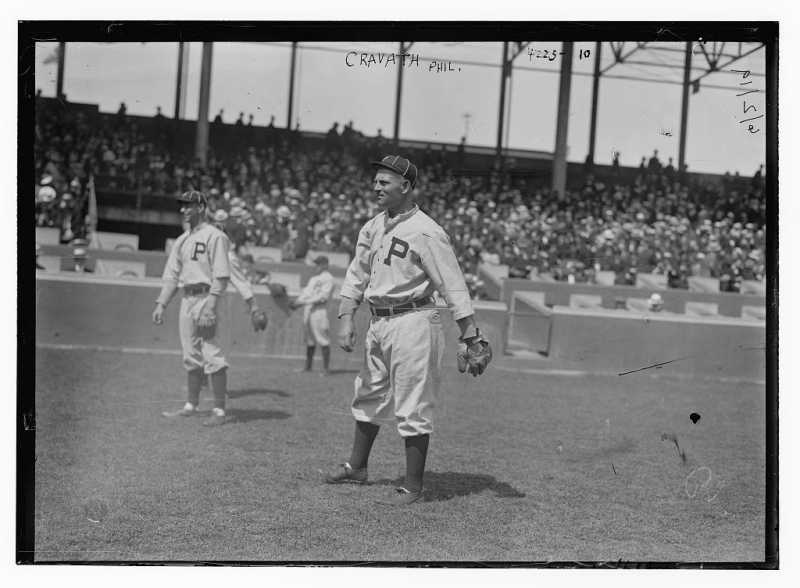 Before Barry Bonds, Roger Maris, and Babe Ruth, there was Clifford "Gavvy" Cravath. Cravath was the premier power hitter of the Deadball Era (pre-1920), and consistently paced the majors in home runs. He once said that "short singles are like left-hand jabs in the boxing ring, but a home run is a knock-out punch."

Cravath's journey to Philadelphia and ultimate stardom was an unusual one. He played in the minor league Pacific Coast League for several seasons before the Boston Red Sox signed him in 1907. In 1909, he traded his red sanitaries for white ones when he was traded from Boston to the Chicago White Sox. Cravath barely had time to unpack his suitcase when the White Sox traded him later that season to the miserable Washington Senators, whose manager Joe Cantillon owned the Minneapolis Millers of the minor league American Association. After going hitless in six at-bats in Washington, Cantillon shipped Cravath west to Minneapolis.

Cravath thrived at the Millers' cozy bandbox from 1909-1911, regularly hitting over .300 and becoming one of the league's more prominent power hitters (he hit .327 with 29 home runs in 1911). Unfortunately for Gavvy, the aged reserve clause bound him to the Washington franchise. However, after the 1911 season, the Millers accidentally left out the word "not" in telegram to Pittsburgh and this allowed Cravath's contract to be purchased by another major league team. In 1912, at the age of 31, Cravath was purchased by the Phillies for $9,000. Cravath helped to power the Phillies into a pennant chase in 1913 and into the 1915 World Series.

After his career ended, the former home run champion managed in the minor leagues for a few seasons before returning home to Laguna Beach, Ca. In 1927, he was elected Judge, a profession he retained until his death in 1963. Cravath lacked any formal legal training, and instead based his decisions on the sportsmanship he learned during his baseball career.

The 1915 Phillies were the best team that the franchise fielded between 1883 and 1949. In 150 games, Cravath totaled 115 RBI and walked 86 times. He led the league in OBP, slugging, OPS, OPS+ and total bases. Additionally, his 24 home runs set a single season major league record and were more than 12 of the other 15 major league teams combined.

Cravath finished his career in 1920 as the era's premier power hitter. He led the majors in home runs in six of his nine seasons in Philadelphia, and his 119 career home runs was a major league record record that stood until Babe Ruth passed the total in 1921, and a National League record until fellow Phillie Cy Williams passed him in 1923.

In 1914, Cravath went on a unique home run tear. He hit a home run off of Brooklyn's Pat Ragan in the first game of a double header at Baker Bowl on September 7, 1914. In the second game, he hit another home run off of Charlie Schmutz.

Later, on September 26, Cravath repeated the feat as he hit a home run off of Cincinnati's Red Ames in game one of a double header and one off of King Lear in game two.

In total, Cravath hit eight of his league leading 19 home runs in the month of September 1914.

First, single season WAR is a primary factor in our rankings. According to WAR's calculations, 2+ WAR is considered a starter, 5+ WAR is All-Star caliber, and 8+ WAR is MVP level. We totaled the number of seasons that a player performed at a 2+ WAR, 5+ WAR, and 8+ WAR level and assigned a set point value for each category, (+1), (+3), and (+5) respectively. For example, in 1980, Mike Schmidt complied an 8.8 WAR. This was counted as a 2+ WAR season, a 5+ WAR season, and an 8+ WAR season. So, for 1980 alone, Mike Schmidt earned (9) points for WAR.
Second, we assigned a point value for amount of years spent with the Phillies. In order to be considered for this list, a player must have been with the organization for a minimum of (5) years.
Next, we assigned point values for being among the top 25 in particular statistical categories, such as batting average, hits, doubles, triples, RBI, home runs, and OPS for hitters, and ERA, Wins, and WPA (wins probability added) for pitchers.
Finally, all statistical categories were totaled up using our point based system and ranked accordingly, with myself and managing editor Tim Kelly reserving the right to move players up the list, within reason. An explanation of why a player is ranked in a certain spot will be provided, as will an overall score breakdo