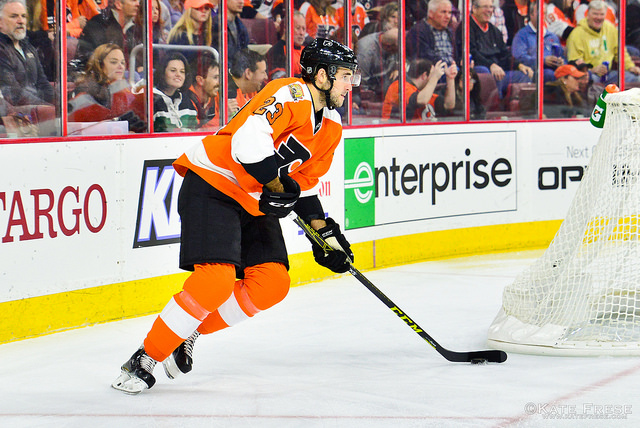 One of the biggest surprises of the early season for the Flyers has been the play of 26-year-old blueliner Brandon Manning.

The third-year Flyer was thought to be the odd man out entering training camp, especially if Ivan Provorov was able to secure a place on the team. He hurt his shoulder early on in camp, which made it even more difficult for him to try to secure a full-time roster spot.

The suspension of Radko Gudas and injury to Michael Del Zotto guaranteed Manning would play the first six games while Gudas served his suspension.

However, Manning surprised everyone with his improved play in those six games and when Gudas returned, it was Andrew MacDonald who was the healthy scratch, not Manning. Since then, MacDonald and Nick Schultz have shared the seventh defenseman role while Manning has been a nightly regular.

Dave Hakstol has been generous with his praise for Manning’s play. He commented recently that Manning has grown his game while continuing the things he did well at the end of last season.

He and Gudas were the Flyers best shutdown pair to end the regular season and also in the first-round series against the Washington Capitals.

So far this season, he has built on that foundation and has been more aggressive pinching in on plays in the Flyers zone. He has also shown more confident play in both ends of the ice. Manning has as many points in 10 games as he did in all of the 2015-16 season.

Manning has two goals and five assists for seven points, just one point behind Mark Streit for the most points among Flyers blueliners. He leads the Flyers in plus-minus with a plus-5 rating. He is tied with Wayne Simmonds for the team lead in hits at 29. He has four fewer blocks than MacDonald for the team lead at 18. Surprisingly, he only has one fewer shot on goal than Streit, both of whom trail Shayne Gostisbehere for the lead among defensemen.

Manning leads all defensemen for the Flyers with 2.44 points/60 minutes of ice time, nearly a full half point ahead of Provorov.  He is also third in the NHL among blueliners in that category, behind only Brent Burns and Dougie Hamilton.

Manning also leads all Flyers defensemen in goals against per 60 minutes at 1.95. Manning tallies the most points even strength per 60 minutes and is on the ice for the fewest goals against. Manning has the lowest offensive zone starts among Flyers blueliners a meager 23 percent. He also has the highest share of defensive zone starts at 31 percent.

Manning is basically tied with Provorov for the second best CF% at 52 percent only behind Streit at 54.4 percent. They are the only three Flyers defensemen who have a CF% above 50 percent.

If Manning can continue to grow his game while building on his existing strengths, it is likely that he will remain in the lineup even when Del Zotto returns from his injury. He could also make things interesting going forward as some of the recent draft picks on defense become NHL ready.

"Manning has as many points in 10 games as he did in all of the 2015-16 season." Impressive! Hope he does continue to prove vital to the CF mix. Solid write up!