Brett Brown: 3 Reasons Why He Should Keep His Job 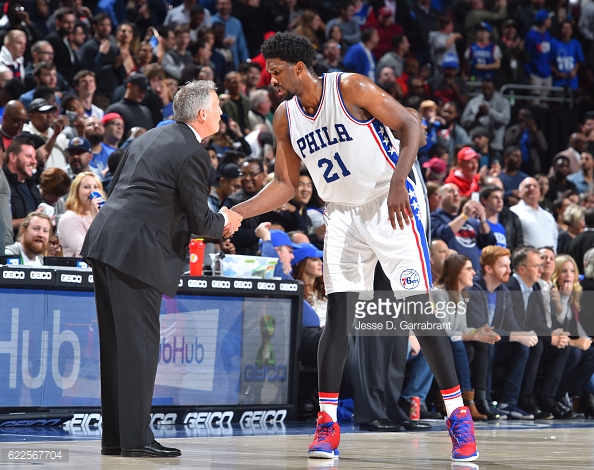 As of late there has been a lot of chatter centered on Brett Brown’s job security or lack thereof. I’m here to tell you that it’s in our best interest to let him see the end of the season regardless. Here are a few reasons as to why.

His most tenured player is Hollis Thompson for crying out loud. He’s coached 52 different players during his tenure as 76ers HC (not including the players on his current roster) and only 11 players still remain in the NBA. With the revolving door that has become the 76ers roster, I for one, find it foolish to call for Brown’s job as soon as you provide him with decent players who will finally be around for more than one year.

Who would replace him?

Nothing good will come from firing him midseason. Nothing. For one, Jim Obrien would be next in line to finish as Interim HC and he is atrocious. He’s been known to not be the most well liked guy in the locker room and is undoubtedly not what’s best for these young impressionable professionals.  Secondly, there aren’t any coaches on the market who are worth shopping around for. Lastly, it will destroy what little continuity and chemistry the team currently has. Say what you will about Brett Brown, he gets these young guys to compete. In my estimation I think he does a damn good job at maximizing the potential of his players, albeit, there has never been much potential to maximize. He’s a player’s coach, you can tell these guys love and respect him as not only there coach but as a man. Whether you want to admit it or not, this team is the best team he’s had in almost three or so years. If you want to attribute what little success he is having to Joel Embiid and the other new additions then have it but you can’t, in the same breath bash Brown for the last two years either given there was absolutely nothing to work with.

I wholeheartedly believed that given the additions Joel Embiid, Ben Simmons, Dario Saric, Jerryd Bayless, Gerald Henderson and Sergio Rodriguez that this team would be much more competitive when compared to last year’s team. I still believe that but that being said you cannot hold what has taken place at the end of games squarely on Brett Brown’s shoulders. When your injury report consists of Ben Simmons (foot), Okafor/Embiid (mins restrictions), Noel (knee), Bayless (wrist) what do you really expect from the guy? Play calls are only as good as the players executing said play calls. Brown gets unfair criticism, we should be thanking our lucky stars he is even able to get what remains of the roster to compete and be in the game late in the 4th quarter.

I just find it amusing how a fan base can praise Hinkie and then bash Brown. Brown didn’t draft three centers in consecutive years, he just coached them. Can’t hold ones feet to the fire and praise the one who lit it ablaze. Chanting “Trust the Process” and then not trusting it is kind of hypocritical of sorts, no?  All I’m saying is that we should wait to cast our judgement until he has a healthy roster, it’s hard for me to say whether he’s a bad coach, the players aren’t executing or if he’s simply just trying to dumb down the game in late game situations due to the youth. We have a copious amount of time to figure this out. The process, trust it.