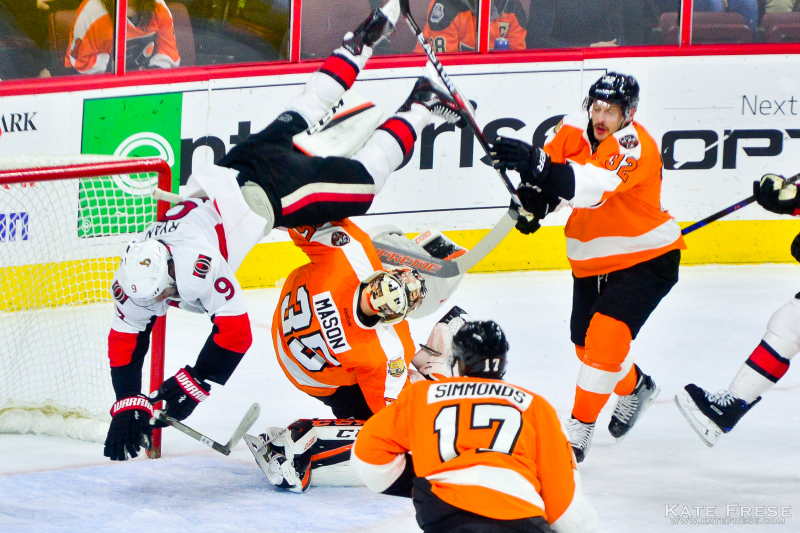 In a very sloppy game with defensive turnovers and offensive miscues to spare, the Ottawa Senators overcame a late Philadelphia Flyers lead to claim a 3-2 shootout win on Tuesday night at Wells Fargo Center.

Kyle Turris poached his eighth goal of the second with less than two minutes left in the third period on a quick wraparound opportunity to tie the game at two. Then after a long shootout, Senators captain Erik Karlsson beat Steve Mason to give Ottawa the victory.

It appeared as though the Flyers would head to a 2-1 victory thanks in large part to the play of Mason.

Throughout the contest, Mason was called upon to make some spectacular saves. Mason expertly poke checked a cross-crease pass on a 2-on-0 opportunity in the overtime, made several dazzling glove saves in the shootout and twice denied Jean-Gabriel Pageau -- once from in front of his crease during the second period and another on a breakaway in the opening frame -- to piece together an impressive effort.

However, this game will leave some wondering about the save Mason didn't make. Turris' game-tying goal saw Mason moving from side to side slowly which allowed Turris to swiftly swing around the net and tie the game.

Mason's play may have been enough, though, if not for some sloppy play. Both teams were prone to defensive giveaways the which resulted in goals.

The Flyers took advantage of Ottawa's turnovers to hem the Senators in their own zone during the latter half of the second period to give them a go-ahead goal.

After an offensive zone faceoff, Michael Raffl broke the 1-1 tie at the 6:42 mark after Craig Anderson denied a Dale Weise shot from the boards. Raffl collected the rebound and in front of the Ottawa goaltender and deposited it for his second goal of the season.

Mark Stone tied the game earlier in the period after a series of Flyers mishaps. He was also denied a chance for a second tying goal after Radko Gudas' excellent backcheck disrupted the Ottawa rush without committing an infraction.

Cousins was the beneficiary of two Ottawa turnovers. He was denied early on in the first with a blocker save by Anderson. However, Cousins would bury his second chance for his second goal of the season with 14:46 left in the first period.

The Flyers were also guilty of offensive miscues including some missed shot opportunities and Travis Konecny sending an odd man rush pass behind Ivan Provorov. Philadelphia also failed to convert on four power plays particularly 4:50 of power play time in the opening half of the third period.

The Orange and Black will look to get back in the win column on Thursday for a 7 p.m. rendezvous with the Winnipeg Jets at the Wells Fargo Center.