Perhaps the most meaningless stat from the Chip Kelly era proved to be the most valuable for the Eagles on Sunday and helped vault them back into the win.

The Eagles simply controlled the game by controlling the ball. And keeping a powerful Atlanta offense off the field was the recipe for victory.

Let's get to the breakdown.

For years, we were told it didn't matter. Time of possession was an overrated stat according to Chip Kelly. It meant nothing and was just a number teams without high-powered offenses fell back on to feel better about their sub-par units.

But yesterday, with his team's back against the wall, Doug Pederson used time of possession as a weapon, stifling the NFL's top offense and putting the Eagles back into the win column. It was a win in dominant fashion, even if only one statistic says so.

The headlines, however, will praise Jim Schwartz and his defense, rave about how they held the Atlanta Falcons to their season-low in points, yards, first downs and touchdowns. Lost in that applause will be how Carson Wentz and company held on to the ball for almost 40 minutes and how the Falcons offense was still effective during their time on the field.

The fact is, the Falcons averaged 6.3 yards per play, still much less than the 6.8 they were averaging heading into the game, but it is still higher than the next best team in the league. Teams have averaged 6.3 yards per play or better 59 times this season. Of those 59 games, teams have lost just 17 and the 15 points the Falcons put up yesterday is lower than any of those performances.

"We understood this was a great offense," Malcolm Jenkins told Philly.com. "They've scored on pretty much everybody. We knew we'd have to eliminate those big plays for touchdowns. And when they do get into the red zone, we need to get stops and hold them to field goals. For the majority of the game, we did that."

The Falcons scored just one touchdown and it was of the big-play variety, 76 yards from Matt Ryan to Taylor Gabriel, but they bent without breaking for the other 20 minutes they were on the field, holding the Falcons to just one red zone trip and three field goals. But perhaps the best thing Jim Schwartz's unit did was get off the field, Atlanta converted just 18% of their third down plays.

But the Eagles offense's ability to stay on the field was just as impressive. All day they stayed ahead of the sticks and, of their 25 first downs, 12 came on the ground and 12 came through the air.

The Eagles pretty much clipped the Falcons' wings before they could even get off the ground. Keeping Ryan, Julio Jones and DeVonta Freeman in check is no small order, but the ability to keep them off the field and force them to try to play catch up the entire game took Atlanta out of their gameplan and they never found their groove.

That is the power of TOP. That is why ball control is important, especially for a team who is severely outmatched on one side of the ball.

That's why Kelly is no longer here.

Did Not Play: Allen Barbre (hamstring)

Nolan Carroll: Carroll left the game at the end of the first half with a concussion and was never able to make it through protocol and return to the game. In his absence, the Eagles were forced to play a hobbled Leodis McKelvin who struggled for much of his time on the field, but came up big when it mattered most, intercepting Ryan in the final minutes, icing the game.

Carroll has been the Eagles best cornerback this season and if he's lost for an extended period of time, it will be a huge blow to an already thin secondary. He may not be ready for this week's game against the Seattle Seahawks, but the sooner the Eagles can get him back, the better, especially with Aaron Rodgers and A.J. Green looming ahead in these next few weeks.

80: Eagles wide receivers combined for just 80 receiving yards yesterday. For comparison, that is 55 yards less than Julio Jones put up. In fact, only Jordan Matthews and Nelson Agholor were even targeted and the former had 73 yards and the latter had just seven. Maybe it was just a part of the gameplan, but the Falcons secondary was banged up and the Eagles just couldn't take advantage of that. It's officially time to hit the panic button on these receivers because if they couldn't put up numbers against this secondary, there is no hope for this unit.

5.5: Luckily for the Eagles, their rushing game dominated all day long. Jason Kelce had his best game of the year and the Eagles averaged 5.5 yards per carry as a result. Ryan Mathews had 109 yards and Wendell Smallwood had 7o yards on 13 carries. For a team that was averaging just four yards per carry heading into Sunday, yesterday's performance was certainly a welcome surprise. If the Eagles can run with this kind of proficiency moving forward, it will make things a lot easier for Wentz and the struggling wide receivers.

126: Despite the Eagles playing most of the game close to the vest, they still out-gained the NFL's top-ranked offense by 126 yards. That's something Wentz and the rest of the offense can hang their hats on for this upcoming week as they prepare for the Seahawks defense.

damn just realized that Falcons-Eagles is a matchup of Matthew Ryan and Ryan Mathews.

Jordan Matthews: "I had to get a new facemask after the hit. It was bent in and [unusable]"

Remember kids, this is apparently a legal hit in the NFL: 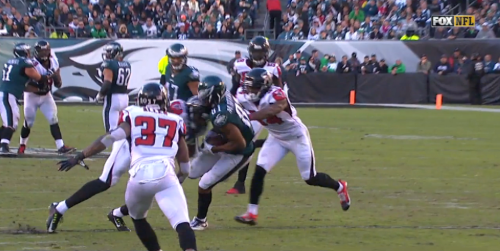 Don't call it a comeback. For the first time all year, Mathews eclipsed 100 yards and set the tone for the Eagles all day on offense. After his fumble issues and Darren Sproles' emergence as the team's top weapon, it seemed like Mathews was on his way to being a short yardage, situational back. Instead, he got 19 carries, scored both of the Eagles touchdowns and averaged 6.6 yards per touch on the day. Mathews remains a talented running back, and when he plays inspired football, the results are spectacular. The issue remains, however, can he stay healthy and can he hold on to the football?

It was not that long ago that Kendricks seemed to be perhaps the worst defensive player on the Eagles roster. He was a liability against the run and the pass and was only playing in base situations. But yesterday he had a quarterback hit, a pass defensed and was fourth on the Eagles in tackles. He still isn't the playmaker we watched in 2013 or 2014, but he's starting to get back to that level. Maybe his early season struggles were health related? The evidence is certainly pointing in that direction.

1. After two weeks of fans pleading for the Eagles to limit Sproles' workload, it was interesting to see some people upset with how sparingly the running back was used, especially in the first half. With Mathews and Smallwood running the ball effectively, there was no need to change things up, and on top of that, Sproles had eight catches in the game, tops among Eagles' receivers. In total, he had 10 touches for 76 yards. Not a bad day, and certainly a performance that is more in line with the workload that is appropriate of someone his size.

2. I'm sure some people found yesterday's game boring, but I really enjoyed watching the Eagles play a throwback brand of football that is so underutilized in the NFL. Yes, you have to move the ball down the field to win and yes, it is important to throw some deep shots to keep the defense honest, but the Eagles just kept punching the Falcons in the mouth again and again, and there was nothing Atlanta could do about it. Sure, there weren't many explosive plays or highlight reel catches, but that physical brand of football is one that I think this city could really get behind and appreciate.

3. Now, it's incredibly early to start looking this far ahead, but how great is that Vikings pick looking right now? Since the Eagles handed Minnesota their first loss in Week 7, the Vikings just haven't been able to recover and they are now riding a four-game skid with no end in sight. Their offensive line is terrible. Their running backs are terrible. Their quarterback is Sam Bradford, who continues to put up empty numbers. It's not like the Vikings are going to finish the season 5-11 and the Eagles will have themselves a top-10 pick, but the value of a pick in the mid-teens is tremendous, especially when you consider the Eagles gave up a spare part to get it.

The Eagles will head to the Emerald City this week to play Russell Wilson and the Seattle Seahawks. This matchup is a result of the Eagles winning their Week 17 game against the New York Giants a season ago. Had they lost, the Eagles would have traveled to London and played the Los Angeles Rams.

But, to the victors go the spoils, so the Eagles will have to square off with the Seahawks, who are coming off a hard-fought win over the New England Patriots. Seattle seems to have everything coming together and will be a tough order for the Eagles, especially on the road, where the Eagles are just 1-4 this season.