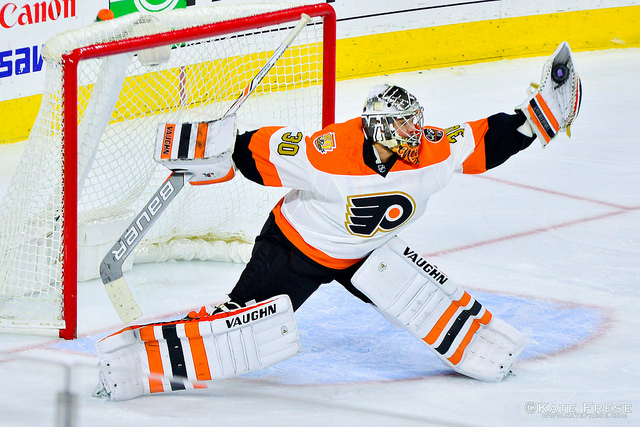 By Kevin Durso and Brent Baldwin

The Flyers season is nearing the quarter mark, so we decided to dive into the mailbag and take a look at some fan questions.

What happened to Steve Mason and Michal Neuvirth's goaltending? - Beauregard

Up until Tuesday's game against Detroit, the Flyers really had not had a clean game from a goaltender all season. Steve Mason carried the Flyers into the playoffs during the second half of last season. Michal Neuvirth nearly helped them pull off a comeback in the series against Washington.

So far, neither has been very good and Neuvirth has allowed bad goals in four straight starts. Mason didn't get the win on Tuesday, but made some good stops down the stretch to help get the game into overtime. Hopefully, that's a start for Mason to get on a roll, mainly because the Flyers are looking for one to emerge and haven't gotten the production necessary out of either.

How's Anthony Stolarz progress coming along and can he make the leap to the NHL? - Stevil

Very much so. If not for him, the Phantoms wouldn't be in the position they are. In Saturday's win over Springfield, he single-handedly kept Lehigh Valley in the game in the first period, stopping 21 of 22 shots. Several of those saves were of the 10-bell variety. He is playing so well, that it would not surprise me if Alex Lyon were sent to Reading to get some playing time. Stolarz has claimed the crease, and shows no intention of giving it up.
In terms of the NHL portion of your question, he's obviously blocked by Mason and Neuvirth, and barring injury, finding him playing time would be just about impossible. But you can bet that if a trade is made, he may find himself permanently in a Flyers sweater.
What's going on with Nick Cousins playing time? - Jeff
Nick Cousins appears to be getting the same treatment some Flyers veterans got last season as Dave Hakstol worked on finding the right combinations. Matt Read, Brayden Schenn and Michael Del Zotto each sat out games while Hakstol worked to find fits, but eventually settled back into the lineup.
In Cousins case, sitting out the last few games was a bit baffling given the energy level he can bring to a game, even if Dale Weise and Roman Lyubimov had some extra jump and were developing a nice chemistry on their assigned lines. But after Scott Laughton and Lyubimov were sent down to the Phantoms, a spot has opened up for Cousins and he should start getting back into the lineup on a regular basis.