Eagles Flyers Phillies Sixers About Us Write For Us
Top 25 Phillies of All-Time: No. 9 - Chuck Klein
Week 12 NFL Picks 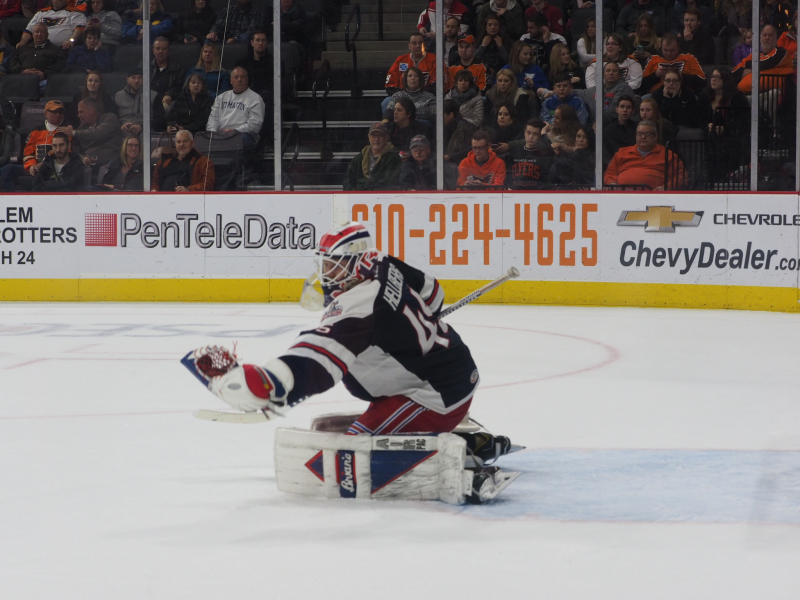 It was a battle of first place and last place on Saturday in Allentown, as the Phantoms hosted the Hartford Wolf Pack.

Hartford was looking for just their sixth with of the season, and thanks to strong play from Magnus Hellberg and their defense, they got it by beating the Phantoms, 3-1.

Hartford came out to start with a purpose, scoring less than a minute into the game. On a rush, Nicklas Jensen was able to get in behind the Phantoms defense and create a scoring chance for himself. Alex Lyon attempted a poke check to end the play, but Jensen pulled the puck back and skated right around Lyon, tapping the puck into the wide open net that awaited him.

Lehigh Valley did not look like the strong team they have been to this point this year during the first, as Hartford controlled most of the play. Two power-play opportunities would help the Phantoms gain the shots on goal advantage, but they would be unable to score. On the first power play, the Phantoms had plenty of chances but Hellberg stood on his head to keep his team in the lead.

After the penalty expired, Hartford skated up ice and got a cycle going in the Phantoms end. A point shot from Ryan Graves made its way through to Lyon, who thought he had control of the puck between his arm and his body. The puck squeaked through however, and was laying in the blue paint, when Matt Carey found the puck and slid it in to extend the Wolf Pack lead.

15 seconds of the last man advantage carried over into the second, but it was not enough time for the Phantoms to score. Hartford would put the Phantoms 14th-ranked penalty kill to work for the first time on the evening, and would cash in on their chance. Mat Bodie ripped a shot from the point that got tipped past Lyon by Chris Brown to make it a 3-0 lead for the Wolf Pack at 6:22 of the second.

Lehigh Valley stepped up their game from there, throwing everything they could toward Hellberg. At one point, the Phantoms had three straight odd-man rushes, but were unable to cash in.

Finally, on a broken play, Greg Carey found a puck that had been poked off the stick of Chris Conner and saucered a pass cross-ice to Sam Morin, who wound up and unleashed a slap shot that blew passed Hellberg. The goal, Morin's first of the year, made the game 3-1 going into the third.

The hitting and intensity picked up in the third, but Hartford continued to dominate play. The Phantoms could not seem to get anything going with sloppy passes and broken plays not able to help them get back into the game. Even another man-advantage opportunity went wasted, and the game remained at 3-1 past the half way point of the period.

Hartford's defense kept the Phantoms to the outside, only giving them odd angle and point shots, making it easier on Hellberg to melt everything down. The Phantoms would make one last attempt to tie the game, pulling Lyon with 2:28 left in the third. Despite a flurry of chances, Lehigh Valley was held off the board until the final buzzer sounded.

Hellberg and the Wolf Pack defense were the difference-makers in the game, holding the Phantoms to just one goal for only the second time this season. Hellberg's 30 saves gave the Wolf Pack only their second regulation win on the season, the other coming on their opening night.

The 3-1 loss brings the Phantoms record to 8-2 in their last 10 games. Lehigh Valley returns to the ice with four games next week, starting with a trip to Toronto to face the Marlies on Tuesday night.

Captain Colin McDonald on what the team can take out of the loss: "Work ethic was there, it was just one of those games. For whatever reason we just didn't have it tonight, and that's gonna happen. We've been on a pretty good run here, but were not gonna win every game. We just have to learn from this, we've been talking about it all year. Good teams don't lose back to back games. So we just have to shift our focus to Toronto. We know they're gonna be a lot more hungry that game from the last time we played them, so it's gonna be a good test for us. We're not gonna surprise anyone anymore. We're gonna get every teams best when we play them. We just have to learn from it."

Head coach Scott Gordon on what frustrated him about tonight's game: "I think the frustrating part is that we didn't make it harder for them. Particularly our power play. We just want to hold onto the puck. We don't want to shoot the puck. We're looking for the perfect play. We have defenseman that have great shots who don't want to use them on the power play. We saw it tonight, we do a great job of killing the penalty, we don't give up a shot, one point shot and it's in the back of our net. That's part of how you generate offense on your power play. It's not gonna be tic-tac-toe. A lot of times those shots lead to secondary and third opportunities and that's one area we've stopped generating offense off is shots out by the flanks or up top. Our power play has basically done nothing for three maybe four games now. We had that really good game in Providence where we had three power play goals, but even then they weren't great power plays. We got a couple lucky bounces and buried some chances. We've gotta do a much better job, we're spending too much time with the puck on the yellow along the boards instead of allowing ourselves to take advantage of our break out. We shouldn't be dumping the puck, we shouldn't be throwing the pucks around the boards unless it's absolutely necessary. And we've been doing that numerous times in the last four games. We have poor recognition of when we've got time and when we don't. We've just been sloppy in that area."