Eagles Flyers Phillies Sixers Union About Us Write For Us
Previous month:
October 2016
Next month:
December 2016

For Phillies, timing not right for Andrew McCutchen

It appears the Pittsburgh Pirates are open for business on former National League MVP Andrew McCutchen, which naturally has led to some suggesting that the team across the state, the Philadelphia Phillies, should aggressively pursue the 30-year-old.

While having interest in a former MVP who still age-wise should be very much in his prime makes sense for a team that hopes to become a contender over the next few seasons, the timing on McCutchen may not make sense for the Phillies.

Continue reading "For Phillies, timing not right for Andrew McCutchen" » 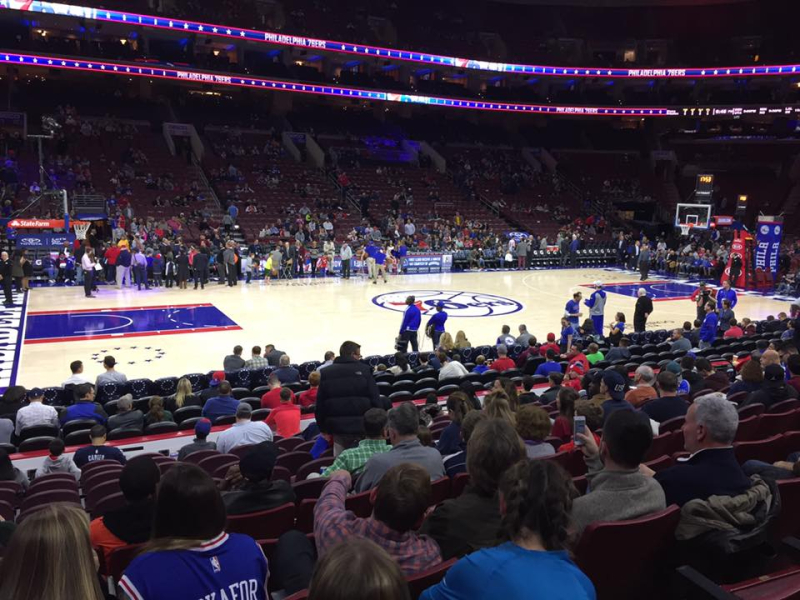 The Philadelphia 76ers and Sacramento Kings match-up scheduled for Wednesday night in Philadelphia has been postponed due to an unsafe playing surface. The floor was covered with moisture and according to Keith Pompey of the Philadelphia Inquirer, the moisture was a result of the high temperature outside and the temperature inside the arena being 75 degrees earlier. Pompey went on to report that someone in the operations department "dropped the ball" and didn't turn the temperature down like they normally do.

Here's the official statement from the Sixers:

Philadelphia 76ers center Joel Embiid had a CT scan earlier this week and and according to the 7-foot-2 native of Cameroon, it "looked great". Following the results, the Sixers have decided to up Embiid's minutes from 24 to 28 beginning tonight against the Sacramento Kings.

A few weeks ago, we learned from Brett Brown that Embiid's 24-minute restriction was likely to last until at least Christmas before being re-evaluated. Despite playing with a restriction, Embiid has still found ways to make a huge impact on the Sixers, averaging 18.7 points, 7.8 rebounds and 2.4 blocks per game. 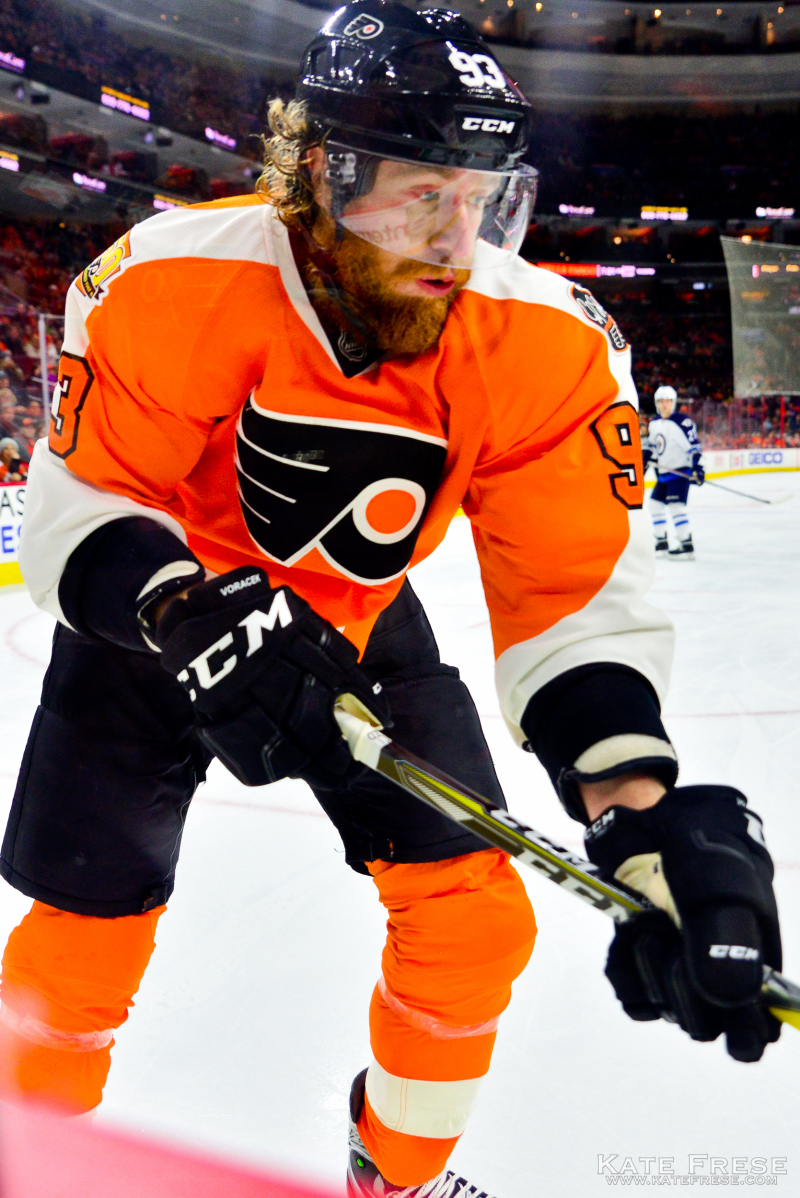 It isn’t uncommon for the boos to be heard at any sporting event, especially in Philadelphia. But lately, it’s another similar sound that has been getting some attention.

If you've been to a Flyers game at Wells Fargo Center this season or recently watched a game on television, you may have heard the crowd randomly doing their best Ric Flair and "wooing" throughout the game.

Well, it turns out the Flyers aren't fans of that.

Good news from the Philadelphia Phillies camp as pitcher Zach Eflin is headed in the right direction on the road to recovery from injury. Eflin had surgery on his right knee on August 19, and on his left knee on September 30, which ended his season prematurely.

Eflin has had problems with his knees since he was a child, but it was unfortunate to suffer another injury during his first season with the big-league club.

Luckily, it gives him enough time to prepare for the upcoming season, as he has already started rehabbing.

According to his tweet, Eflin seems to have started his throwing on a mound again, and it's good to hear he's "pain-free."

The Philadelphia 76ers (4-14) return home after a short trip to Toronto for a match-up against the Sacramento Kings (7-11) tonight at 7:00 p.m.  The Sixers are looking to snap a four-game losing streak against a Kings team that has only won three games on the road this season.

Joel Embiid returns to the lineup tonight after playing on Sunday against Cleveland and staying behind on the Sixers trip to Toronto. The big news for Embiid is that after a CT scan earlier in the week, his minutes have been increased to 28.

Embiid is expected to see court time with fellow big man Jahlil Okafor tonight with the Kings running with two centers on a regular basis. Meanwhile, Nerlens Noel is getting closer to a return as he heads to the D-League to continue his rehab. Point guard Jerryd Bayless is out again tonight and has been listed as day-to-day moving forward with continuing left wrist issues.

While Chase Utley and Ryan Howard may have at times topped him in terms of individual dominance, former Philadelphia Phillies shortstop Jimmy Rollins was the consistently great catalyst behind perhaps the greatest run in franchise history. Rollins won a league MVP, made four All-Star teams, was one of the best fielding shortstops of his generation and when you add in his 470 career stolen bases, "J-Roll" may be the most likely player synonymous with the Phillies from his era to garner serious consideration for the Baseball Hall of Fame some day.

Those accolades, among other things, are why Rollins came in at No. 7 on Sports Talk Philly's countdown of the greatest Phillies of all-time.

The Phillies continued adding administrative talent to the organization on Wednesday afternoon. The Phillies announced that they have hired former Twins general manager Terry Ryan.  Ryan will serve as a special assignment scout for the Phillies organization.

"I have known Terry for more than a decade and have enormous respect for all that he accomplished during his tenure with the Twins," said Klentak. "Terry's work ethic, loyalty and track record as a talent evaluator are simply unparalleled in our game."

However, the roots run much larger with Phillies president Andy MacPhail.

MacPhail and Ryan worked together in the Minnesota Twins organization in the late 1980s and early 1990s.   After serving for six years as the scouting director of the Twins, MacPhail promoted Ryan to vice president and player personnel director.   Ryan then replaced MacPhail when MacPhail left the Twins for the Chicago Cubs in 1994.

After two days to contemplate the controversial decision, Eagles' coach Doug Pederson admits he shouldn't have challenged the Packers' two-yard completion late in the third quarter of Monday night's 27-13 loss.

"That second [challenge], I probably would've kept it," Pederson said. "The thing was too, where they were on the field. At that point, just trying to, hey, lets go second-and-ten over second-and-eight, try to keep them back just a little bit. I was trying to play all that in my head at the same time. That's part of going back to the process of self-evaluation, making those decisions, I'd probably hang onto that and keep it for a situation that didn't happen in the game."

Philadelphia will look to bounce back from Monday's disappointing loss when they take on the 3-7-1 Cincinnati Bengals at Paul Brown Stadium this weekend. Marvin Lewis' Bengals have taken a giant step back in 2016, winning just one win of their last seven contests.

Pederson has yet to determine if wideout Nelson Agholor will be reactivated on Sunday after being sidelined against Green Bay, but the first-year coach did elaborate on the reasoning behind his decision to sit the 2015 first-round pick.

"Seeing the game differently, not having the pressure of performing," Pederson said. "On service team, we hold up a card that says run this offense or run this defense. Receivers run it, and sometimes they make great plays. You're scratching your head going, wow, that was a great route, great catch. So the connection there is, play like you're playing as if it were a service team rep, where you're not thinking, you're just going out and reacting to what the defense presents. It's easier said than done obviously, but that's how Nelson needs to attack this. Just play like you're playing the service team."

No. 2 overall pick Carson Wentz's rookie season hasn't gone exactly as Pederson would've hoped. After a stellar first four outings, completing over 67 percent of his passes with seven touchdowns compared to just one interception, the former North Dakota State gunslinger has now been picked off six times in the last six games.

Despite a severe statistical regression, Pederson believes Wentz's throwing mechanics are ahead of the curve.

"He's definitely worked on [his mechanics]," Pederson said. "You saw early in the game, when he steps into throws, how accurate and how smooth the ball comes out of his hand. On [the interception], he had some pressure, it wasn't a clean rush but the fact that he had a bull rush in his face, so naturally you're gonna end up throwing high and off your back foot. It was a little bit of mechanics, but it was also the rush that made that ball go high."

"I definitely think [he's] in front of the curve. It's still a work in progress. If you fast-forward to this upcoming offseason, we'll get a chance to really work with him and focus more on his mechanics and obviously the details of that. He's working on it every day, and it's definitely improved. You saw it early in the game, and really throughout the game. We're still working on his eyes, progression of plays, understanding the offense. It's small strides, but it's going in the right direction."

Monday night's loss to a reeling Packers team was a continuation of an eight-game slide for the Eagles. The recent defeat, which was their first at home this season, has essentially taken them out of the playoff picture.

Barring an unforeseen five-game win streak to conclude the regular season, the organization will be enduring another playoff-less campaign, its fifth in six seasons.