Mason leads Flyers to shoot out victory over Bruins 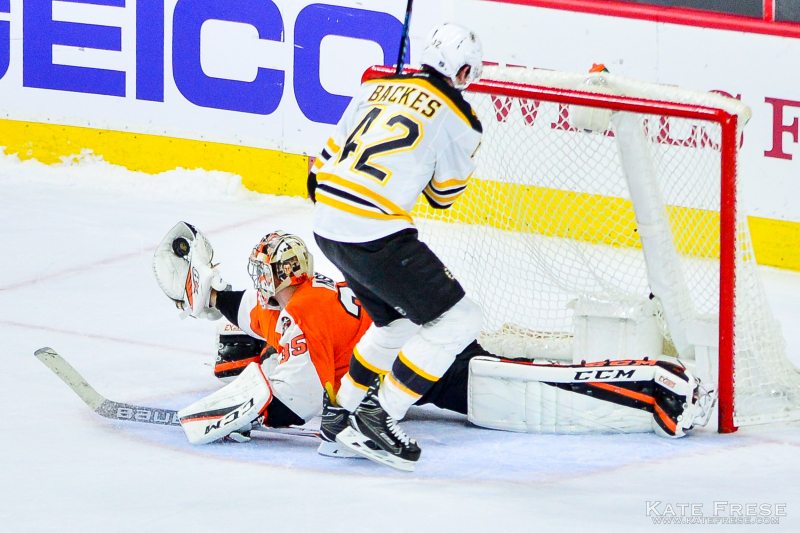 Steve Mason played by far his best game of the season Tuesday night against the Bruins. The Flyers net minder made 45 saves on 47 Boston shots during regulation and overtime. The Flyers built a 2-0 lead after two periods but could not hold it in the third. Mason then stopped eight of nine Boston shooters in the shootout to give the Flyers the 3-2 win on Tuesday night.

Boston came out of the gate strong. They held an 11-5 shot lead at the midway point of the period. Fortunately for Philadelphia, Steve Mason had all the answers.

Philadelphia finally broke through at 13:56 when Michael Del Zotto potted his second of the season. Del Zotto fired a shot home from the point that beat Tuukka Rask to give the Flyers the 1-0 lead. Wayne Simmonds and Travis Konency had the assists.

Claude Giroux extended the lead just under two minutes later. The Flyers captain scored his fifth of the season on the power play at 15:28. Giroux slammed home a one timer from Jakub Voracek. Brayden Schenn had the second assist.

In total, Boston out shot Philadelphia 19-9 for the opening stanza. Steve Mason had 19 answers and the Flyers held a 2-0 after 20 minutes of play.

The second period was a lot slower paced than the first. The Flyers got the benefit of two full power plays while Boston had just one. The teams exchanged penalties at one point giving abbreviated man advantages to both squads.

Boston once again out shot Philadelphia 11-6 in the period and once again Mason had all the answers.

The Bruins would carry 20 seconds of power play time remaining to begin the third.

The Bruins would not capitalize with the man advantage but did not long after it expired. David Krejci scored his third of the season at 4:26 of the third to get Boston to within one goal. Torey Krug picked up the lone assist.

Brad Marchand tied it up just over a minute later. Marchand scored his seventh of the season after Mason made the initial save. Krug and Brandon Carlo picked up the assists.

Just about a minute later Jakub Voracek was awarded a penalty shot. Voracek was unable to convert the free play and the game remained tied.

The Flyers got a late power play when Marchand was called for roughin with just over six  minutes to play. The Flyers were unable to score with the extra attacker.

Boston would get their own man advantage with three and a half minutes to play and like the Flyers were unable to get one home.

The Flyers were outshot yet again by an 11-5 count and paid the price for it as the Bruins early third period goals was enough to force overtime.

In the overtime Mason turned aside all six Boston shots as Rask was only forced to stop one and the teams went to a shoot out.

In the shootout, Voracek and Shayne Gostisbehere scored for Philadelphia while only Brad Marchand was able to solve Mason.

The Flyers are back in action on Thursday when they travel to Ottawa to battle the Senators.