Eagles Flyers Phillies Sixers Union About Us Write For Us
Top 25 Phillies of All-Time: No. 12 - Billy Hamilton
Streak Snapped: Phantoms Win Streak Ends at 8 With Loss to Sound Tigers 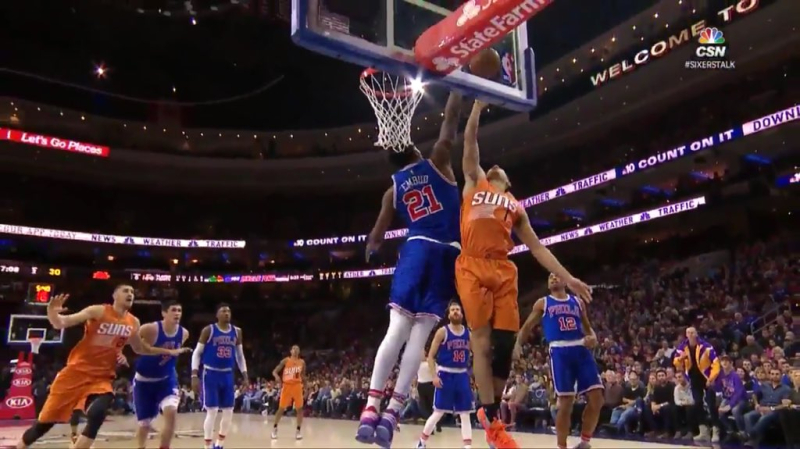 The Philadelphia 76ers defeated the Phoenix Suns 120-105. The Sixers never trailed, and led by as much as 29, as the game started off with a Joel Embiid run. When Embiid wasn't dominating the Suns, Nik Stauskas was. The Sixers led by double digits for a good amount of time. Every time it looked like the Sixers would blow the lead, they managed to get a steal or make a big shot from downtown. Tonight, Philadelphia shot 48.6 percent from beyond the arc and overall made 17 three's, tying a franchise record.

Now, it's time to attempt to contain the excitement threatening to burst this recap into hot sauce flames.

Embiid decided to tell people his ankle was fine after being questionable prior to this one. He scored the Sixers' first eight points, and 10 of 12. He made two 3-pointers during that span. When the Suns called timeout, Embiid had 10 points and the Suns had seven. Embiid did his run within 3 minutes of game time. You can easily see the potential he has to be able to take over games to the Sixers.

By the end of the first quarter, Embiid had over half of the Sixers' points, with 17. The Suns had 19. He did his damage in just under eight minutes of play. He also shot 75 percent from BOTH the field and arc. He grabbed four rebounds and blocked a shot as well. This guy was doing it all out there. He finished the game with 26 points, a career high, along with seven rebounds and two blocks.

Honestly, it's the Embiid recap at this point. Here's a guy that is putting up numbers that players logging 10-15 minutes more put up. If Embiid can put up the same efficiency as he does now with extended minutes, he's going to be a very serious force in this league, as it has already been predicted before.

He can shoot. He dominates the paint. Makes free throws. Defends. Blocks. He essentially does everything and he hasn't played in two years. How in the world are you not excited right now?

Nik Stauskas had himself a night too. It was crazy. He was finishing alley-oops, getting blocks (just one but it was big), and shooting. He finished with 21 points on 89.9 percent from the field.

This is as hot as sauce can be, folks. It seemed like he had been solid all year, so you knew he would eventually breakout and have this kind of performance. It was unreal.

Robert Covington continues to struggle with his shot. However, he's trying to make a difference in other areas. His defense is actually pretty solid. This game, he had two blocks, five rebounds, two steals, and tw0 assists. He touched on many areas of the stat sheet. However, his main game is shooting and, if the shots are not falling...well, just ask the Sixers fans in Wells Fargo Center. He's been booed in recent home games and it's a shame.

For the Suns, they were led in scoring by Eric Bledsoe. He had 27 points with six assists and five rebounds.

Next Sixers game is Monday against the Heat. They beat the sun...now can they take the heat?