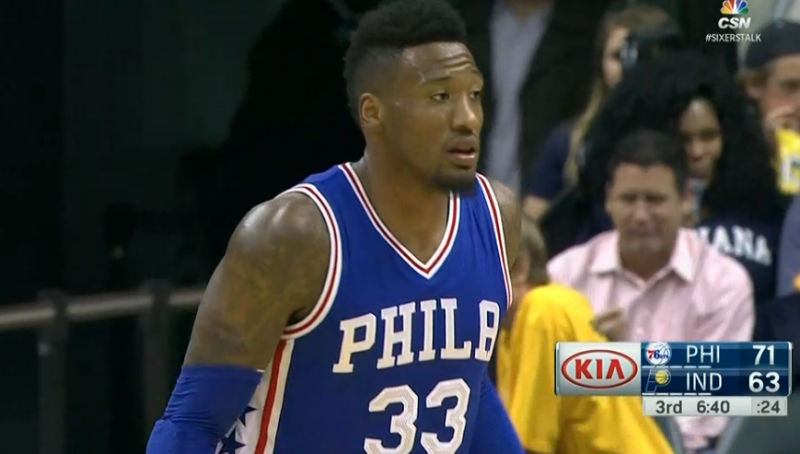 Fresh off their first win of the season, the Philadelphia 76ers (0-7) are in Atlanta for the second half of a back-to-back against the Hawks (6-2). Atlanta defeated the Sixers during Philadelphia's second game of the season at the Wells Fargo Center, 104-72, their largest loss of the season to this point. Heading into tonight, the Sixers will be without Joel Embiid, who led the team to their first victory of the 2016-17 season.

On Friday night at the Wells Fargo Center, the Sixers looked like they might be setting themselves up for another loss, trailing by as many as 14 in the first half. They clawed back to within two at halftime and had a five point lead within 30 seconds to play. The Pacers forced overtime, but Joel Embiid took control en route to the teams' first win. Embiid scored a career-high 25 points to go along with seven rebounds. He scored 14 of the final 24 points for the Sixers and 16 of his 25 points were scored in the fourth quarter and overtime. He simply dominated, getting to the line and hitting big shots down the stretch. Philadelphia also cleaned up their free throw issues, hitting 26 of 31 just two nights after going 9-for-19 from the line. Jahlil Okafor continues to be on a 24-minute restriction and will get the start tonight, splitting time with Richaun Holmes, who scored eight points and grabbed 12 boards on Friday.

Atlanta is coming off of a 115-107 win over the Bulls on Wednesday, where eight players scored in double figures. Thabo Sefalosha led the Hawks with 20 off the bench while they also got double double efforts from both Paul Millsap (16P, 11R) and Dwight Howard (18P, 10R). Without the pressure of having to carry  a large part of the offense, Dwight Howard has settled into his role nicely with the Hawks, averaging 15.9 points, 12.6 rebounds and 2.1 blocks per game.

“We’ve thrown away a lot of close games this year so far,” Nik Stauskas said. “Obviously we didn’t like the way we finished off that fourth, but to fight through that overtime and to still come out with a win, that’s important to us and hopefully we can build off that moving forward.” [CSNPhilly.com]

Joel Embiid on closing Friday's game out in overtime:

“It’s great,” Embiid said. “I’ve been saying that I think we should be 5-2 right now. It just feels great to finally get a chance to close a game out, which we haven’t been doing. I think we’re going to grow.”  [CSNPhilly.com]

“That first win for the group is massive,” Brown said. “I know it’s only one, but you can take a deep breath and go fight again.”  [CSNPhilly.com]

"We executed our last game at home, down the stretch and were able to pull the game out. They executed tonight. They won the hustle game, they had 18 second chance points, 13 offensive boards. We had miscues going down the stretch; our offense was not sharp." [NBA.com]