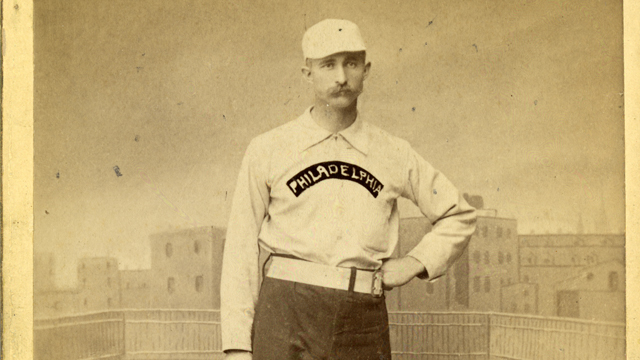 Since Sam Thompson didn't play during the 21st century, not many Phillies fans are going to be very familiar with his career.

Well, actually, Sam Thompson didn't even play ball during the 20th century, at least not in a Phillies uniform.

Samuel Luther Thompson played 15 seasons in Major League Baseball, a full decade of that spent with the Phillies from 1889-98. Nicknamed "Big Sam" because of his unusual height for the period (6'2"), Thompson played mostly right field.

Per Don Thompson for SABR, Sam was born the fifth of 11 children. His maternal great-grandfather had fought in the Revolutionary War under George Washington's nephew, and his father fought in the Civil War with the Union army.

It was during the Civil War that his father, Jesse, had learned to play baseball. Jesse and other returning soldiers brought the game back to Indiana with them at the war's conclusion, and young Sam would learn the game as most kids still do today, from his father.

When a traveling team from Indianapolis came through his hometown of Danville one day in 1884, Sam impressed with two long blasts in leading the local squad to a 9-0 win over the professional visitors. He was signed to a contract that very day, beginning his pro career.

Sam would reach the big leagues with the Detroit Wolverines in 1885, putting his power and speed combo on display immediately. In his second full season of 1887, Thompson led the National League with 203 hits, 23 triples, and 166 RBI while also banging double-digit home runs, not common in that day. He became the very first professional player to record a 200-hit season that year.

After winning a championship in 1887, the Detroit club was folding under financial strain. On October 16, 1888, Thompson's contract was purchased by the Phillies from Detroit for the price of $5,000. He also got married that off-season, with he and his wife deciding to settle in Detroit, where they would remain for the rest of their lives.

Thompson then played for a decade with the Phillies as one of the most feared hitters in the National League. The team frequently won, mostly due to their offensive exploits. But with less than stellar pitching they would not come close to an National League pennant during his years.

Thompson had a chronicly bad back, and that finally caught up to him severely limiting his play in 1897 at age 37, and he would retire from the Phillies and baseball a year later.

Incredibly, Thompson stayed around the game, and in 1906, nearly a decade after his last regular role, he returned to play eight games for the new American League team in his adopted hometown, the Detroit Tigers.

Those games would close his career, but not before he would, at age 46, become one of the oldest players to ever hit a triple.

Interviewed during the 1920's, Thompson's old Detroit Wolverines manager Bill Watkins would call him "the greatest natural hitter of all-time."

In his first 1888 season with the Phils, the big left-handed hitter (he fielded right-handed) swatted an NL-leading 20 home runs. That year he became the first big leaguer to register a 20-20 (steals and homers) season in history.

Over the ten seasons that he wore a Phillies uniform, Thompson registered more than 100 RBI seven times, including NL-leading figures of 147 in 1894 and 165 the following season. He bashed 95 home runs as well, leading the league in both 1889 and 1895.

In addition to those classic power numbers, Thompson also led the National League in hits, doubles, and slugging twice each, and in OPS+ during a a phenomenal 1894 campaign during which he recorded a career high .415 batting average.

Thompson was also known as an outstanding defensive outfielder. He mastered the one-hop throw from the outfield, and was among the league leaders each year in assists and in unassisted double plays.

Though the Phillies registered a half-dozen winning campaigns in the National League during Thompson's years with the team, they never finished higher than third place in the standings. Offensive juggernauts, the team rarely had the pitching to match their bats.

Perhaps the highlight of his career in Philadelphia came during the 1894 season. That year, Thompson was a part of the only outfield group in big league history where all three finished with a .400 plus batting average, and where all three would eventually reach the Baseball Hall of Fame.

Thompson produced a pair of 5+ WAR seasons in 1894-95, and another five years of 2+ WAR. This gave him a total of 13 WAR "points" in our formula as explained below.

He would receive further points for ranking in the Top 25 in a number of Phillies career leader categories. Among those are: Triples (four), RBI (six), Runs (seven), Doubles (11), Steals (12), and Hits (15). He is also tied with Jayson Werth for 25th on the club's all-time home run list.

First, single season WAR is a primary factor in our rankings. According to WAR's calculations, 2+ WAR is considered a starter, 5+ WAR is All-Star caliber, and 8+ WAR is MVP level.
We totaled the number of seasons that a player performed at a 2+ WAR, 5+ WAR, and 8+ WAR level and assigned a set point value for each category, (+1), (+3), and (+5) respectively.
For example, in 1980, Mike Schmidt complied an 8.8 WAR. This was counted as a 2+ WAR season, a 5+ WAR season, and an 8+ WAR season. So, for 1980 alone, Mike Schmidt earned (9) points for WAR.
Second, we assigned a point value for amount of years spent with the Phillies. In order to be considered for this list, a player must have been with the organization for a minimum of (5) years.
Next, we assigned point values for being among the top 25 in particular statistical categories, such as batting average, hits, doubles, triples, RBI, home runs, and OPS for hitters, and ERA, Wins, and WPA (wins probability added) for pitchers.
Finally, all statistical categories were totaled up using our point based system and ranked accordingly, with historical columnist Matt Albertson and managing editor Tim Kelly of Sports Talk Philly reserving the right to move players up the list, within reason. An explanation of why a player is ranked in a certain spot will be provided, as will an overall score breakdown.
Topics
Phillies