Eagles Flyers Phillies Sixers Union About Us Write For Us
Previous month:
November 2016
Next month:
January 2017

Report: Chip Kelly to be Dismissed by the 49ers

Almost a year ago to the day, the Philadelphia Eagles dismissed head coach Chip Kelly, just before finishing his third season with the club.   Kelly was not out of work long; the San Francisco 49ers hired Kelly as their head coach just over two weeks later.  But after less that one very poor season in San Francisco, Kelly appears to be dismissed again for the second time in as many years.

Ian Rapoport of of NFL.com reports that both Kelly and general manager Trent Baalke are headed out the door:

Owner Jed York and the 49ers' key decision-makers are expected to replace both embattled GM Trent Baalke and Kelly, multiple sources say. A full house-cleaning is described as "likely" by several people with knowledge of the situation.

A final decision won't come until after the final gun sounds. But it would be a major surprise if either Kelly or Baalke keep their jobs.

A similar report came from ESPN's Adam Shefter, as well.

Heading into the final week of the season, the 49ers are an NFC West worst 2-13.    Some of Kelly's coaching hires were considered questionable, which could not have helped the club.     The 49ers close the regular season tomorrow at 4:25 EST against the Seattle Seahawks.

Often rumored to return to college coaching where Kelly found success, that may be a better bet now that he was dismissed by two National Football League franchises.  Kelly was linked two offseasons ago to USC, before the job went to Clay Helton.

Another year is just about in the books and the Flyers certainly had a year of ups and downs and their share of exciting and memorable moments and sad moments as well.

We compiled 10 of those moments into a list of signature, standout moments from the year 2016, some of which will stand out in Flyers history for years to come.

Since opening as 6.5-point favorites over the Cowboys, the line for tomorrow's glorified exhibition has shrunk to Philadelphia -4.5. Per Vegas Insider, 57 percent of betting slips have been cast on the 13-2 Cowboys as of Saturday morning.

With one game remaining before Philadelphia's offseason begins, let's dive into the latest edition of the Eagles-Cowboys rivalry.

On Friday, ESPN’s Adam Schefter reported on the Cowboys intentions to play quarterback Tony Romo in Sunday’s regular season finale. However, the veteran is only expected to play “a series or two,” per NFL Network’s Ian Rapoport. With starter Dak Prescott expected to begin the game and also play for just a short while, former Eagle Mark Sanchez is likely to be the primary signal-caller for the Cowboys on New Year’s Day.

Sanchez is a serviceable backup, but has become increasingly mistake-prone as his career progressed. He’ll undoubtedly be highly motivated to perform well against his former teammates, all the while hoping to prove to NFL teams that he’s worthy of an opportunity heading into 2017, but the task will be monumental surrounded by fellow backups against an Eagles’ unit which has suffocated juggernaut offenses such as Atlanta and Pittsburgh at “The Linc” in 2016.

In 7 home games, Jim Schwartz’s unit is allowing a minuscule 15.8 points per game, although they’ve been less formidable of late, surrendering over 24 points per contest in their last three South Philly showdowns.

Cowboys’ superstar left tackle Tyron Smith will sit this weekend after suffering an MCL sprain in last week’s blowout win over Detroit. Backup Emmett Cleary will be protecting the blindside of the Cowboys' various signal-callers on Sunday, an indicator that Prescott likely won’t play past the first quarter given the tenacity of Philadelphia’s front four in the friendly confines of Lincoln Financial Field this season.

Cowboys’ head coach Jason Garrett’s precautionary measures heading into the playoffs aren’t limited to the team’s dynamic offense, many of his defenders will be given time constraints as well. Defensive tackles Tyrone Crawford and Cedric Thornton won’t play on Sunday, nor will DE Demarcus Lawrence. Former Penn State and current Cowboys’ linebacker Sean Lee, an integral cog in the unit, stated that he’ll play on Sunday despite an extensive injury history. Look for Lee and the rest of the Dallas starters to be replaced by second-stringers by the end of the first half.

Carson Wentz and the Eagles produced only 286 yards of offense against a red-hot Giants' defense last week, and were aided by a Malcolm Jenkins pick-six to give Philly a 14-0 lead just six minutes into the primetime tilt, but it was a terrific 7-play, 78-yard touchdown drive by Doug Pederson’s unit on the Eagles’ opening possession that set the tone for Philadelphia’s resounding divisional victory.

Look for Pederson to once again run pint-sized playmaker Darren Sproles behind Lane Johnson early on in the hopes of eviscerating the will of a Dallas team with little to gain by winning this weekend. Johnson’s reemergence into the lineup after a 10-game suspension immensely propelled Philadelphia’s running game for 62 rushing yards on the first possession, but the ground attack only managed 56 additional yards despite leading for the remaining 54 minutes of last Thursday’s win.

Eagles’ halfback Ryan Mathews (back) will miss Sunday’s finale, and top wideout Jordan Matthews is listed as questionable with a nagging ankle injury. With the Eagles short on playmakers, Sproles should touch the ball close to 20 times on Sunday. The Cowboys have yet to allow a 100-yard rusher this season, and considering the Kansas State product’s versatility in the passing game, you can expect to see Sproles sent out on a wide variety of routes in a game plan centered around the 33-year-old.

Player of the Game: Darren Sproles

Deladelphia: A Look at the 87ers' History

Welcome to the city of Deladelphia, where we talk about the Delaware 87ers and the Philadelphia 76ers. Today, we're going to put on a special focus on the 87ers. Let's talk about them for a little bit.

The Delaware 87ers were originally known as the Utah Flash. The Utah Flash was the D-League team of the Utah Jazz (I guess you kinda figured that out). Financial struggles forced the team to shut down in 2011. However, this was actually a good team during its Utah run.

The Flash started in 2007-08 season. They ended after the 2010-11 season. For those four seasons, the team had a winning percentage of .540. They made the playoffs 3 times and won the division title in one season.

Continue reading "Deladelphia: A Look at the 87ers' History" »

Flyers Prospects are a Need, Not a Trade Luxury 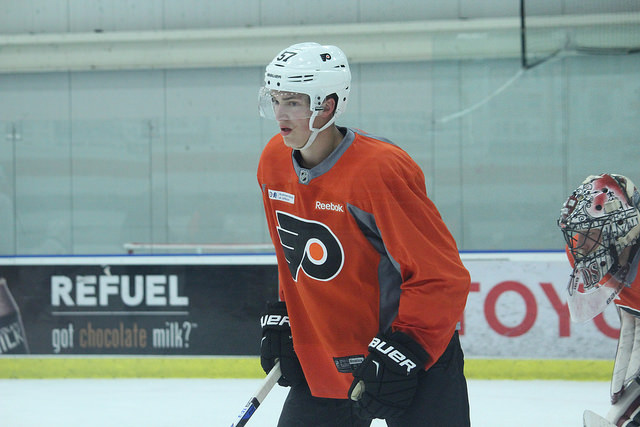 The Philadelphia Flyers are coming off a very successful December going 9-4-1 over the course of the month. Their play during that time has put the Flyers in a great position to make the postseason for the second straight season.

However, with that success comes the talk to get better right now via the trade route. As the games wear on the contenders separate themselves from the pretenders with a flurry of trades in an effort to go on a deep playoff run and capture the Stanley Cup.

With teams like the Colorado Avalanche melting down already and contemplating moving talented young players like Gabriel Landeskog and Matt Duchene elsewhere, it would seem like the Flyers are a logical trading partner.

Before anyone gets too excited, know this: To get a Landeskog or Duchene, the Flyers will have to part with one of their top defensive prospects. Think Travis Sanheim or Philippe Myers in a package that would include additional pieces.

Some fans may want general manager Ron Hextall to bypass his patient process in order to go for it this season, but such a decision would be a grave mistake.

Continue reading "Flyers Prospects are a Need, Not a Trade Luxury" »

When things are going good, the positives can come flowing, and they sure did during the 10-game winning streak the Flyers had to open December.

But December has now come to a disappointing end with losses in five of six games and three straight after the Flyers 2-0 loss to the San Jose Sharks on Friday night. And when that happens, the negatives can be just as easy to identify.

Here are 10 Postgame Points from the loss.

Flyers Shut Out by Sharks for 3rd Straight Loss

For the third straight game, a lack of energy and overall lifeless hockey did the Flyers in. From the start, the Flyers were handed their third straight loss and fifth in the last six games, their worst six-game stretch of the season.

This loss was very much like the first one, right before the holiday break. The Flyers couldn't solve Aaron Dell and the Sharks in a 2-0 loss on Friday night. 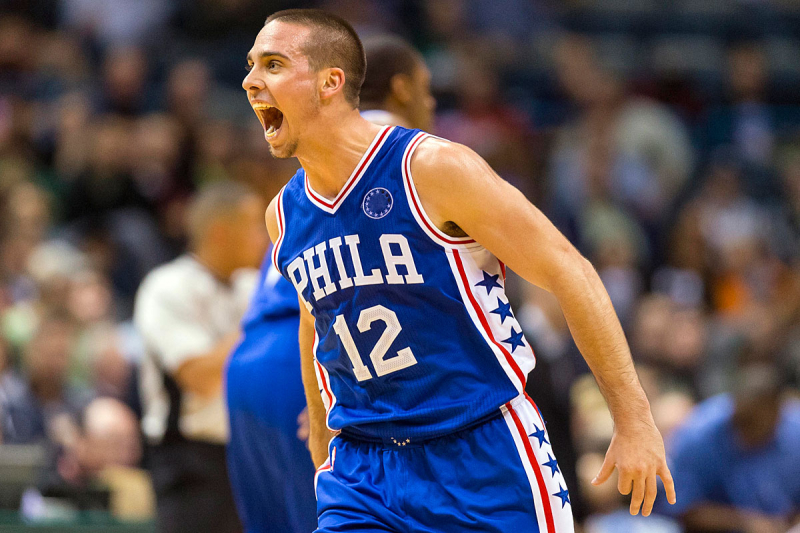 The Philadelphia 76ers won a road game. They beat the Denver Nuggets 124-122. That's enough for celebration. They won a close game without their usual collapse in the 4th quarter. They avenged a close, crazy loss last time they were in Denver. They won to end the year. They won with a depleted roster on the second of a back to back. There are plenty of ways to look at this game. It's all good.

Phantoms Fall in OT to Rochester

The Phantoms claimed a 4-2 win in Rochester on Wednesday night in the first of two games against the Americans this week. The team they defeated on Wednesday was far from the one they saw on Friday night.

The Americans outshot the Phantoms, 40-18, in the game, but needed overtime to claim the 4-3 win from Lehigh Valley.

As the Flyers took the ice on Wednesday in St. Louis, you could tell midway through the third period that they hadn't played in nearly a week. Play in their own end was dreadful, and it led to a complete disintegration in the third stanza en route to a 6-3 loss.
Their road trip continues tonight at SAP Center against an ever-competitive San Jose Sharks squad, who will make a team pay for their mistakes. The Orange and Black are winless in their last three road contests, scoring just four goals, which gives them even more of a battle to fight against a team that has lost just four games on the home 'Shark Tank' ice this season.