Eagles Flyers Phillies Sixers About Us Write For Us
Flyers-Senators: Postgame Points
Top 25 Phillies of All-Time: No. 6, Chase Utley 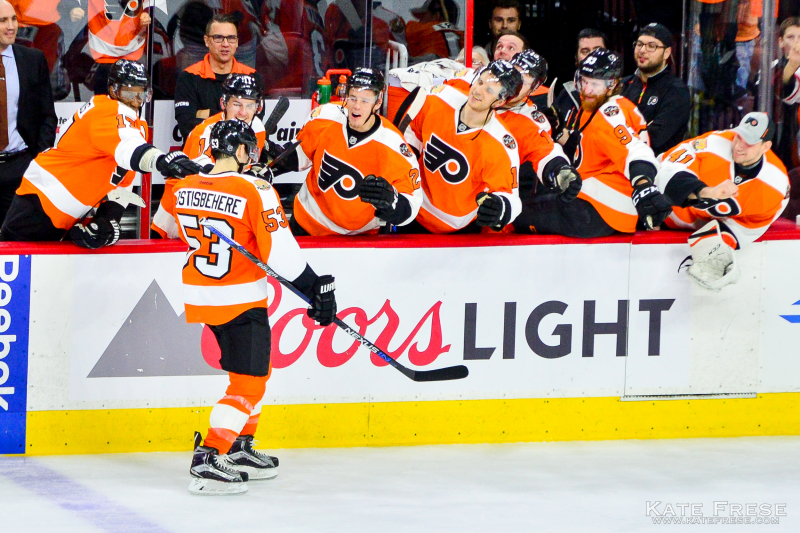 At the 25-game mark of the season, how do the Flyers stack up against the rest of the league?

The Flyers are 12-10-3 with 27 points and are six points behind the first-place New York Rangers in the powerful Metropolitan Division.

Philadelphia has won three games in a row for the second time this season and are 6-3-1 in their last 10 games. Here's a breakdown of the team on both offense and defense through 25 games.

The Flyers have the third best goals per game rate in the NHL.  Scoring 3.02 goals per game, they are only behind the Rangers and Columbus Blue Jackets in goals per game. The Flyers have struggled at 5-on-5, even-strength play, but have managed to have a balanced attack having three players with 20 points or more on the young season.

While the Flyers are third overall in scoring, they are only 24th in 5-on-5 even strength scoring. This is an area they will need to improve on if they wish to make the playoffs and be competitive in the playoff race.

Claude Giroux tallied for his only second 5-on-5 even strength goal on Thursday night against Ottawa, his sixth goal of the season. He also scored the game winning goal in overtime assisted by Jake Voracek and Shayne Gostisbehere.

Wayne Simmonds is one of only five players with double-digit goals and assists in the league. He is fourth in that category with 11 goals and 11 assists, behind only Mark Scheifele, Connor McDavid and Nikita Kucherov.

Philadelphia is also getting substantial support from the blueline. The defensive corps has chipped in regularly adding to the Flyers balanced scoring attack, something they have not had much of in recent years especially as high scoring defensemen such as Chris Pronger, Matt Carle and Kimmo Timonen aged and retired or moved on.

The Flyers have the worst team save percentage in the NHL at .886. Both Steve Mason and Michal Neuvirth have struggled this season. They especially struggled early on as the season began. Mason has played much better of late. In his last seven games he has a save percentage of about .910. He has also steadily improved his goals against average. The Flyers also have the second worst goals against average.

The Flyers finished last season 11th overall on the power play. They have improved significantly this season and currently have the second-best power play in the league.

The Flyers have also allowed six shorthanded goals this so far this season. That is worst in the NHL and undermines their strong performance with the man advantage.

They continue to be mediocre on the penalty kill as they have in the last three seasons. The Flyers are currently 21st on the penalty kill with an 80.5 percent kill rate. Defensive lapses as well as missed opportunities by the goaltenders have contributed to the lackluster performance while shorthanded.

Overall, the Flyers have surprised achieving a high scoring offense, third best in the league. Unfortunately, their struggling defense and goaltending has undermined their high-powered offense, as they are basically scoring and giving up goals at the same rate per game. This leads to many one-goal games and games being decided in overtime or the shootout.

The outlook, particularly of late, has been better, as the Flyers are very close to breaking into the playoff picture with a large portion of the season left to play. But their struggles defensively have cost them extra points as well, making it all the more important that they buckle down defensively while trying to keep the offense performing at a high level to maximize standings points and emerge as contenders in a tough Metropolitan Division.

Lots of great detailed information. Thanks for the nod to the Columbus Blue Jackets. Great article as usual.