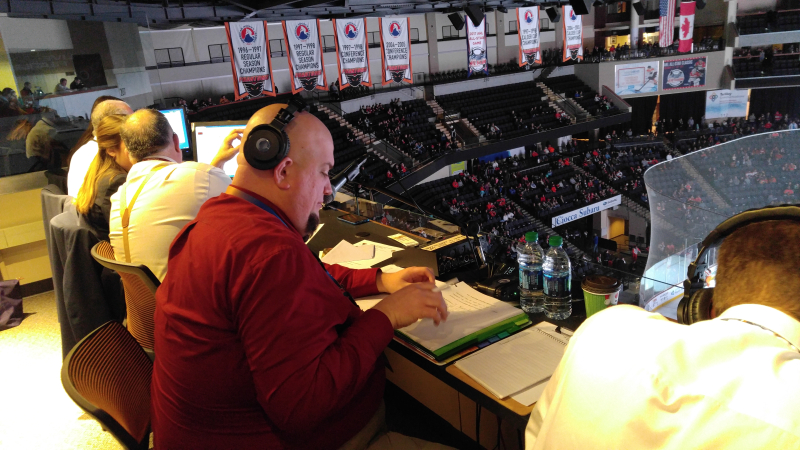 "Good evening ladies and gentlemen, boys and girls, and welcome to the PPL Center!"

That is the first thing you hear over the downtown Allentown home of the Lehigh Valley Phantoms PA system when you attend a Phantoms game. That voice emanates from high above the building on press row, in the off-ice officials box.

That's where you'll find public address announcer Joe Wowk, who's as kind-hearted and friendly as his voice is booming throughout the building.

That voice, along with the in-game entertainment side of every Phantoms game, has earned the Flyers AHL affiliate two straight AHL Business Awards for fan experience at home games in the Eastern Conference.

Wowk grew up in the middle of Northeast Philadelphia, and like most of us Flyers fans, got started on the game we love early.

"My dad's old company he used to work for had front row, second level blueline seats at the old Spectrum," Wowk said.

Joe watched the greats like Mark Howe, a late in his career Bobby Clarke, Brian Propp, and Ron Hextall. Even with three seasons as PA announcer under his belt, Wowk still gets starstruck when any of these legends of Flyer hockey find their way to the PPL Center press box.

Wowk didn't just have influences in sports, he had a lot of broadcast influence as well. Growing up in the 70s and 80s, he saw the switch from the domination of AM to the start of many of the powerhouse FM stations that would survive to today. So Wowk thought his best plan was to combine his two loves, sports and radio, and he decided to join the campus radio station at Millersville University, serving as an on-air DJ and also working as the business and sales manager of the station. He eventually worked his way up to program manager and station director.

Thanks to his college experience, Wowk ended up in radio full-time. Since 1993, Wowk has found himself in radio someway or somehow. At the moment, he balances his duties as the voice of the PPL Center with running his own production company. With his company, he provides voice-tracked radio shows for four different stations across the country, and production services to another in Ohio.

"Literally they send me the music log," Wowk said. "I look at what's on there, they show me where I'm supposed to talk, and I try to make it sound like I'm in New York, Alabama, Texas or Washington, talking about what's happening there."

On top of all of that, his full-time job is as vice president of an ad agency. Needless to say, Joe Wowk is a very busy man.

Wowk then received a phone call from Amy Keller, the Phantoms creative director who was formerly the director of game presentation. She invited Wowk to audition for both the PA job and the in-arena host job.

Wowk became a finalist for the PA job and was given the opportunity to serve as PA announcer for the PPL Center's first hockey game, an Orange vs. White scrimmage between Flyers players.

"First game ever in the building, it's a Flyers on Flyers scrimmage, so it's somewhat of a pro game, get to be the first voice in the building?" Wowk said. "I said absolutely."

Despite an array of technical difficulties, Wowk impressed the team. He served as PA announcer for the final preseason game of that season and was told if he wanted the job, it was his.

"Amy said she was always pulling for me out of the group that was left, because she thought we would work great together," Wowk said. "She was right. She's a heck of a leader. She's been a champion for me and for this club and for the people who work toward everything we do in this department. It's lead us to two titles of being the best in the East and we've really gelled to put on a performance here."

Being from Philadelphia, the inspiration of so many great PA announcers would certainly have an influence on developing a PA voice. But Wowk also acknowledged that the sound throughout the building makes a difference too.

"When I first started talking on the mic here, I wanted to hear how the voice rolled," Wowk said. "When you go into different buildings, it all depends on the roof and how much stuff they have hanging in the ceiling and everything like that in terms of what you're gonna get acoustically in it.

"I have a Philadelphia nasal voice, I know I do, I can't hide it, but in a building like this, it actually works. A deeper voice gets swallowed in this building, and a voice, where you have a bit more nasal, gets amplified."

Wowk used this to help establish his own flare and personality on the mic, including his signature goal calls you hear today. He used the names of some of his favorite Flyers as a kid in his audition call, using the names of Bill Barber, Bobby Clarke, and Rick Tocchet.

"Dan Baker did the Eagles and Phillies, now just the Phillies, and there was Lou [Nolan.] But I also had "The Zink" [Dave Zinkoff] at the Sixers games when my dad's company got those tickets," Wowk said. "I didn't want to be Lou Nolan, I didn't want to try and be Dan Baker or the Zink. I couldn't. I don't want to be. I wanted to be my own signature in our barn that elevated the experience, and the crowd seems pretty responsive to it."

Wowk's signature is his calls of Phantoms goals. He starts with the sing song "Phan-toms!" and the crowd responds with yelling "goal!" followed by Wowk's enunciation on the players names. Wowk can't take credit for the idea however.

"Amy worked with the Florida Panthers, and if you ever hear what they do down there, because you know their "Panth-ers" and we're "Phan-toms," it has similar vocal quality. It was one of those things where they say it and the crowd yells "goal."

The way Wowk calls player names is also something the Phantoms fans pick up on as well. He recalls his favorites of years past being Aaron Palushaj and Rob Zepp, with the difficulty of putting flare on Zepp's name being highlighted.

Wowk is the main voice who carries the games along, and helps gets the crowd into the experience of the games. So being the top fan experience at home games in the entire Eastern Conference is very humbling to Joe.

Bringing the whole thing full circle, Wowk uses his time in radio as the perfect analogy of what's being taking place the last two seasons at PPL Center.

"I'm happy about it because it really reflects on the team and how well we work together, from everyone here up in the production crew, to the ice crew to the fan force who runs around with Bow Tie Ben."

From Amy Keller, who leads from the shadows, to Bow Tie Ben and Joe Wowk out front with the mics, the entire Phantoms production crew runs as a well oiled machine. It's shown in their back-to-back awards for excellence, and the strive for a third straight award.

"It's for the fans," Wowk said. "To know that we're giving them the best that's available out there, that's awesome. If someone knocks us off the perch, we'll find a way to do it better."

The strive to be the best, but be humble while doing it, is something displayed by the Flyers Stanley Cup championship teams from the 70s even today. The same can be said about Joe Wowk, a man who, even after long work weeks and balancing multiple roles, still finds joy in bringing crowds of 8,500 people to their feet in the Lehigh Valley's newest arena.

Whether the Phantoms win a third straight award for best fan experience at home games will have to wait to be seen in July, but new light shows and fan videos may push them to the three-peat they're looking for.

Either way, when you attend a Phantoms game, you'll be sure to hear that booming voice from the man who is living proof that hard work pays off, and a love of sports can bring joy to the lives of many. You may even get to hear Wowk's best and most crowd inspiring call: "Phan-toms Win!" 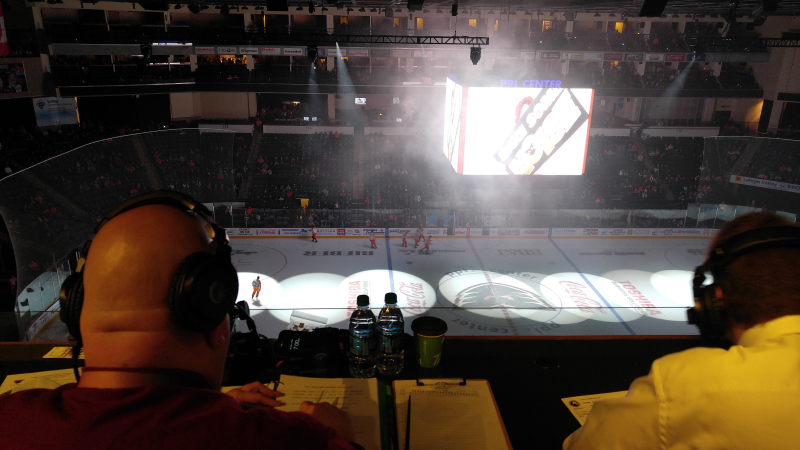