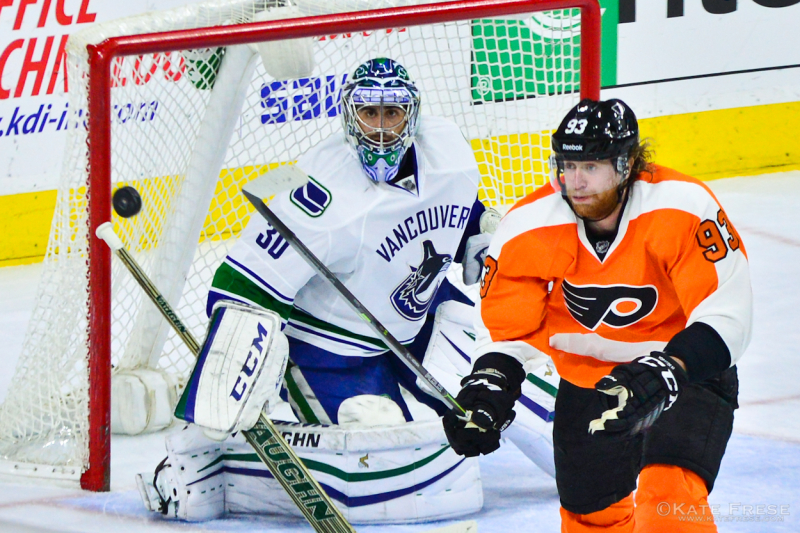 The Philadelphia Flyers (21-16-6) make a brief stop at home on Thursday night to host the Vancouver Canucks (20-19-4). This is the first of two meetings between the two clubs and the lone game in Philadelphia. Opening face off is set for 7:00.

Philadelphia will look to bounce back after consecutive losses. The Flyers fell 2-1 in overtime Sunday in Columbus and followed that up with a tough 4-1 loss in buffalo on Tuesday. In that game, the Flyers fired 40 shots on goal but only managed to put one past Anders Nilsson.

Vancouver is also riding a two game losing streak into tonight's game. The Canucks dropped a 3-1 decision to Calgary on Saturday followed by a 2-1 overtime loss in Nashville on Tuesday.

The Flyers power play has struggled of late. It has fallen from at one point the number two ranked unit in the league to ninth. Wayne Simmonds has a lot to do with the power play success. The "Wayne Train" is mired in a bit of a scoring slump right now although not for lack of effort. IF the Flyers can the train back on track, the power play will be too.
21 year Bo Horvat leads Vancouver in goals and points. Horvat was  selected to participate in his first All Star game earlier this week. Horvat had a seven game point streak snapped in Nashville on Tuesday. The Flyers will hope he does not start another streak tonight.

Steve Mason will make his third straight start between the pipes for the Flyers. Mason played well in Sunday's loss in Columbus and got very little help on Tuesday. Mason will shoulder the load from here on out as Dave Hakstol tabbed him the team's number one goaltender earlier this week.

Ryan Miller will make his fifth start in the last six games for the Canucks. Miller has gone 3-1 in his last four starts allowing two goals or less in each game. At 36 years old, Miller is not what he once was but is still a viable starting goaltender.