In an ideal world, professional athletes would spend 16 hours a day honing their craft — practicing, lifting, working with the trainers, watching film, etc. — and spend the other eight hours sleeping. In reality, players have 24 hours in the day, and many struggle to balance the amount of hours they should spend becoming better players and the amount they should spend enjoying their likely short-lived fame.

According to Geoff Mosher of 4 Philly Sports, during the 2016 season two of the Philadelphia Eagles youngest receivers struggled to find a good balance between enjoying being a celebrity and trying to become better at the thing that actually made them a celebrity:

Now consider that two of their young, potentially promising receivers — Green-Beckham and speedster, rookie free agent Bryce Treggs – are far from locks to be on the 53-man roster when the 2017 season begins. Both made sporadic contributions in 2016 as one-dimensional weapons. According to team sources, both prioritized getting acquainted with the Philly nightlife over outworking their teammates, in practice.

Considering that a year after spending a second round pick on Green-Beckham, the Tenneessee Titans traded Green-Bekcham to the Eagles for just Dennis Kelly, it isn't exactly shocking to learn that he's been less than a model player. He dealt with legal issues in college, which kept him from fulfilling the potential that made him a five-star recruit and ultimately saw him dismissed from the University of Missouri football team.

Green-Beckham is a very mixed bag who at 23 already faces a career crossroads. He's got enviable size at six-foot-five and 237 pounds, but he's a very poor route-runner and doesn't seem to have yet grasped how to use his physical gifts to his advantage.

Still, with one of the league's weakest receiving corps, the Eagles likely won't be in a position where they can move on from Green-Beckham prior to next year. Treggs, on the other hand, could find himself on the team's practice squad next year, if he remains in the organization at all.

Treggs has world-class speed, but had just three catches for 80 yards in his first nine career games in 2017. Two of those catches for 69 yards came against the New York Giants in his first game. After that, Doug Pederson seemed to only value Treggs as a speedy receiver who could run a go-route a few times a game, which more commonly ended with Carson Wentz forcing a bad pass than Treggs making a game-changing play.

The two certainly have every right to enjoy the Philadelphia's nightlife and no one is asking them to entirely refrain from partying. At the same time, it's not a good look to be on a team with notably bad receiving play, be making little impact and then act in a way that leads to someone within the organization leaking information like this.

Both are theoretically early in their NFL careers, so they could very well mature both as people and players. But as Mosher put it, neither is a lock to make the team next season. And when you are on the bubble of making a roster, the perception of your professionalism isn't something that you want to work against you. 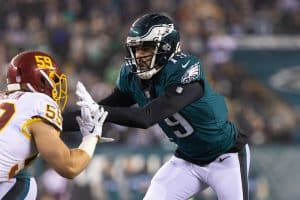