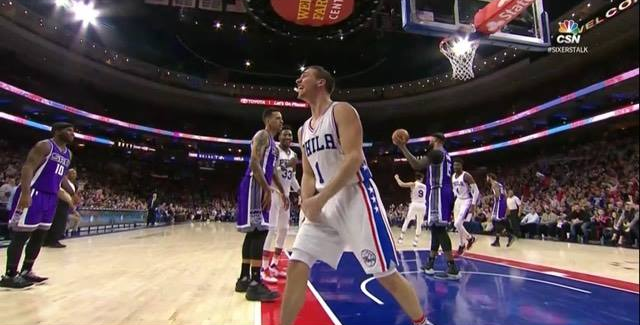 The Philadelphia 76ers (18-29) used a 42-point third quarter to stage an impressive comeback and beat the Sacramento Kings (19-29) tonight at Wells Fargo Center, 122-119. DeMarcus Cousins fouled out in the final minutes and the Sixers held off the Kings to snap their brief two-game skid. Philadelphia looked stale, falling behind big early, but they bounced back and shot 70.8 percent from the floor in the third and scored 74 total points in the second half, their highest scoring half since February 7, 1994, per Brian Seltzer. Sacramento had a chance to tie at the buzzer, but Arron Affalo's open three was short.

With the win, the Sixers finish January at 10-5 , with seven of those wins coming at home. They shot 54.2 percent from the floor tonight, went 21-for-26 from the line, had 13 steals and scored 27 points off 21 Kings turnovers. Despite Cousins' dominant night, Philadelphia won the battle in the paint, 52-46. The Sixers reserves rebounded from a rough game against Chicago on Sunday to score 49 points tonight.

Although Robert Covington missed seven of his 11 three pointers, his play on both sides of the ball made a difference down the stretch. He finished with another double double, 23 points and 10 boards, and also tallied four steals and two assists. Dario Saric was lights out off the bench, scoring 17 points on 8-for-11 shooting while also adding six assists and five boards. Seven Sixers scored in double figures tonight. Nik Stauskas had 16 and hit four of his six three-pointers. Gerald Henderson scored 15 off the bench and hit some big free throws late in the fourth to seal the win. Nerlens Noel hit all five of his shots for 12 points off the bench while Jahlil Okafor finished with 15 points in 22 minutes. TJ McConnell fell one point short of a double-double, but handed out 11 assists in 34 minutes.

DeMarcus Cousins scored 46 points, grabbed 15 rebounds and tallied five assists, but also had eight turnovers and fouled out late in the game. He went 20-22 from the line and made 11 of 16 from the field. He was a dominant force against Sixers big men, out-muscling them for the majority of the game, but unfortunately he had to watch the end of the game from the bench after fouling out.

After cutting a 16-point first half deficit down to single digits at halftime, the Sixers fell behind by 11, 67-56, with under nine minutes to play in the third. Philadelphia put together a ferocious rally to tie the game at 78 thanks to a Nerlens Noel jump shot from just beyond the foul line. The Kings made a three, going up 81-80, but the Sixers responded with a 10-4 run to end the quarter to go into the fourth up 90-85.

The offensive showcase continued, with the Kings beginning the quarter on a 9-4 spurt and the Sixers answering with a 7-1 run of their own to go back in front 101-95. Sacramento wouldn't stay away, pulling back within three with 2:42 to go following a pair of Cousins free throws. With under two minutes to play, Cousins was fouled under the basket again, cutting the Sixer lead to one, 112-111. The Kings were down three and about a minute left and Cousins fouled Gerald Henderson following a steal, his sixth personal, sending him to the bench for good with 46 points. Henderson hit two free throws, putting Philadelphia ahead by five, 118-113.

The Kings, desperate and down by seven, hit two three's inside of 12 seconds to cut the lead to 120-119. They sent Gerald Henderson to the line with 4.9 seconds left and he hit both, putting the Sixers back up by three. Out of the timeout, the Kings had a chance to tie, but Arron Afflalo's three-pointer was short and Philadelphia celebrated with a 122-119 victory.

The Sixers hit the road for a four-game road trip, beginning with a stop in Dallas for a match-up with the Mavericks on Wednesday at 8:30 p.m. Joel Embiid will not travel with the team.