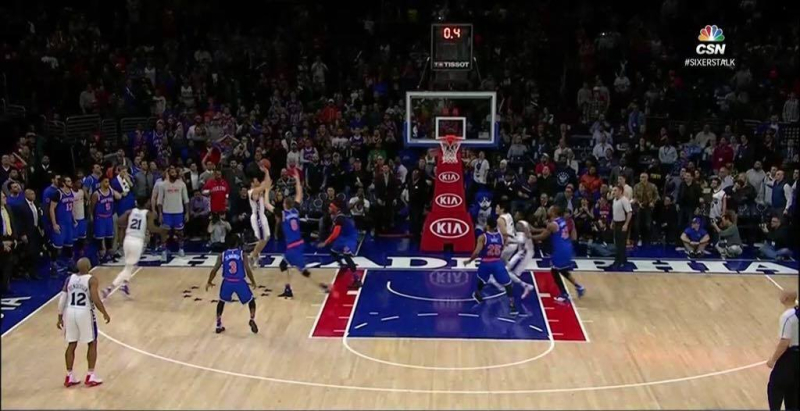 The New York Knicks visited the Wells Fargo Center on Wednesday night to take on the Philadelphia 76ers. The Sixers were coming off of winning three-of-four games as the Knicks lost eight of their last nine. The Sixers and Knicks are known for putting on a great show between the division rivals so it was certain this was going to be a dandy of a game.

The game was back and forth for most of the game with an incredible amount of lead changes, and it wasn't certain which team would keep the edge in any circumstance.

The Knicks went on some runs, and so did the Sixers, and it seemed like all was lost for the Sixers during some points of the game.

The Knicks held a five point lead going into the locker room at halftime, and the Sixers led the final two quarters to come away with the miraculous victory.

The Sixers had three leading scorers from their starting five with Joel Embiid led the scoring with 21 points, Ersan Ilyasova with 16 points, and Robert Covington had 13 points. Nerlens Noel also contributed 13 points off the bench. Embiid's 21 points came with 14 boards, as he once again led the offensive charge.

The Knicks had their share of key scorers, as Carmelo Anthony had 28 points, and Derrick Rose had 25. Kyle O'Quinn was a defensive force with 15 total rebounds on the night.

Key scoring performances by Carmelo and Rose were not enough as the defense faltered on the final play of the contest, a fadeaway shot from the left wing, a buzzer-beating jump shot from T.J. McConnell to seal the deal and take the victory away with force from the Knicks.

Here it is. @TJMcConnell's winner.

The win is the Sixers' fourth win in their last five games and improve to 11-25 on the year. Joel Embiid scared the crowd earlier on in the contest when he rolled his ankle in the first half, but he proved everyone wrong as he played the entire second half with so sign of pain. Embiid's presence has been felt in the last five games and he will need to continue to be the vital organ of this Sixers basketball team if they have any more chance of improving in the weeks to come.

One thing is for sure following this game, the Sixers have finally found that momentum they've been striving for all season long. It's just the beginning for the Philadelphia 76ers.

The Sixers will stay at home and take on the Charlotte Hornets on Friday, January 13 at 7 p.m. ET.