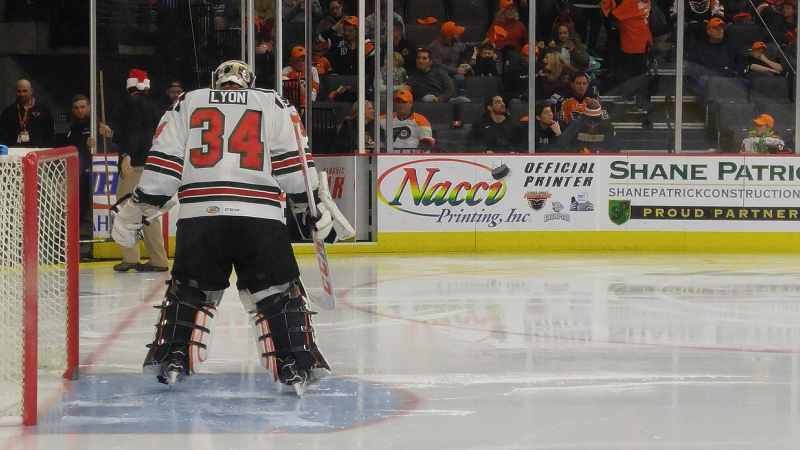 Stellar goaltending, strong defense and an offense that scores at will are just a few parts of the machine that is the 2016-17 Lehigh Valley Phantoms at the halfway point of this season.

That combination has gotten the Phantoms into third place in a stacked Atlantic Division and fourth place overall.

Through 34 games, Lehigh Valley has accumulated a record of 23-9-2 and they have two games in hand on the teams they are trailing in their division, the Wilkes-Barre/Scranton Penguins and Providence Bruins.

Even though Lehigh Valley has a stacked roster, injuries at the NHL level has caused call ups and unexpected stars to get a chance to shine during this break out season for the team. Time to break it down by position and look at the positives, and the negatives, as well as what to look forward to in the second half of the year.

Lehigh Valley started off the season with third-year pro Anthony Stolarz and rookie prospect Alex Lyon as their goalie tandem. Lyon and Stolarz combined to get the team a 9-3-1 record through the first month of the season, with Lyon impressing in his limited time.

Then, the injury bug struck. Michal Neuvirth went down with a knee injury in Philadelphia, causing Stolarz to be called up to the Flyers on Nov. 14. The Phantoms followed suit the next day by calling up veteran Martin Ouellette from Reading, but he would be the one seeing limited time during the absence of Stolarz.

Lyon had said earlier in the year that he would like to play every night and be the guy because he felt more comfortable in those circumstances. He got the chance with Stolarz in Philadelphia and did not disappoint.

Lyon ended up going 13-5-1 during the time between Nov. 15 and Jan. 3, when Stolarz was sent back down. Ouellette only made one start during that time, a Dec. 4 win in Bridgeport over the Sound Tigers.

The decision to stick with Lyon proved the point he made to the media, as the rookie barely blinked under the pressure of being the No. 1 guy. Lyon still leads the league in wins with 16. Stolarz made his return to AHL ice Jan. 6, putting in a strong performance in a losing effort against the Hartford Wolf Pack.

Overall Thoughts: Despite not running a dual-goalie system during the absence of Stolarz, I'd expect the Phantoms to return to one now with their two top goalies back. But if plans go array, Lyon proved he can be the guy going forward if needed. Much like the goalie situation in Pittsburgh, having two top guys is never a bad thing. Only problem is you can't play them both at once.

The Phantoms took a blow out of the gate on the blue line, losing veteran Mark Alt to an upper-body injury during Flyers training camp. Lehigh Valley started the season with Maxim Lamarche and Reece Willcox on the roster as the sixth and seventh defensemen, hoping to keep their spot when Alt returned. Alt did not return until just this past Frida, Jan. 6, so both men had plenty of time.

Plugging that hole for the Phantoms turned out to be the only issue on the blueline, as the main five of T.J. Brennan, Will O'Neill, Robert Hagg, Sam Morin, and rookie Travis Sanheim have combined for 22 goals and 54 assists through those first 34 games. The bulk of those numbers come from the stick of Brennan, who's 11 goals and 19 assists pace the teams defensemen. His 30 points have him at 17th among all AHL scorers, and his six power-play goals are tied among the league lead for defensemen. These numbers have led Brennan to an All-Star selection for the game to be played at the PPL Center, the home rink of the Phantoms.

Big offensive numbers from the back end have helped the Phantoms to their strong start, but their defensive play has been just as dominant. With Alt back in the line up and getting stronger everyday, Lehigh Valley is just becoming a more complete and balanced team.

The Phantoms forwards have put on a show this year, but not all have done as well as the rest. Jordan Weal, who has 11 goals and 33 points in 33 games, and Taylor Leier(, who has seven goals and 21 points in 25 games, were named as All-Stars to round out the teams league leading three selections.

But not all has gone that well for other players. Steven Swavely and Tyrell Goulbourne combined for no points in their 16 total games played for the team, being the only two forwards to suit up for the Phantoms and not register a point.

On the other hand, Greg Carey is tied for third in the league with 17 goals, with 10 of those coming on the power play, which leads the league. Weal is in 7th place amongst the leagues top scorers, at a point a game pace. The team's forwards have combined for 87 goals and 130 assists, an absurd 217 points through 34 games. The Phantoms have scored four or more goals in 19 of their 34 games, going 17-2 in such games. The Phantoms top goal output was eight, in a crazy back-and-forth game that saw them edge out the Bridgeport Sound Tigers, 8-6.

On the other hand, the Phantoms are just 2-8 in games where they score two goals or less. Lehigh Valley has yet to be shutout this season yet however, so as long as the offense explodes, the Phantoms are bound to win. When it doesn't? It could be a long night.

Overall: The Lehigh Valley Phantoms balanced and deep roster has kept them in one of the top spots in the league through half their games, but a divisional foe heavy second half of the schedule will test this team, especially their matchups against instate rivals Hershey Bears and Wilkes-Barre/Scranton Penguins.

Lehigh Valley plays both teams a combined 17 times, 11 of those against the Baby Pens. The Phantoms may prefer that schedule, given the one time they played Wilkes-Barre/Scranton this year, they cruised to a 4-1 win. They haven't had as much success against Hershey, going 3-3 against the Bears.

The Phantoms start the second half of their season with a home-and-home series against their Chocolatetown rivals on Friday and Saturday, getting thrown to the wolves, or Bears rather, to start their difficult second half.

With strong goaltending, offensive-minded defensemen, and forwards with tremendous scoring prowess, the Phantoms are poised to make the playoffs for the first time in seven years and the first time in their tenure in Allentown.

They will have to build of their strong start, and despite a tight schedule, ultimately triumph over big rivals in tough fought games. If they can do that, expect a strong finish for the Lehigh Valley Phantoms, and a Calder Cup playoff run to put the icing on the cake.