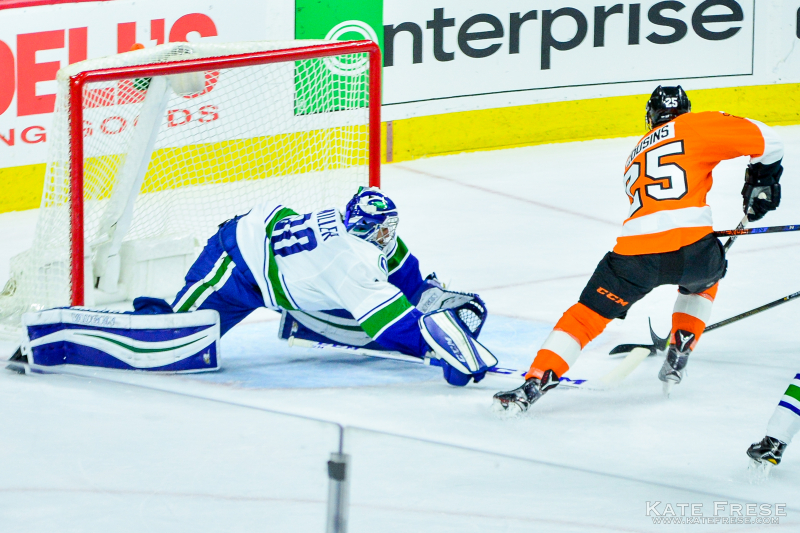 The Flyers came back three times on Thursday night. They trailed 1-0, 2-1, and 4-3. Each time they managed to get the score even. When 65 minutes wasn't enough, the captain decided he had seen enough. Claude Giroux scored the game winning goal in the shoot out to give the Flyers a 5-4 win over Vancouver on thursday night.

The Philadelphia did themselves no favors in the first period. Brandon Manning was called for a four minute double minor for a high stick at center ice. 3:1the t0 seconds later Michael Del Zotto was given the same penalty for the same infraction.

It was with two man advantage that Vancoouver would capitalize. Daniel Sedin, who was the victim of Del Zotto's stick, put the Canucks on the board at 9:20. Sedin fired a shot from the circle that beat Steve Mason. Troy Stecher, and Henrik Sedin picked up the assists.

The Flyers would answer just over five minutes later. Travis Konecny netted his seventh of the season at 14:30 of the period. Konecny scored on the power play as Nikita Tryamkin was in the box for slashing. Dale Weise and Sean Couturier picked up the helpers.

The Flyers found themselves back down a man towards the end of the period when Manning was called for slashing at 18:33. While killing the penalty, Del Zotto again got whistled for high sticking and was sent to the box with nine seconds remaining in the period.

Vancouver was unable to score again before the end of the period but would start the second period with 33 seconds of two man advantage time.

Mason stopped 12 of 13 shots while Ryan Miller stopped seven of eight and the teams hit the locker tied at 1-1 after twenty minutes.

The Flyers penalty killers did a solid job killing off the two man advantage. Just as the Del Zotto penalty expired, Vancouver would take a 2-1 lead. Markus Granlund potted his 10th of the season at 3:51. Bo Horvat and Chris Tanev picked up the assists.

Pierre-Edouard Bellemare got the game tied back up at 9:21. Bellemare hammered home a one timer from Matt Read for his second goal of the season.

Sean Couturier put the Flyers ahead just 18 seconds later. Couturier tapped in a back door feed from Jakub Vorac ek at 9:39. Nick Cousins picked up the other assist on Couturier's eigth goal.

The lead did not last long as Markus Granlund picked up his second goal of the game just 22 seconds later. Granlund walking in on Mason after the Canucks won an offensive zone draw. Jayson Megna and Brandon Sutter picked up the assists.

Brandon Sutter would put Vancouver ahead at 12:46. Sutter took a pass in tight and beat Mason clean for his 12th goal of the season. Troy Stecher and Megna picked up the helpers.

That would be all the scoring in the second and the Canucks led the Flyers 4-3 after 40 minutes.

Philadelphia would start the third with 1:56 of power play time. Brayden Schenn made it count. Schenn scored his 14th goal, (10th of the year on the power play) just 57 seconds into the third. He was able to beat Miller with a one timer from the slot.

Claude Giroux and Wayne Simmonds picked up the assists.

Both teams exchanged third period power play chances but neither team was able to score with their respective man advantages.

The Flyers outshot the Canucks 14-10 in the third but the game remained tied after 60 minutes and off to overtime they would go.

The three on three provided some good action but no goals and the teams would head to the shoot out.

Claude Giroux scored the only goal in the shoot out for either team to give the Flyers the 5-4 victory.