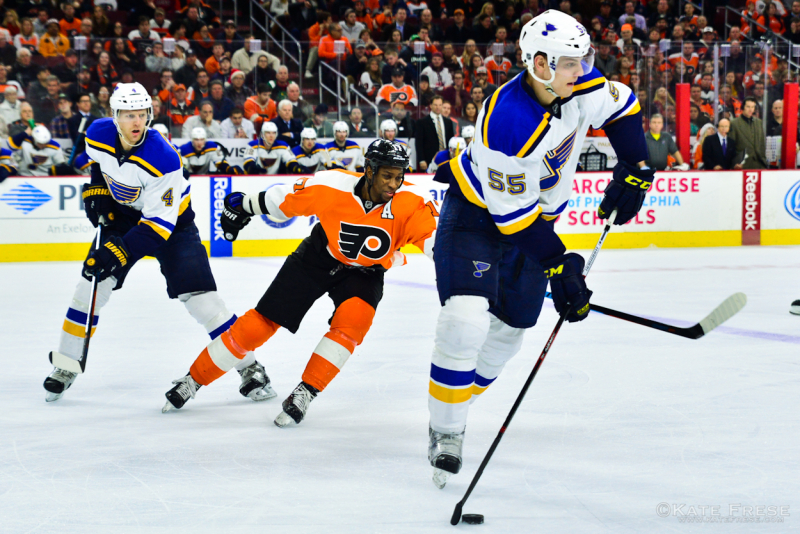 The Philadelphia Flyers (26-20-7) look to rebound from a tough 1-0 overtime loss on Saturday as the host the St. Louis Blues (30-14-7) tonight. This is the second and final meeting between the two teams. Opening face off is scheduled for 7:00pm.

St. Louis is coming off a costly 4-1 loss to Pittsburgh on Saturday. Robby Fabbri was lost for the season with an ACL injury in the game. Fabbri led the Blues victory with a hat trick in their meeting with Philadelphia earlier this season.

Travis Konecny is back in the lineup tonight after spending the last two games in the press box as a healthy scratch. Admittedly, Konecny did not have a good game in Carolina last week. Neither did the rest of the team. Mistakes will happen with veteran players and even more so with rookies. There were plenty of other players who could have just as easily been scratched after that game but Konecny somehow became the odd man out. It will be interesting to see how the youngster responds.

Jaden Schwartz is coming off a horrendous effort against the Penguins on Saturday. The left winger was on the ice for all of Pittsburgh's goals and finished the game  -4. While all of the talk is about Vladimir Tarasenko, and deservedly so, Schwartz is more than capable of putting points on the board. After Saturday's game, watch for him to have rebound effort tonight.

Michal Neuvirth gets the start again for Philadelphia, and he earned it. Neuvirth was outstanding on Saturday against the Kings. If not for his efforts the game does not end up getting to overtime. Numerous times Neuvirth bailed out his teammates after turnovers or breakdowns.

Jake Allen will look to bounce back after allowing three goals on thirty shots in Saturday's loss. Being the number one goalie has proved to be a little too much for Allen at times this season. At times he has been outplayed by backup Carter Hutton.